Natalie Maines, lead singer of the band formally known as the “Dixie Chicks,” declared that President Donald Trump has essentially committed “second-degree murder,” attributing her egregious claim to his response to the coronavirus pandemic.

Natalie Maines lamented what she called a lack of leadership during Monday’s episode of the Howard Stern Show and essentially accused the president of second-degree murder.

“It’s unbelievable…. It’s crazy. It is crazy that we have a leader that is — I mean, it’s murder,” Maines told Stern. “It’s second-degree murder. He’s not having to physically kill people but his ignoring things and speaking complete lies, retweeting that Chuck Woolery tweet, it’s unbelievable.”

“The most outrageous lies are the ones about Covid 19. Everyone is lying,” Woolery wrote in the tweet referenced by Maines. “The CDC, Media, Democrats, our Doctors, not all but most, that we are told to trust. I think it’s all about the election and keeping the economy from coming back, which is about the election. I’m sick of it.”

“I reposted a tweet that a lot of people feel. But all I am doing is making a comment. I’m just putting somebody’s voice out there. There are many voices,” Trump said of his retweet. “There are many people that think we shouldn’t do this kind of testing, because all we do, it’s a trap.”

Maines is no stranger to political controversy. Her band, formerly known as the Dixie Chicks, rocketed to popularity in the 1990s but hit a wall in 2003 after Maines told a crowd overseas that they were “ashamed” that President George W. Bush was from Texas. 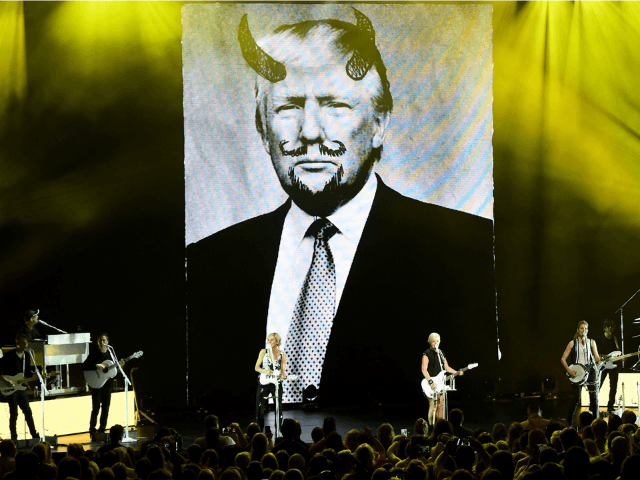 “Just so you know, we’re on the good side with y’all. We do not want this war, this violence, and we’re ashamed that the President of the United States is from Texas,” she told the crowd.

The Chicks have been particularly outspoken since Trump’s presidency. In 2018, Maines slammed Trump as “mentally ill and elderly.”

The “Travelin’ Soldier” singer is far from the first celebrity figure to accuse the president of murder. Earlier this month, left-wing actor and director Rob Reiner proclaimed that Trump was “murdering Americans.”

There’s no other way to say this: Donald Trump is murdering Americans.

Days earlier, Cher stated that Trump was killing Americans “without a thought.”

The Chicks recently made waves after dropping “Dixie” from their long-held band name, as protests over Confederate statues boiled over.