Actress and activist Rose McGowan praised President Donald Trump just one day after he requested the Justice Department to launch an investigation into the death of George Floyd, who died in police custody in Minneapolis this week.

“Credit to Trump for calling for an immediate investigation into George Floyd’s murder,” Rose McGowan said in a tweet this afternoon to her more than 900,000 followers. “Credit to the Minnesota Mayor Frey for calling for immediate arrests. It’s time for righteous anger to move the mountain of white fear. #JusticeForGeorgeFloyd.” 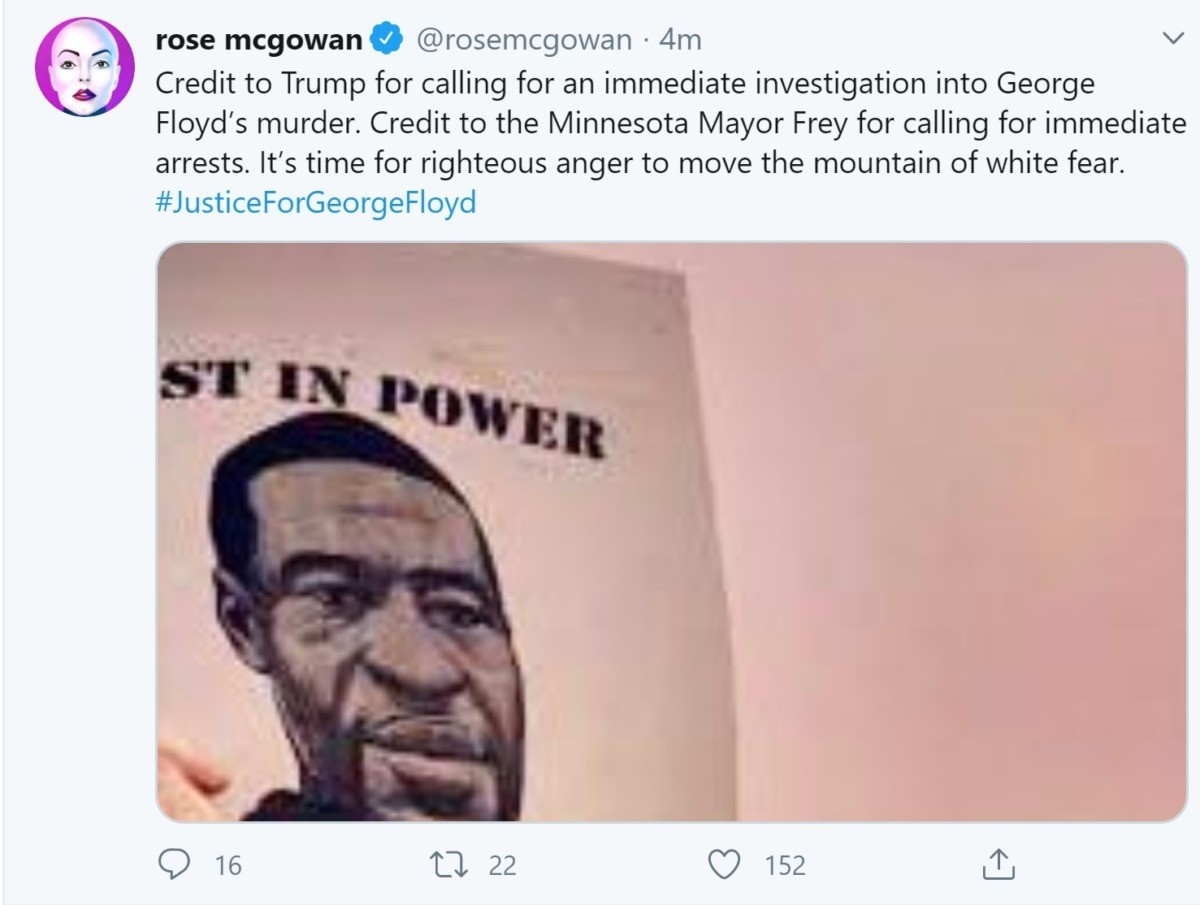 Indeed, President Trump said on Wednesday “At my request, the FBI and the Department of Justice are already well into an investigation as to the very sad and tragic death in Minnesota of George Floyd.”

“I have asked for this investigation to be expedited and greatly appreciate all of the work done by local law enforcement,” President Trump said. “My heart goes out to George’s family and friends. Justice will be served!”

….I have asked for this investigation to be expedited and greatly appreciate all of the work done by local law enforcement. My heart goes out to George’s family and friends. Justice will be served!

As for McGowan, the actress known for her rolls in Charmed and Scream, isn’t one to mince words. She’s called the Democratic Party and the media “a cult.” She used the same word recently to describe Hollywood. McGowan called #MeToo movement activists hypocrites for failing to support women accusing Joe Biden of sexual misconduct. She’s called on Biden to drop his presidential bid over assault accusations from former Senate staffer Tara Reade.

It may very well be the first time McGowan has publicly praised President Trump but she did tell the press last October that Democrats impeaching him won’t work if their goal was to boot him out of office and overturn the 2016 election. “I think he’s going win the second term, and there we are,” McGowan said.

Jerome Hudson is Breitbart News Entertainment Editor and author of the bestselling book 50 Things They Don’t Want You to Know. Order your copy today. Follow Jerome Hudson on Twitter and Instagram @jeromeehudson.