The Department of Homeland Security (DHS) “anticipates being in a position to re-implement [Remain in Mexico] by mid-November — dependent on decisions made by Mexico,” the court document sent to Judge Matthew Kacsmaryk states.

In August, Kacsmaryk ordered the Biden administration to comply with the nation’s immigration law, which requires that migrants who request asylum be held in detention until their claims are decided. That law has been ignored since 2009, allowing roughly four million migrants to walk into the United States, to take jobs, apartments, and school resources away from blue-collar Americans.

The judge had told Biden’s deputies to either detain the economic migrants in the United States or keep them in Mexico until their asylum claims are heard.

In their court response, the agency said Mexico’s government has put conditions on the restart of the program. Those conditions include a six-month turnaround time for asylum hearings, more lawyers for the migrants, and “protections against the return of particularly vulnerable populations.”

But there is no clear public evidence that Biden and his deputies are pressuring Mexico to restart the full program; even there is much evidence that officials are negotiating deals around the migrant flows. 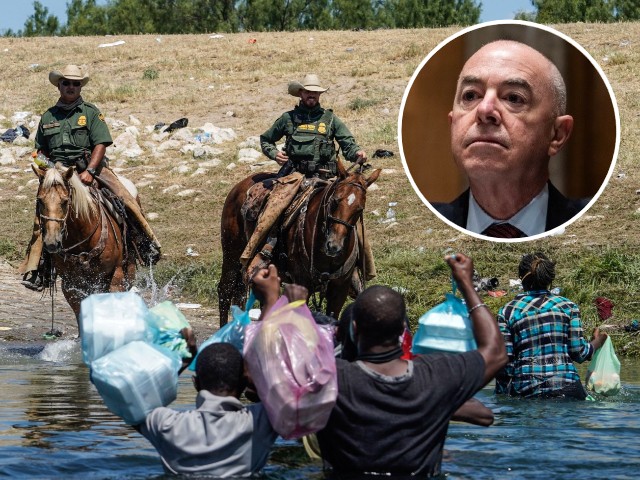 (INSET: Alejandro Mayorkas) A United States Border Patrol agent on horseback tries to stop a Haitian migrant from entering an encampment on the banks of the Rio Grande near the Acuna Del Rio International Bridge in Del Rio, Texas on September 19, 2021 (PAUL RATJE/AFP via Getty Images).

The scale of the promised program is unclear, partly because Biden’s pro-migration deputies — including Mayorkas — deeply hate curbs on foreign migration into Americans’ national labor market.

For example, Mayorkas may try to expand the definition of “particularly vulnerable” migrants to include people who bring their children to the border.

“The new “vulnerability” categories will likely exclude some of the more obvious cases that were supposed to be excluded under Trump; LGBTQ migrants, pregnant women, medically vulnerable children, etc.,” Aaron Reichlin-Melnick, a pro-migration advocate at the American Immigration Council predicted.

Moreover, Mayorkas is already opening and widening many side doors in the border to admit many more economic migrants under various legal pretexts, such as a claimed lack of resources to detain the migrants.

Mayorkas is already offering to fly the children of some illegal immigrants into the United States under the claim that people have a right to family unification. He is also offering work permits to illegals who claim they were victims of crimes, including attacks by other illegal migrants. Mayorkas has also told employers how they can hire wage-cutting illegal migrants without risk of prosecution.

Under Trump, the Remain in Mexico program almost ended illegal migration by breaking the cash flow between migrants, cartels, and U.S. employers. 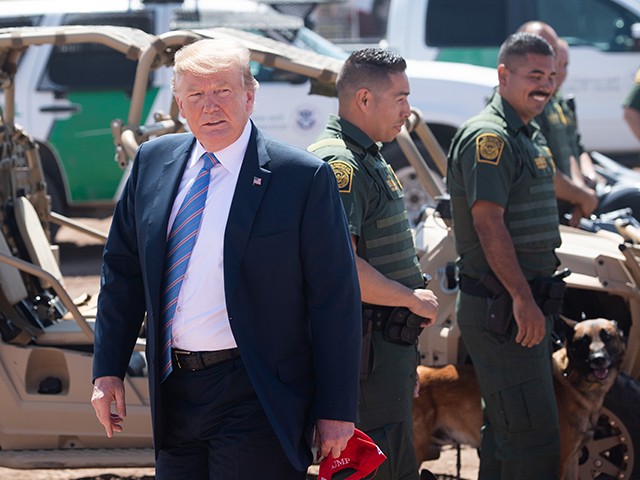 US President Donald Trump speaks with members of the US Customs and Border Patrol as he tours the border wall between the United States and Mexico in Calexico, California on April 5, 2019 (SAUL LOEB/AFP/Getty Images).

Cartels and their affiliated coyotes charge migrants several thousand dollars for making the trip through Mexico and across the border. Many of the migrants cannot afford the fees, so they take loans from cartels or mortgage their homes and farms to pay the smuggling fees upfront.

Trump’s program broke that economic conveyor belt because it prevented migrants from getting U.S. jobs and wages while they wait many months for their asylum pleas to be decided in backlogged U.S. courts.

Once the money exchange was broken, few migrants had any economic incentive to make the journey, and the migrant numbers fell from a record level in 2019 to minimal levels in 2020.

Pro-migration progressives, and their business donors, hate the Trump program. Together, they loudly publicized cases where local gangs robbed and raped migrants returned to Mexico. “Short thoughts; there is no kinder, gentler way to deliver people into the hands of the cartels. You can’t ask the people who wait outside the ports of entry to prey on migrants to ‘pretty please, don’t kidnap these people,'” Reichlin-Melnick declared on October 15.

But the progressives largely ignore the deaths, chaos, and economic damage caused by their eagerness to extract more workers, consumers, and renters from poor countries so they can be used by their donors in corporate America.

Under these particular circumstances, where Defendants cannot meet their detention obligations, terminating MPP necessarily leads to the systemic violation of Section 1225 as aliens are released into the United States because Defendants are unable to detain them.

Most opponents of the border curbs are university-trained, wealthy, upper middle-class lawyers who face little or no economic or political competition from the legal and illegal migrants who are extracted from poor countries by U.S. economic policies.

For many years, a wide variety of pollsters have shown deep and broad opposition to labor migration and the inflow of temporary contract workers into jobs sought by young U.S. graduates. This pocketbook opposition is multiracial, cross-sex, non-racist, class-based, bipartisan, rational, persistent, and recognizes the solidarity that Americans owe one other.

Nationwide, this federal policy of extraction migration is deeply unpopular because it damages ordinary Americans’ career opportunities and cuts their wages. It also raises their rents and curbs their productivity. It shrinks their political clout, widens regional wealth gaps, and wrecks their democratic, equality-promoting civic culture.

Migration also pushes Americans towards addiction and homelessness and minimizes the incentive for elites and employers to help them recover:

How about writing a piece on your own back yard? This video is of Philadelphia, Kensington Avenue with its drug addicts & homeless people. And you are still looking for a story in Mumbai's slum area. pic.twitter.com/5TEpopZ1XZ