“A lot of people have been speaking this week about comparisons to Saigon in 1975,” Cotton told Fox News on August 19, adding:

What increasingly worries me is the scenario of Tehran in 1979 when 52 hostages held by the Ayatollah paralyzed American foreign policy for more than a year. Imagine if the Taliban has effective hostage control of thousands of Americans who are stranded in Afghanistan, it would be a catastrophe. 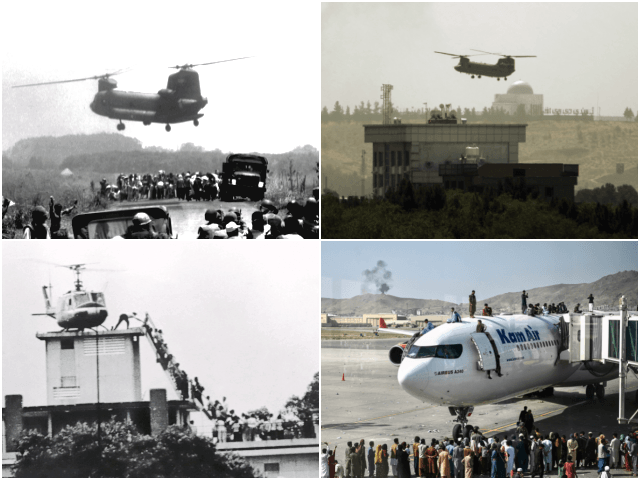 The Taliban government has a huge financial incentive to create a low-key hostage situation with Biden by blocking people — especially Afghans’ families — from getting to the airport, a Hill source told Breitbart News. The withheld population can be quietly and gradually traded to Biden in exchange for political concessions, international aid, and cash, he said.

“This is already a hostage situation,” he said, and it will become clear once U.S. forces leave the municipal airport:

The Taliban will round up the remaining American citizens [and green card holders], they will hold them hostage, and they will use them to extract billions of dollars of additional aid, equipment, whatever, from the Biden administration … They will have things they want, they will get those things in exchange for not publicly executing American citizens or green card holders, and that’ll just be another way they’ll humiliate the Biden administration.

The Taliban government will try to avoid antagonizing Biden, he said. “They know that as long as they have a few American hostages who are stuck there, and if they don’t give public examples of them treating them particularly harshly, then there’s not going to be an appetite in the White House to send more troops back in and actually go on military offensives to rescue them.”

“Even if it was hundreds [of Americans or Afghan-Americans], it’s a huge problem — a few dozen American hostages in Iran hostage crisis paralyzed foreign policy for a year,” he added.

On Friday, Biden told reporters that the U.S. has a deal with the Taliban to allow the exit of “Americans”:

We have no indication that they haven’t been able to get in Kabul through the airport. We made an agreement with the Taliban. Thus far, they’ve allowed them to go through. It’s in their interest for them to go through. So we know of no circumstance where American citizens carrying an American passport are trying to [but cannot] get through to the airport. But we will do whatever needs to be done to see to it that they get there.

Biden’s deal seems to exclude Afghans who do not have an American passport — including Afghans with green cards, or the wives and children of several hundred Afghan commandos who are helping to guard the airport.

American teacher trapped in Afghanistan: “It is insane . . . . They’re not letting anyone in. We are in huge danger and we need help.”

Joe Biden is on vacation and Kamala Harris is MIA. pic.twitter.com/dhMAopuyyF

The Associated Press hinted at a possible swap on August 19, in a report describing the economic difficulties facing the fractious countries of 33 million Afghans and the new government:

Despite their dominant military blitz over the past week, the Taliban lack access to billions of dollars from their central bank and the International Monetary Fund that would keep the country running during a turbulent shakeup. Those funds are largely controlled by the U.S. and international institutions, a possible leverage point as tense evacuations proceed from the airport in the capital of Kabul. Tens of thousands of people remain to be evacuated ahead of the United States’ Aug. 31 deadline to withdraw its troops from the country.

As of now, the Taliban government cannot access almost all of the Afghanistan central bank’s $9 billion in reserves, most of which is held by the New York Federal Reserve. Afghanistan was also slated to access about $450 million on Aug. 23 from the International Monetary Fund, which has effectively blocked the release because of a “lack of clarity” regarding the recognition of a new Afghan government.

The United States has helped to drag Afghanistan towards modernity — which greatly raises the bar for the Taliban government, the AP noted:

When the Taliban last ran Afghanistan two decades ago, the average Afghan survived on less than a dollar a day. Per capita gross domestic product has increased nearly three-fold during the war, according to the World Bank. Afghanistan gained mobile phones, Coca-Cola and Airbnb listings — all of which need access to global economic institutions. The war effort also left the country highly dependent on trade with imports of $8 billion annually, almost 10 times more than what was being exported.

For the moment, Biden and his staff are “spinning … relentlessly to try to convince the American people that everything is okay, the Taliban is cooperating they’re acting like a civilized government when nothing could be farther from the truth,” said Cotton.