Keith Gill, the man at the heart of the GameStop phenomenon, told the House Financial Services Committee that he isn’t a cat.

“Before I go further, I want to be clear about what I am not. I am not a cat,” Mr. Gill said. “I am not an institutional investor. I am not a hedge fund. I do not have clients, and I do not provide personalized investment advice for fees or commissions. I am an individual investor.”

Mr. Gill is known on YouTube as Roaring Kitty. His videos touting his investment thesis on GameStop are credited with helping start the rally in shares that the House panel examined Thursday.

The reference was a play on a viral video of a lawyer whose Zoom filter turned him into a cat during an online hearing.

Shares of GameStop jumped nearly 3 percent as Mr. Gill explained to the committee why he believes the company’s shares are undervalued.

“As for me, I like the stock,” Mr. Gill concluded.

On the WallStreetBets Reddit board, posters often use the phrase “we like the stock.” So this appears to be another call out to the world of memes.

Mr. Gill testified from the red gamer chair featured in many of his YouTube videos. His “hang in their” kitten poster was propped on the screen behind him and adorned with his famous red headband. 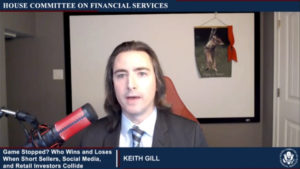