Investigators recruited a cadaver dog as part of the ongoing search of the vast Florida preserve where Gabby Petito’s fiancé, Brian Laundrie, allegedly went before disappearing.

“The Pasco County Sheriff’s Office, which is about an hour and a half drive from the Carlton Reserve, which has been the focal point of the FBI’s hunt for Laundrie since he vanished a month ago, said the human remains detection dog was requested,” NBC New York reported Thursday.

According to a spokeswoman, the dog was brought in at the request of the FBI and the North Port Police Department, adding the sheriff’s office was the only one with that kind of dog, thus it is in high demand.

“The intensity of the Carlton Reserve search appeared to ramp up accordingly,” the outlet said.

Fox 13 shared aerial video footage of the dog at work:

Authorities have not yet found anything, but the Laundrie family’s attorney, Steve Bertolino, said recently the dangerous water in the preserve was receding and “Hopefully, Brian will be located soon.”

“Investigators haven’t said whose card Laundrie is accused of illegally using, but they have said they believe it was used during a time that Petito was already dead. Her remains were found in Wyoming on Sept. 19,” the NBC article continued.

Gabby Petito was strangled, a Wyoming coroner reported on Tuesday.

She died three to four weeks before her body was found near an undeveloped camping area on the border of Grand Teton National Park, Teton County Coroner Dr. Brent Blue said during a press conference. 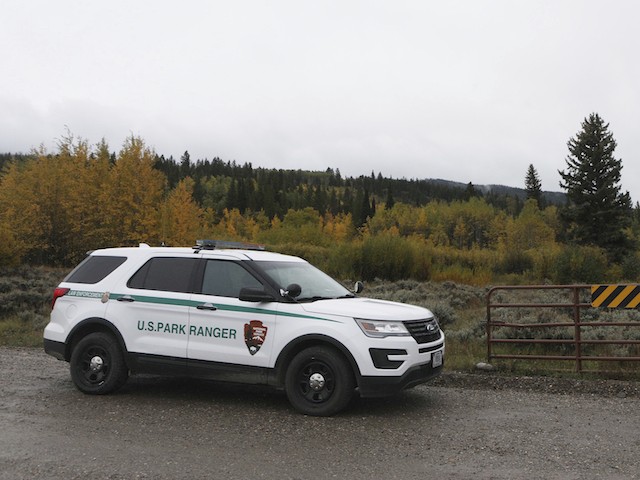 A U.S. Park Ranger vehicle drives on the Spread Creek area is in the Bridger-Teton National Forest, just east of Grand Teton National Park off of U.S. Highway 89 in Wyoming. (AP Photo/Amber Baesler)

“It wasn’t clear if the determination might lead to additional charges against Petito’s boyfriend and traveling partner, Brian Laundrie, who is considered a person of interest in her disappearance and remains unaccounted for,” according to the Associated Press (AP).

The young woman had been on a cross-country journey with Laundrie, visiting Colorado, Utah, and additional states.

However, her parents reported her missing on September 11 when she did not respond to their calls or text messages while the couple visited national parks.