Brian Laundrie, 23, flew home to Florida on August 17, just days after his fight with Gabby Petito, 22, and flew back to Utah on August 23, Laundrie’s attorney says.

“Brian flew home to obtain some items and empty and close the storage unit to save money as [he and Petito] contemplated extending the road trip,” Laundrie attorney Steven Bertolino wrote, according to the New York Post.

Laundrie’s flight home on August 17, came just days after the fight between Petito and Laundrie, which was captured on bodycam footage by police in Moab, Utah, on August 12. 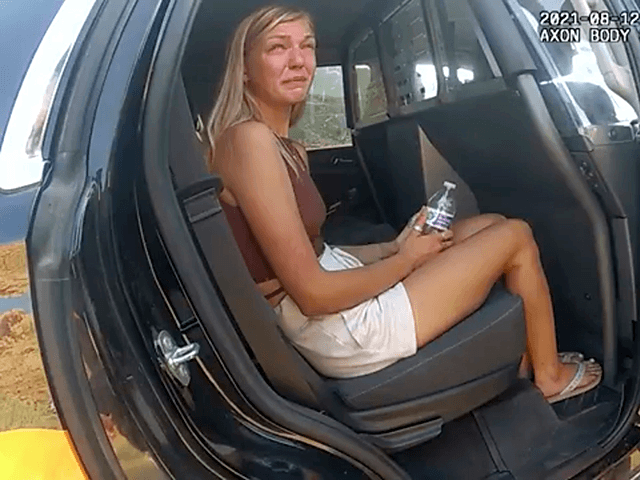 This police camera video provided by the Moab Police Department shows Gabby Petito talking to a police officer after police pulled over the van she was traveling in with her boyfriend, Brian Laundrie, near the entrance to Arches National Park on August 12, 2021. (Moab Police Department via AP)

In the footage obtained by Fox News, Petito told officers Laundrie had laid his hands on her during the fight between the couple. “Well he, like, grabbed me with his nail, and I guess that’s why it looks — I definitely have a cut right here,” she said. “I can feel it. When I touch it, it burns,” Petito told officers.

After nearly a week, Laundrie flew back to Utah to “rejoin Gabby” on August 23, according to New York 4.

On August 19, Petito posted an image to Instagram that appears to show Laundrie with her, but it is now known when the photograph was captured.

“To my knowledge, Brian and Gabby paid for the flights, as they were sharing expenses,” Bertolino wrote, according to the New York Post.

Witness reports suggest Petito and Laundry dined at a Wyoming restaurant on August 27, according to the New York Post.

On September 1, Laundrie returned to his parents’ home in North Port, Florida, alone and with Gabby’s van the Post reports. Just days later, the family went camping on September 6 and September 7 at Fort De Soto Park in Pinellas County, Florida, according to Laundrie’s attorney.

The parents of Brian Laundrie, the person of interest in the disappearance of Gabby Petito, said they do not know their son's whereabouts. https://t.co/kQgepOzQeU

Laundrie was reported missing soon-there-after on September 17. His parents say he went hiking three days earlier, on September 14, at the Carlton Reserve in Florida.

On September 11, Petito was reported missing by her family. The remains of Gabby Petito were discovered on September 19 at the Bridger-Teton National Forest in Wyoming.

Teton County Coroner Dr. Brent Blue’s initial determination of the cause of Petito’s death was homicide according to Breitbart News. Final autopsy results have not yet been released.