While audio of the initial 9-1-1 call from a third party and bodycam footage of the subsequent traffic stop with Petito and Laundrie were previously made public, it was not clear what details Moab Police officers knew before speaking with the couple on Aug. 12.

The outlet obtained audio of the dispatch radio traffic, wherein a dispatcher told police details regarding the initial witnesses’ report.

“RP [reporting party] states a male hit a female. Domestic. He got into a white Ford Transit van. Has a black ladder on the back. Florida plate,” the dispatcher noted prior to citing the license plate’s number. “The female who got hit, they both — the male and the female — both got into the van and headed north.”

In the police report of the stop, a responding officer said he believed “it was reported the male had been observed to have assaulted the female,” but eventually noted, “no one reported that the male struck the female.”

In addition, the police officer described the event “more accurately as a mental/emotional health ‘break’ than a domestic assault,” adding, “no significant injuries” were reported.

Petito was last sighted approximately two weeks later when the pair went to Salt Lake City and Ogden, and eventually to the Teton area of Wyoming.

The body discovered September 19 near a Wyoming national park belonged to Petito, who disappeared amid the cross-country trip with her boyfriend, the Teton County coroner confirmed Tuesday.

“Teton County Coroner Dr. Brent Blue said the initial determination of Petito’s body is that her death was a homicide. Final autopsy results have not yet been released,” Breitbart News reported.

Laundrie was named a person of interest in the case.

Petito had been living with Laundrie and his parents in North Port, Florida, when they embarked on the trip. However, authorities said she was not with Laundrie when he returned home to Florida on September 1. 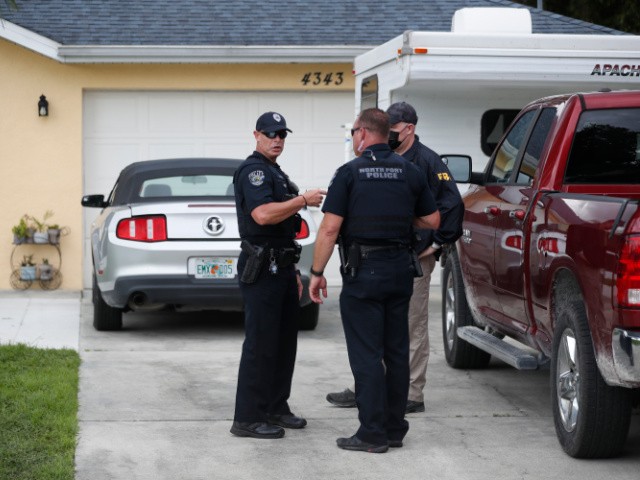 An FBI agent talks with a North Port officer while they collect evidence from the family home of Brian Laundrie, September 20, 2021, in North Port, Florida. (Octavio Jones/Getty Images)

Laundrie reportedly went hiking in Florida’s Carlton Reserve on September 14 but has not been heard from since, and his family members later reported him missing, according to Breitbart News.

He was still missing as of Fox 13’s Sunday article and his last known location was reportedly the nature reserve.

“Court documents out of Wyoming say once Laundrie is taken into custody, he should be held in jail without the possibility of bail because he is a potential flight risk,” the outlet concluded.