The first winter storm of the season is bringing much-needed precipitation in the form of snow to drought-stricken western states. The storm is expected to bring up to 24 inches to Idaho, Montana, Wyoming, and Colorado.

Weather stations across the northwestern parts of the United States report early snowfalls coming from the first winter storm of the 21-22 season. The snow is already bringing some moisture to a region of the country suffering from historic drought conditions.

WINTER STORM | The first major winter storm of the season is taking shape across the western half of the U.S. today. This storm could drop some substantial snow in the Black Hills and west of the Continental Divide. #winter #snow pic.twitter.com/mfH4iaXjVs

Approximately 100 winter storm warnings have been issued across 4 U.S. states, where snow totals will be measured in the feet:https://t.co/BZWlM2Bctp

“It’s definitely not a rare thing to be getting snowstorms in October, that’s when it starts becoming more likely to be getting snow,” National Weather Service Boulder, Colorado, Meteorologist Caitlyn Mensch told CNN. “I know the average for Denver is October 18 for the first snowfall and it definitely varies depending on where you are in the mountain.”

We got absolutely pounded last night in Hyrum. As I take these pictures branches are falling all around me. It’s a war zone. #UTWX pic.twitter.com/Q4j4hEsh5T

The early snowfall brings some hope to many areas of the West suffering from the extreme drought conditions that are impacting nearly the entire region.

“We are hoping to get more precipitation in the mountains going into this winter season, but a lot of that is going to depend on how the larger-scale systems set up, which is harder to tell farther out,” she stated.

An early winter storm is forecast to bring the first heavy snowfall of the season to portions of the U.S. Rocky Mountains this week. The National Weather Service on Monday issued winter storm warnings for large areas of Wyoming and southern Montana. https://t.co/6tp0VuDpDL

Weather forecasters issued Winter storm warnings in parts of Colorado, Idaho, Montana, Utah, and Wyoming, according to USA Today. Officials predict one to two feet of snow in some of these areas.

Earlier this year, Breitbart News reported that drought-monitoring officials said nearly 98 percent of the West is facing some level of drought conditions. As of June 16, more than 26 percent of the West is experiencing exceptional drought — the most intense level, according to a report from U.S. Drought Monitor published by AGWeb.com. 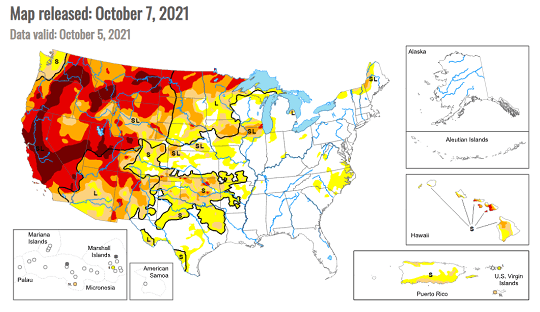 “As the 2020-21 water year ended, several places set records for driest years ever recorded,” drought monitoring officials at the University of Nebraska-Lincoln stated. However, drought conditions in some areas of the West improved slightly as the summer came to a close.

From Montana to Nevada, snow fell in the western U.S. from Sunday into Monday, creating some very early winter wonderlands. https://t.co/uPWmeHTMGH

The winter storm, now impacting Idaho, Utah, and Montana, is expected to move into the Dakotas by Wednesday, officials forecast.