Officials in Del Rio told Breitbart Texas on Friday that they are no longer detaining any of the migrants in the camp under the Del Rio International Bridge. A photo provided by a source within U.S. Customs and Border Protection shows the now-empty site. Bulldozers and other heavy equipment moved in Friday to clearing the grounds covered with makeshift shelters and garbage.

Breitbart Texas reached out to Department of Homeland Security officials for information regarding the migrants who had been detained for many days in squalid conditions under the bridge. An immediate response from DHS or CBP was not available. 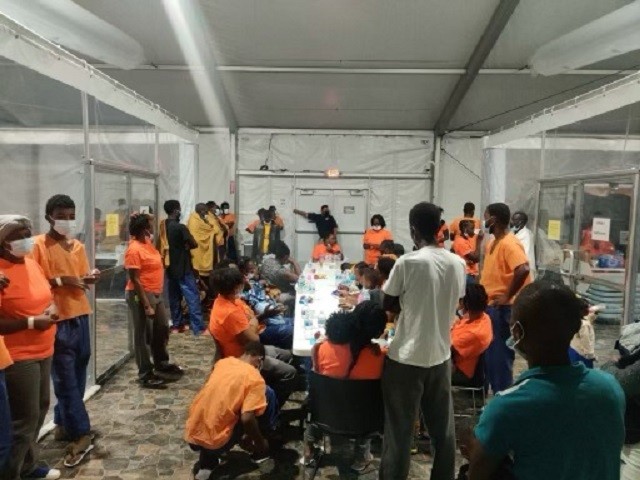 A group of Haitian migrants dine in a Border Patrol detention facility in the Tucson Sector on September 24. (Photo: U.S. Border Patrol )

Breitbart Texas also learned that Border Patrol is detaining a total of approximately 4,500 Haitian migrants in custody at various detention facilities with their control. This includes more than 2,000 to other Texas Border Patrol sectors.

The source noted that children born of Haitian parents living in Chile or other countries may not be counted as Haitian nationals in the figures noted above.

On Thursday, DHS officials reported they had flown 17 repatriation flights to Haiti since Sunday. Those flights returned just under 2,000 Haitian nationals to their home country.

Nearly 4,000 had been removed from the camp to other locations within the purview of CBP.

The number of migrants who voluntarily returned to Mexico has not been disclosed at this time.

Randy Clark is a 32-year veteran of the United States Border Patrol. Prior to his retirement, he served as the Division Chief for Law Enforcement Operations, directing operations for nine Border Patrol Stations within the Del Rio, Texas, Sector. Follow him on Twitter @RandyClarkBBTX.