U.S. Customs and Border Protection employees are making last-minute preparations for a potential response required to answer the threat Hurricane Ida poses to the greater New Orleans area. CBP’s Air and Marine Operations, Border Patrol, and Office of Field Operations teams are strategically pre-positioning manpower and resources as the area braces for Ida on the anniversary of Hurricane Katrina’s landfall in 2005.

Border Patrol Chief Brian Hastings of the Rio Grande Valley Sector will serve as CBP’s Lead Field Coordinator for FEMA’s Region 6 area and coordinate the agency’s response efforts, according to a CBP spokesperson. Thus far, CBP has prepositioned supplies, Air and Marine Operations assets, and personnel at locations in Florida, Texas, and Louisiana. 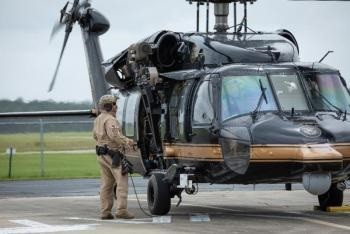 The agency is prepared to deploy its fleet of aircraft, which include Blackhawk helicopters and P-3 AEW aircraft if needed, the spokesman stated. In addition, the agency will deploy Border Patrol personnel trained to operate marine platforms that include riverine shallow-draft vessels (RSDV) and traditional airboats.

Along the southwest border, where CBP is dealing with the current border crisis, special operations personnel with the Border Patrol have been placed on standby and have readied equipment and supplies needed to respond if necessary. The Border Patrol’s tactical response team (BORTAC) and rescue unit (BORSTAR) train continuously to operate in harsh border environments.

Incident Management Assistance Teams are on the ground working alongside our @MSEMA partners in advance of #HurricaneIda. Follow guidance from your local officials and finalize your preparedness plans today. https://t.co/tylLCuS7pz pic.twitter.com/x6gehH7iu6

CBP personnel are no stranger to natural disasters. In response to Hurricane Katrina, nearly 300 employees of the agency responded to assist with rescues, recoveries and to provide humanitarian relief in the aftermath. Some of those employees are still with the agency and prepared to respond again.

The greater New Orleans area is home to several hundred CBP officers and support personnel who live and work in Hurricane Ida’s path. This will present another challenge for CBP. The agency’s spokesperson says they are concerned for the employees who live and work in the region. Employee resiliency efforts are an important part of the preparations as Ida makes landfall, according to the CBP spokesperson.

“We have to make sure our employees and their families are accounted for and safe,” CBP stated in response to an inquiry from Breitbart News. “That will be our priority initially so that they can begin to assist others once we know their families are taken care of.”

In addition to support personnel, CBP employees in the area consist of Border Patrol agents of the New Orleans Sector and CBP Office of Field Operations who, among other tasks, inspect arriving vessels at the port of New Orleans.

As part of a whole-of-government approach, CBP response teams will coordinate operations with more than 2,000 FEMA employees deployed to the region as residents brace for IDA’s arrival.

President Joseph R. Biden, Jr. already approved emergency disaster declarations for Louisiana and Mississippi to help FEMA quickly respond to the needs of the residents in the region.