Border Patrol agents in the five Texas-based sectors apprehended 146,212 migrants in July who illegally crossed the border from Texas. This represents more than 73 percent of all migrants apprehended last month in the nine southwest border sectors. It also represents an increase of percent over June’s 126,485 apprehensions. 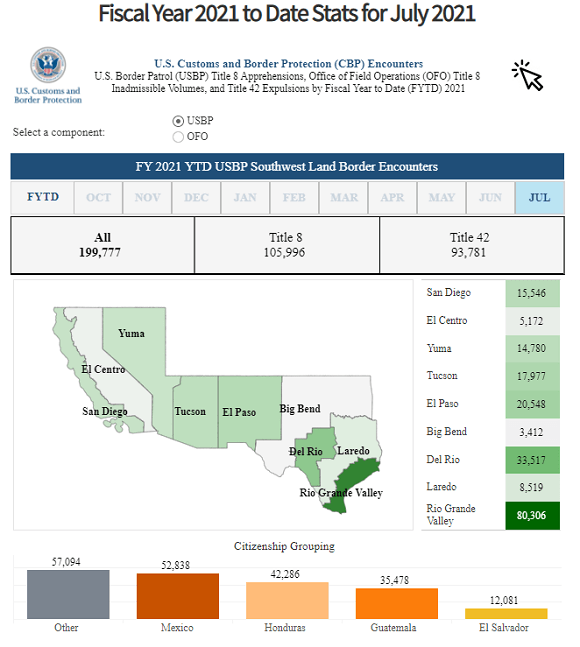 While Texas is host to five of the nine southwest border sectors, the apprehension of migrants in these sectors accounts for 73 percent of the total apprehensions along the U.S.-Mexico border. The July apprehensions also show an increase from one month earlier of 16 percent.

Breitbart Texas reported last month that during the first nine months of Fiscal Year 2021 (which began on October 1, 2020) the Texas-based border sector agents apprehended more than 732,573 migrants. That number now stands at 878,785 apprehensions in ten months.

Agents in the Rio Grande Valley Sector in southeast Texas continue to lead all Border Patrol sectors with the apprehension of 80,306 migrants. These include 48,464 family units,20,803 single adults, and 11,036 unaccompanied children.

The Del Rio Sector jumped into second place with the apprehension of 33,517 migrants including 21,079 single adults, 11,567 family units, and 881 unaccompanied minors.

During a visit to the Rio Grande Valley Sector last week, Department of Homeland Security Secretary Alejandro Mayorkas told reporters, “The situation at the border is one of the toughest challenges we face. It is complicated, changing, and involves vulnerable people at a time of a global pandemic,” Breitbart reported. He attempted to blame the Trump administration for the surge in what he called the “cruel policies of the past administration.”

Breitbart Texas’ Randy Clark, a 32-year Border Patrol veteran, responded to Mayorkas visit, saying, “Mayorkas failed to address the impact of thousands of migrants being detained in inhumane conditions due to the sheer volume of traffic crossing the southern border — a level that has overwhelmed available resources at all levels of government.”

Many of the migrants being released by the Border Patrol are being placed on buses without being tested for the coronavirus and transported to major cities across Texas.

“What we’re doing is coordinating with the EMC, the emergency management coordinators, in Austin and Houston, and I believe even Dallas, too,” Laredo Mayor Pete Saenz, a Democrat, told reporters. “Then, it’s really up to them to continue offering PPEs, masks, hygiene, whatever they require.”

“The reason why we don’t do testing is that once you test, there’s an obligation,” Saenz explained. “If they’re positive, we’re told that you have to quarantine. We don’t have the infrastructure for that.”

“Border Patrol was very clear that they were just going to put them out in the street, in our plazas. And, of course, we couldn’t have that,” Saenz told reporters.

“I know some people may say, ‘you’re basically transporting untested people to other cities.’ And the answer is ‘yes,’ the border mayor concluded, “But what alternative do we have here, locally?”