Laredo Sector Border Patrol agents found a group of 16 migrants locked inside a conex box on a rail car in South Texas. The migrants were locked with no masks, limited ventilation, and no means of escape.

Hebbronville Border Patrol Station agents conducting rail car security operations over the weekend found a group of migrants locked inside a conex box on a rail car, according to a report by KGNS in Laredo. 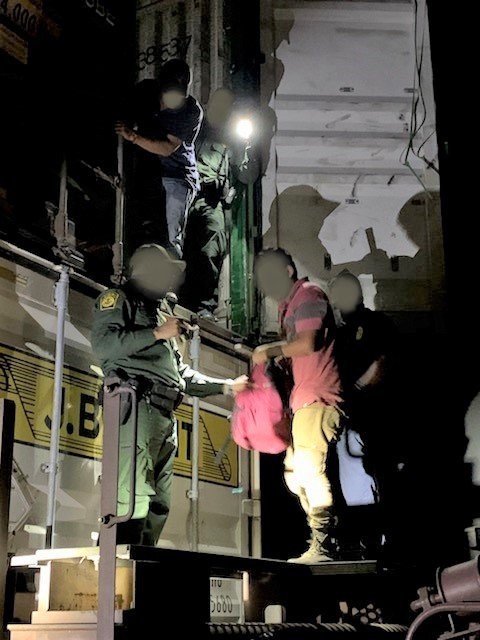 The agents conducted an immigration search on a train near Hebbronville, approximately 50 miles inland from the U.S.-Mexico Border. During the search, the agents found 16 migrants.

Photos provided by Laredo Sector Border Patrol agents show none of the migrants wore masks to help prevent the spread of COVID-19 while they were locked inside with limited air circulation.

“This dangerous method of illegal entry into the United States can result in serious injury or death,” Laredo Sector Border Patrol officials said in a written statement. “The Laredo Sector Border Patrol continues to warn against the dangers of people crossing illegally into the United States through dangerous and hazardous means.”

Finding migrants being smuggled on trains is not unusual for the Laredo Sector’s Hebbronville Station agents.

In September, Laredo Sector Chief Patrol Agent Matthew Hudak tweeted photos of a group of 13 migrants who were locked inside a grain hopper rail car. He said the group were trapped inside a confined space and could not have escaped.

Hebbronville agents encountered another train case in which smuggled aliens were trapped inside a confined space; completely locked and unable escape. Potentially deadly tactics used by smugglers continue to put the aliens and their rescuers at significant risk. @CBPSouthTexas pic.twitter.com/mqw7GS1QGh

A few weeks earlier, Hebbronville Station agents found a group of 11 migrants in another grain hopper smuggling incident. One of the women locked inside the rail car tested positive for COVID-19. Temperatures inside the rail car exceeded 106 degrees at the time of the rescue, Breitbart Texas reported.