Laredo Sector Horse Patrol Unit agents apprehended 125 migrants in a 12-hour period last week. The arrests come amid a growing border crisis where large numbers of migrants are crossing in hopes of being released into the U.S. interior under Biden Administration policies.

Laredo Sector Horse Patrol Unit (HPU) agents assigned to the Hebbronville Station apprehended 60 migrants during the 12-hour period last week. During one incident an unmanned aerial system operator helped guide the HPU agents to a group of 17 migrants, according to information provided by Laredo Sector officials. In another incident, the HPU agents assisted other agents in the apprehension of eight migrants on a freight train. 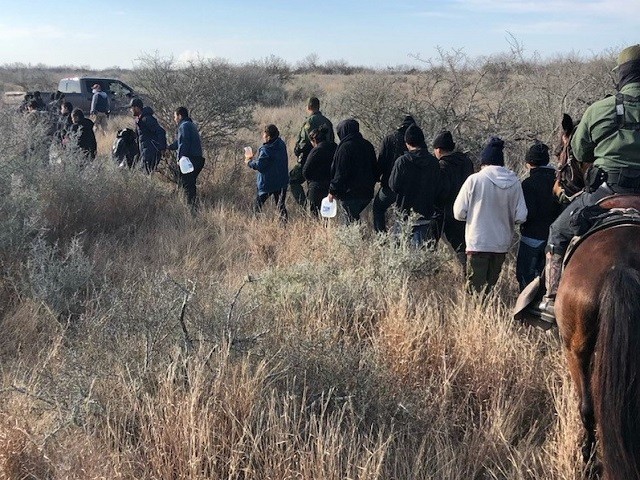 Elsewhere in the sector, Laredo South Station HPU agents teamed up with agents on ATVs and apprehended multiple migrants on a ranch near the Rio Grande. The agents arrested 57 migrants. They also arrested a U.S. citizen juvenile working as a bush guide for the smuggled migrants. Agents turned the juvenile over to Laredo Police Department officers.

Officials said the HPU is composed of 29 adopted Mustang horses. The sector acquired the Mustangs from the Bureau of Land Management’s Wild Horse and Burro Program. Officials with the Colorado Correctional Industries Wild Horse Inmate Program provided training for the horses.

“The outstanding work by our Horse Patrol Unit illustrates why their mounted operations continue to be an important tool in our border security operations,” Laredo Sector Chief Patrol Agent Matthew Hudak said in a written statement. “Even with today’s technology, a Border Patrol agent on a horse remains an effective way to patrol remote areas of our border.”