U.S. Representative Troy Nehls (R-TX), a former Texas sheriff, says he stood with Capitol Police to defend the House Floor from aggressive protesters. Nehls responded with his training to assist in keeping demonstrators from breaking down the entrance.

Rep. Nehls, serving in his third day as a Congressman, heard the chaos and saw Capitol Police officers usher House Speaker Nancy Pelosi from the House Chamber, he told Breitbart News in an interview Wednesday evening. Suddenly he heard demonstrators attempting to storm through the House Floor entrance used by presidents during the State of the Union Address. 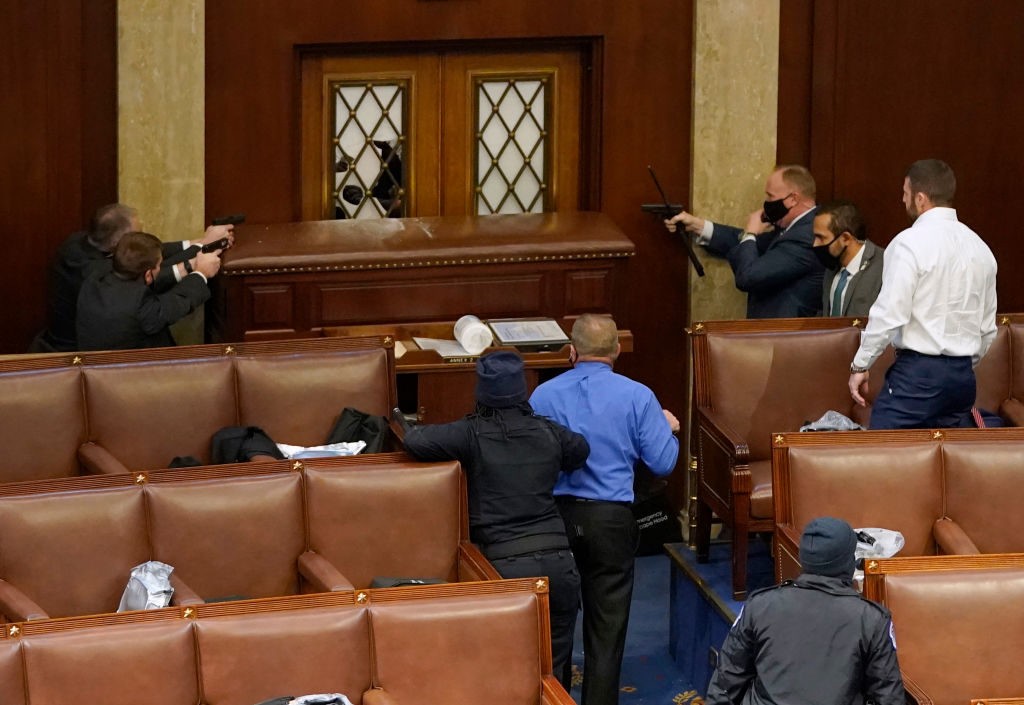 Photos by Getty Images photographer Drew Angerer show Nehls rushing toward the door with Capitol Police uniformed and plainclothes officers. Nehls (wearing a blue shirt in the middle of the photo) said he refused to leave as officers said, “Sir, you can’t be here.” Most of the other representatives left the floor.

“I’m here for you,” the former sheriff from Fort Bend County, Texas, continued. “It’s what I do.”

Suddenly, someone broke a hole through the door’s window and Nehls and officers can be seen ducking for cover.

Not carrying his sidearm, Nehls asked the officers is they had an extra asp (baton) for self-defense. They said no, so Nehls improvised by breaking off a table leg. 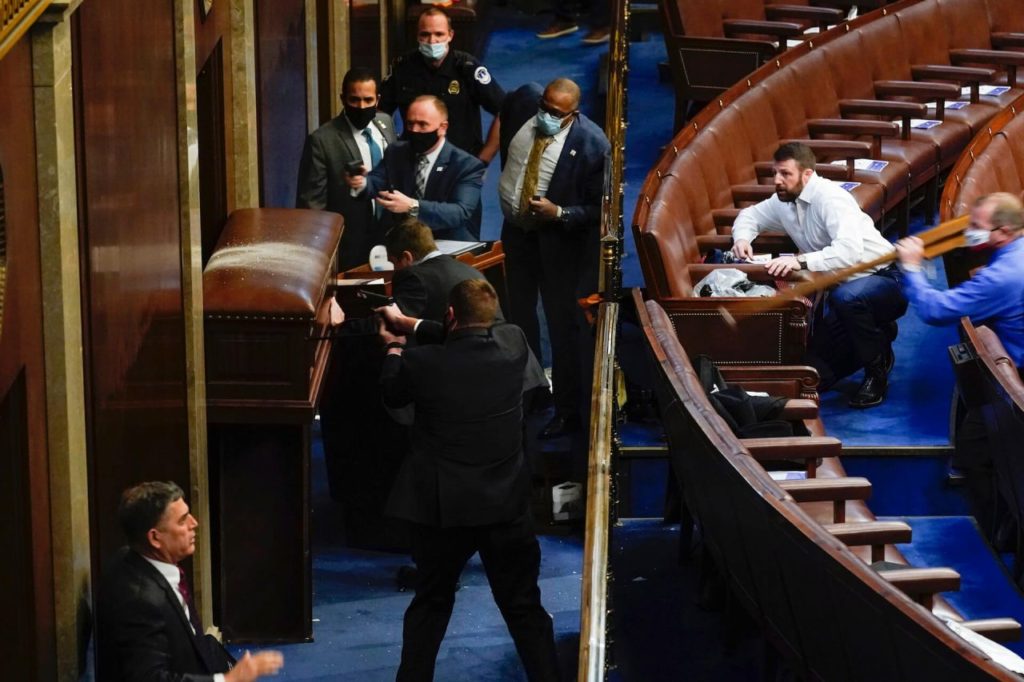 The officers stood poised with their handguns pointed at protesters.

Nehls said he began talking to the protesters and urged them to back down before the situation escalated further.

“I could not retreat,” Nehls told Breitbart. “I had to defend our sacred hall.”

Three other freshmen Texas Congressmen, Pat Fallon, Ronny Jackson, and Tony Gonzales, also gathered near the door to help fend off the possible intrusion into the House Chamber.

The Texas Congressman, in his third day as a Member of Congress, said he stayed with the cops until only he and one other Rep. remained.

“You have to leave now, sir,” the officers told him. Nehls said he reluctantly followed their directive.

“This was a very sad day for America,” Nehls concluded.

I was proud to stand shoulder to shoulder with Capitol police barricading entrance to our sacred House chamber, while trying to calm the situation talking to protestors.

What I’m witnessing is a disgrace. We’re better than this. Violence is NEVER the answer.

On Twitter, Nehls said, “I was proud to stand shoulder to shoulder with Capitol police barricading entrance to our sacred House chamber, while trying to calm the situation talking to protestors.”

“What I’m witnessing is a disgrace,” he wrote. “We’re better than this. Violence is NEVER the answer.”

Bob Price serves as associate editor and senior news contributor for the Breitbart Texas-Border team. He is an original member of the Breitbart Texas team. Price is a regular panelist on Fox 26 Houston’s Sunday-morning talk show, What’s Your Point? Follow him on Twitter @BobPriceBBTX, Parler @BobPrice, and Facebook.

Editor’s note: This article has been updated to include three additional representatives from Texas who participated in the defense of the chamber.