The Tucson Air Branch (AMO) received notification from the Joint Interagency Operations Center (JIOC) on May 28 regarding five hikers who needed assistance that would require a helicopter rescue. The JIOC reported that four hikers were lost in the Baboquivari Mountains near Tucson. The hikers reported they had no water and were dehydrated, according to information obtained from CBP officials.

AMO officials dispatched a UH-60 Black Hawk helicopter aircrew and three AMO EMTs to conduct the search and rescue operation. The EMTs joined the aircrew in case medical attention and or an airlift extraction were required.

The aircrew quickly located the missing hikers and lowered the EMTs to check out their medical condition. The AMO EMT agents determined they hikers did not need medical attention. Due to the heat and lack of water, they were unable to proceed on their hike. 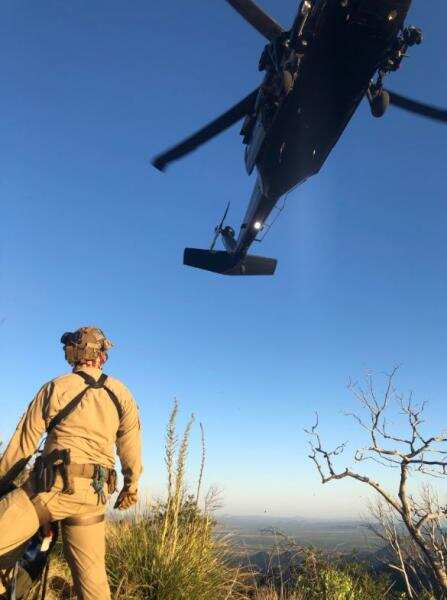 The agents and the aircrew executed a cable hoist extraction to lift the five hikers into the helicopter. Once all were onboard, the aircrew delivered the five lost hikers to awaiting ground-based Border Patrol EMTs who conducted a further evaluation and delivered the hikers back to their vehicles.

“Our agents are the best at what they do,” Tucson Air Branch Director Norman Montgomery said in a written statement. “The terrain in the Tucson area of operation can be very dangerous, especially as temperatures increase, and our air crews, and EMT’s are vital to carrying out our humanitarian, rescue and law enforcement missions.”

AMO officials reported the agency has rescued 79 people so far this fiscal year which began on October 1, 2019.