CBP officers assigned to the Presidio Port of Entry on Saturday observed a 2016 Nissan Sentra approaching in the Mexico-bound lanes. During an initial inspection, a K-9 trained to detect firearms and currency alerted near the rear of the vehicle, according to information obtained from El Paso Sector CBP officials. 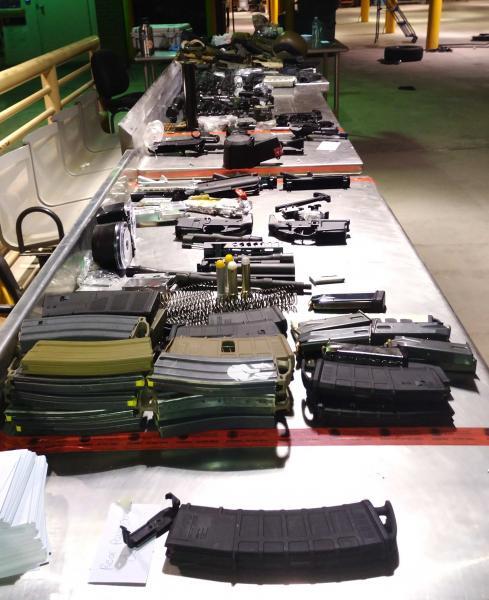 The officers directed the driver of the vehicle, a 44-year-old Mexican national, to the secondary inspection area where a non-intrusive X-ray uncovered several anomalies in the vehicle, officials stated. The officers conducted a physical search of the vehicle and found numerous rifle parts, ammunition and a host of related gear.

In addition to the rifle components, officers found nearly 400 rounds of ammunition, 40 magazines, and tactical gear in the vehicle’s quarter panels and other hiding places, the statement reports. During the search, officers also found what appeared to be a hand-grenade. They found the device wrapped in foil tape inside the driver-side quarter panel.

Fearing the grenade might be live, the officers took quick steps to clear the area to protect the public and other officers. Officials called in an explosive ordinance disposal technician to secure the device. The tech later determined the suspected grenade as a replica.

“I am proud of the El Paso Field Office CBP officers. Officers from the El Paso Field Office cover a geographic span of over 400 miles from Presidio, Texas to the Antelope Wells, New Mexico ports of entry,” CBP El Paso Director of Field Operations Hector Mancha said in a written statement. “They remain ever vigilant; in this instance, the Presidio team halted illegally transported weapons from entering Mexican communities and they arrested the subject who now faces prosecution.”

Officers arrested the Mexican man and seized the weapons cache and vehicle. They turned the case over to U.S. Immigration and Customs Enforcement Homeland Security Investigations special agents for further investigation.

Presidio Port Director Fred Hutterer added, “CBP officers at the port of Presidio are working hard to disrupt the criminal smuggling organizations’ activity.  This is another good example of our officers’ vigilance and attention to detail. Our ongoing southbound inspections have resulted in seizures of weapons, ammunition, tactical equipment, unreported currency, stolen property, and the apprehension of fugitives.”