Border Patrol Agent Chris Cabrera, in his role as a spokesman for the National Border Patrol Council (NBPC) and Local 3307 in the Rio Grande Valley Sector, expressed concern about the lack of information from headquarters.

“We are worried about our families and fellow agents,” Cabrera told Breitbart Texas in a phone interview this week. “Some of our agents are married to other agents, some to health care workers, and we are concerned we could bring the virus home to our children.”

Cabrera said he has heard about four to six agents have tested positive nationwide. “We are taking every precaution we can, but our job is very dangerous — especially during this pandemic,” he said.

Agent Cabrera said illegal immigrants have changed their behavior since new COVID-19 protection protocols were put in place. Those protocols call for nearly all apprehended to be put back across the border into Mexico regardless of age, nationality, or citizenship.

“We used to see them cross the border and surrender to the first agent they encountered,” the veteran Border Patrol agent said. “Now they are nearly all running away to try and escape. This means we have to chase them and have more physical contact than if they just surrendered.”

Laredo Sector Agent Hector Garza, in his role as Vice President of the NBPC, told Breitbart Texas on Wednesday that he believes his agents and the public have a right to know more information about who is sick and how they are coming in contact with the Coronavirus.

“U.S. Border Patrol should be seen as being transparent in providing this information to our agents and to the public,” Garza said. “We need this information so we can be confident in doing our job in securing the border and protecting American citizens from those who are entering from countries all around the globe.”

Garza said he believes management could utilize the options and discretion afforded to them in order to protect agents from possible exposure to those who are either infected or who may have come in contact with someone else who is infected.

“He will not allow employees that have been directly or indirectly exposed to suspected or confirmed COVID-19 cases to self-isolate, even when a doctor has ordered the employee to a mandatory quarantine,” he continued. “Instead, he allows them to continue working.”

Garza said Chief Chavez did not require K-9 Border Patrol Agents to self-isolate after potentially becoming exposed to the virus until after the exposed K-9 supervisor tested positive. This allowed for the potential exposure of the virus to hundreds of agents and members of the American public.

“It is important for the U.S. Border Patrol to know that the CDC Guidelines are a minimum requirement for Federal Agencies to follow,” Garza said in a written statement. “Laredo Sector Chief Patrol Agent Felix Chavez has the option and discretion to provide Border Patrol agent protections at a much higher level that will in-turn protect the American public and protect those that come into our custody.”

U.S. Customs and Border Protection officials initially announced that 160 employees tested positive for Coronavirus (COVID-19). That number increased to 218 by Sunday. The agency provided little other information about those infected.

Other than the number of employees by state, the agency provided no additional information about those infected. 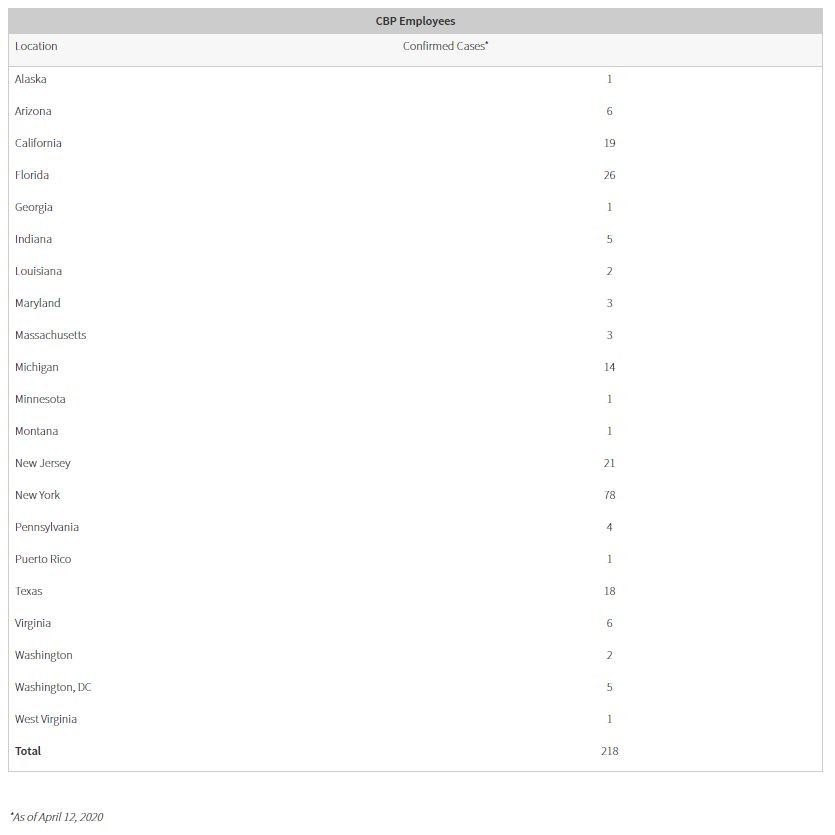 Breitbart Texas reached out to CBP officials requesting information about a breakdown of infected employees by organization unit (Border Patrol, Office of Field Operations, and Air and Marine Operations). Breitbart also asked if any employees contracted the virus in the line of duty and how many of those infected were commissioned law enforcement officers or staff.

CBP officials could or would not provide any additional information.

More than half of those reported to be infected were located in three states — New York, New Jersey, and Florida. CBP also reported double-digit infections in Texas, Michigan, and California.