Laredo Sector Border Patrol agents provided medical assistance to two migrants who were struck by a car as they attempted to circumvent an immigration checkpoint located about 75 miles from Mexico.

Agents from the Freer and Hebbronville Border Patrol stations received notification from Webb County Sheriff’s Office dispatchers that two men were hit by a truck near Bruni, Texas. The area where the accident occurred is a well-known location for human smugglers to move illegal immigrants around inland checkpoints, according to Laredo Sector Border Patrol officials. 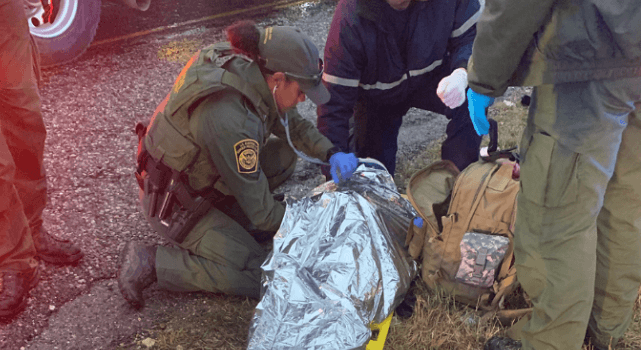 Laredo Sector Border Patrol agents provide medical assistance to an illegal alien who was struck by a truck while attempting to circumvent an immigration checkpoint. (Photo: U.S. Border Patrol/Laredo Sector)

When the agents arrived on the scene, they discovered two migrants who appeared to have sustained serious injuries after being struck by a truck on Farm to Market Road 2050, officials stated. The agents immediately began providing medical assistance until local paramedics could arrive at the remote location.

Agents reported one of the migrants sustained “broken extremities.” The second was unresponsive and agents suspected head trauma. An ambulance transported both to a Laredo, Texas, hospital. The agents assisted in the transportation of the migrant that sustained the broken bones.

Agents later identified the two men as Guatemalan nationals who entered the U.S. illegally. The agents said the two were walking along the road when a passing truck struck them.

Officials notified the Guatemalan Consulate of the injuries.“The quick action taken by our Border Patrol EMTs today, show that our agents are always ready to assist in life preservation situations by providing medical care to the individuals who were involved in this terrible accident this morning,” Laredo Sector Acting Assistant Chief Patrol Agent Jose Martinez said in a written statement.