A new report from the Center for Immigration Studies (CIS) reveals that the hyper-violent MS-13 transnational criminal gang has spread to 22 U.S. states. The gang accounted for 207 murders, mostly in California, Maryland, New York, and Virginia since 2012. The rapid growth is attributed in the report to the influx of Unaccompanied Alien Children from Central American countries like El Salvador, Honduras, and Guatemala. 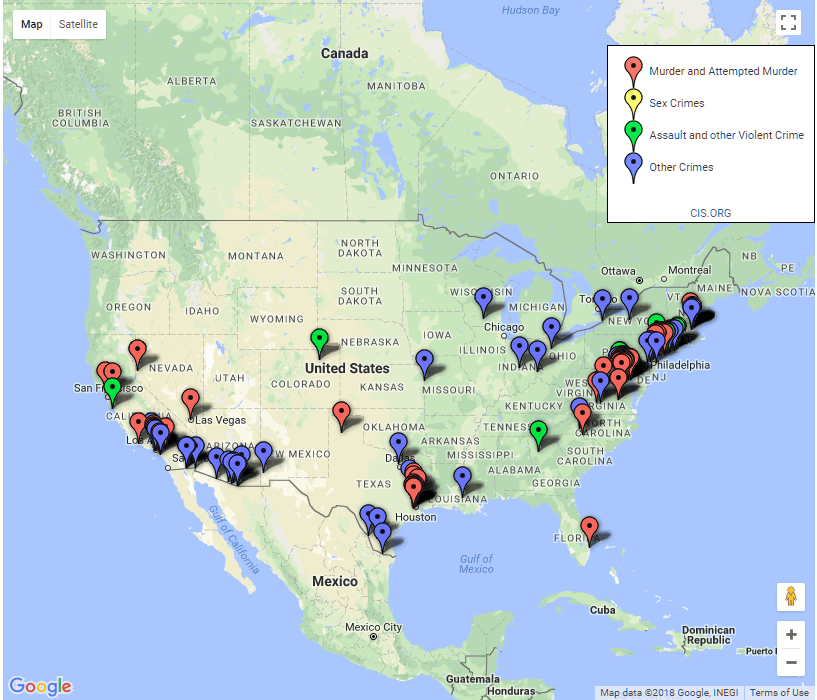 CIS Director of Policy Studies Jessica Vaughan researched MS-13 gang activity over the past six years and found the arrests of 506 MS-13 members who were charged with crimes in 22 states. Of those, 207 were murders and more than 100 cases were racketeering, drug trafficking, sex trafficking, attempted murder, sexual assaults, and extortion.

“The Trump administration has declared war on MS-13, the notoriously brutal gang based in El Salvador,” Vaughan stated in the report. “A similar initiative launched by the Bush administration in 2005 stifled the gang’s activity after several years, but the gang has been able to rebuild itself here since 2012.”

“All criminal gangs are a threat to public safety, but MS-13 is a unique problem because of the unusually brutal crimes its members have committed, its success in using intimidation to victimize and control people in its territory, and its focus on recruiting young members, often in schools,” she added.

Vaughan connected the resurgence of MS-13 gang membership and their associated crimes to the influx of Unaccompanied Alien Children (UAC) that began in 2014. She reported that the crimes committed by MS-13 are concentrated in the areas with large numbers of UACs who were resettled across the country by the federal government.

“Today, a smaller percentage of MS-13 members is believed to be here illegally. Some are U.S.-born, others have obtained green cards or have Temporary Protected Status; some have Deferred Action For Childhood Arrivals (DACA),” Vaughan wrote. “But when the gang leadership decided to launch a more concerted effort to enlarge in the United States, it was able to take advantage of the Obama administration’s catch-and-release policies for unaccompanied minors apprehended at the border to move in younger members from Central America.”

“At a recent roundtable of officials convened at the White House by President Trump on February 6, 2018, to discuss the MS-13 problem, Rep. Peter King (R-N.Y.) said that MS-13 members had committed 17 murders in an 18-month period, representing 38 percent of all homicides in his district,” the CIS policy studies director reported. “According to investigators, the number of MS-13-related murders in Montgomery County, Md., has gone from about one a year to seven in the last two years.”

The CIS report recommends the following actions be taken by Congress:

There are a number of steps Congress should take to assist federal and local law enforcement agencies in combating MS-13 and other transnational criminal organizations. Many of these provisions are found in the Secure America’s Future Act, introduced by a group of committee chairs in the U.S. House of Representatives.14

Bob Price serves as associate editor and senior political news contributor for Breitbart Texas. He is a founding member of the Breitbart Texas team. Follow him on Twitter @BobPriceBBTX, Gab, and Facebook.