Border Patrol agents say they are being forced into a catch-and-release situation again because immigration officials do not have room to house the increasing numbers of illegal aliens. The crossing figures have risen each of the past several months.

Border Patrol Agent Brandon Judd, in his capacity as president of the National Border Patrol Council, told the Washington Times that illegal immigration is surging again to the point where U.S. Immigration and Customs Enforcement (ICE) officials do not have the capacity for detentions.

“We’re going to have to release them out our front door,” Judd told the newspaper. “Even if we try to turn them over to them, they’re just not going to take them.”

Judd stated the San Antonio ICE office said they would refuse to take any Family Unit Aliens (FMUA) arrested by Border Patrol because they were at capacity. ICE also reportedly claimed to not have beds for non-family migrants.

“The moment we start releasing them out our front door, you’re going to see a huge increase take place in the numbers coming across,” Judd warned.

Breitbart Texas reached out to ICE and U.S. Customs and Border Protection (CBP) officials for comment on the matter. A response was not immediately available.

In September, Breitbart Texas reported the apprehension of illegal immigrants by Border Patrol agents increased for the fourth consecutive month. The figures in this article cover FY 2017 through the end of August — the last numbers available. Despite numerous requests, CBP has not released the year-end numbers for September 30. 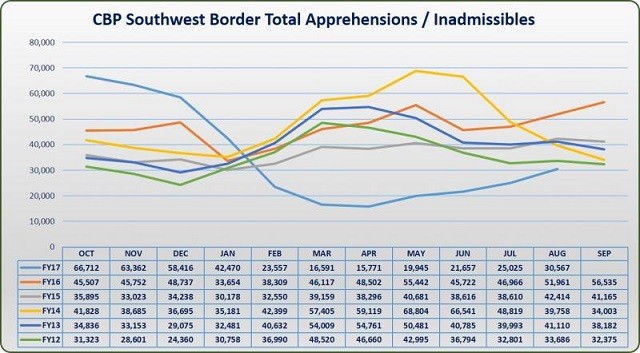 “It’s very concerning that we continue to experience such a sizeable influx of families and youths entering illegally,” Center for Immigration Studies (CIS) Director of Policy Studies Jessica Vaughan told Breitbart Texas on Thursday. “The smugglers know our immigration policies better than most Americans do, and clearly they see what is happening – that we’re still letting people walk in, be briefly detained, and released to live and work here indefinitely. It’s still perceived as a great deal and worth the smuggling fees and the risk of the journey.”

“The Trump administration has made important strides in restoring interior enforcement, and they are letting the Border Patrol do their job, but clearly more needs to be done. To really address this problem, the administration needs help from Congress,” she stated. “They need more facilities to hold people in custody in the border area, they need to resolve these cases quickly and send people home, and they need to find a way to do more within the constraints of the hostile lawfare and ideological judicial response that is also a real problem for DHS.”

“Congress can help with that too,” Vaughan explained. “The House has drafted and moved several bills to address the problem, but the Senate has taken up none of them. Instead, the priority for the Senate seems to be passing an amnesty for the Dreamers, and they appear willing to hold up the critical funds that would help DHS to get that amnesty. They appear willing to literally hold our border security hostage to this amnesty demand, which will only set off more illegal immigration like this.”

The reports from CBP indicate the Rio Grande Valley Sector (RGV) in South Texas continues to lead the other eight southwestern Border Patrol sectors in apprehensions, including Unaccompanied Alien Children (UAC) and FMUAs. Three Texas sectors (RGV, Laredo and El Paso) account for more than half of all southwest border apprehensions.

“This is especially a problem for Texas, which is bearing the brunt of this influx,” Vaughan stated. “It’s stressing the schools and health care systems, it’s costly for taxpayers, and it has created a major public safety problem because of the MS-13 and other gang members who are gaining entry as a result. There have been some horrific incidents around Houston in particular, where youths who were allowed to enter and released have committed some unspeakably brutal crimes.”

Bob Price serves as associate editor and senior political news contributor for Breitbart Texas. He is a founding member of the Breitbart Texas team. Follow him on Twitter @BobPriceBBTX, GAB, and Facebook.