China’s Foreign Ministry confirmed on Friday dictator Xi Jinping was planning a “meeting” with American President Joe Biden in the near future, building on reports of a potential “virtual” summit on Monday.

Xi and Biden have regularly engaged in phone calls and “virtual” communications since the Democrat took office in January. Prior to his ascent to the presidency, Biden engaged in extensive diplomacy with Xi as President Barack Obama’s second-in-command. Biden regularly boasts of his time with Xi, has stated he “admires” the Chinese leader, and has repeatedly claimed to know Xi better than any other non-Chinese leader.

Reports based on satellite images from within China revealed this week that Xi’s regime has built model U.S. Navy ships for the People’s Liberation Army (PLA) to use as target practice, indicating Xi is preparing for a war with America.

Foreign Ministry spokesman Wang Wenbin said during Friday’s regular press briefing at the ministry that the two country were “maintaining close communication” on the matter, according to China’s government propaganda newspaper the Global Times.

“Since the beginning of this year, President Xi has held two phone conversations with Biden at the US’ invitation, and the two leaders agreed to maintain regular communication through various ways,” the Global Times paraphrased Wang as saying. “Currently, China and the US are maintaining close communication on detailed arrangements for the top leaders’ meeting and we hope the U.S. will meet China halfway and jointly work with China to promote a successful meeting and push bilateral relations back on the right track.”

The Global Times acknowledged unverified reports of a “virtual meeting” between Xi and Biden on Monday but did not offer any more confirmation on the part of Beijing that such an event would occur.

While the Biden administration has done little to respond to evidence that the PLA is planning to go to war with the U.S. Navy, Biden officials celebrated the signing of a symbolic document on climate change with Beijing this week. 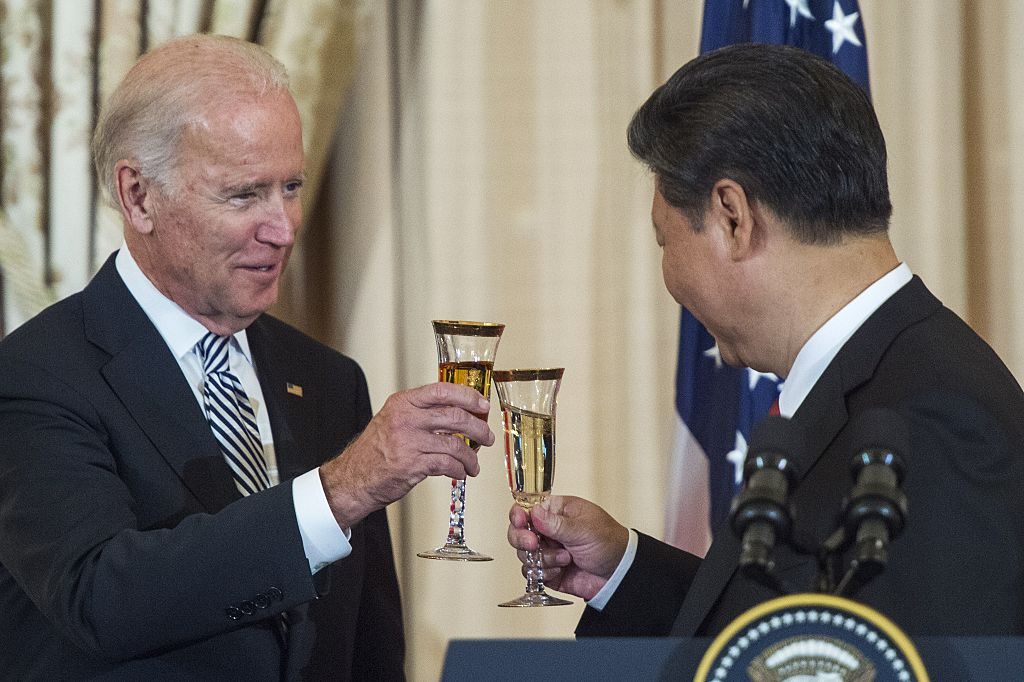 China and the Biden administration signed a “joint declaration” in recognition of the United Nations’ COP26 climate summit – which the Chinese Communist Party did not attend – that contains no actionable items on climate. Much of the text simply “recalls” the existence of previous agreements, many of which China is violating with record-setting coal use.

“The United States and China recall their Joint Statement Addressing the Climate Crisis of April 17th, 2021,” one provision of the declaration reads.

“Moving forward, the United States and China welcome the significant efforts being made around the world to address the climate crisis,” reads another, omitting any specificity on the “significant efforts” other than describing them as “enhanced climate actions” and “stepped-up efforts.” In one provision, both sides agree to “measure” and “research” methane emissions but not make any particular move to stop them.

Biden climate envoy John Kerry – who reportedly has financial ties to Uyghur slave labor – applauded China for “strong statements about the alarming science, the emissions gap and the urgent need to accelerate the actions to close that gap.”

Speaking to reporters on Thursday, Wang, the Foreign Ministry mouthpiece, Wang claimed the declaration “puts forward specific measures for China and the US to carry out their respective domestic actions, promote bilateral cooperation and advance multilateral processes.”

“This shows once again that China and the US can work together on major international issues,” Wang celebrated, “and accomplish many great things that benefit the people of both countries and the world through cooperation, and inject positive energy into the multilateral processes.”

John Kerry’s diplomatic efforts with China on climate change came up empty over the summer, prompting him to call for “direct diplomacy” between Joe Biden and Chinese communist party leader Xi Jinping. https://t.co/Vy55WgdPyW

Biden has expressed enthusiasm for Xi personally in repeated public appearances. Biden has repeatedly claimed that he traveled 17,000 miles with Xi Jinping, a declaration corporate media have deemed false.

In February, Biden appeared to defend Xi’s genocide against the Uyghur people.

“If you know anything about Chinese history, it has always been the time China has been victimized by the outer world is when they haven’t been unified at home,” Biden told CNN’s Anderson Cooper when asked about the Uyghur genocide. “It’s vastly overstated, but the center of principle of Xi Jinping is that there must be a united, tightly controlled China. And he uses his rationale for the things he does based on that.”

“I’ve known Xi Jinping for a long time. Allegedly, by the time I left [the] office of the vice president, I had spent more time with Xi Jinping than any other world leader,” Biden said a month later. “[What] I admire about dealing with Xi is he understands and makes no pretense about not understanding what I’m saying, anymore than I do him.”