“Tripura Police have taken up a case against a total of 102 Twitter accounts under [India’s] Unlawful Activities Prevention Act (UAPA) for spreading fake and distorted information related to the recent violence that took place at Panisagar North Tripura,” Jyotishman Das Choudhary, a spokesman for the Tripura State Police, told ANI on November 6.

“The case which was earlier investigated by police is now transferred to the Crime Branch division of Tripura police. The police have been trying to trace the handlers of the accounts,” he added.

Tripura is surrounded by Bangladesh, a Muslim-majority country, on three sides. Anti-Hindu mob violence began in Bangladesh around October 15 after images circulated on social media allegedly depicting the desecration of Islam’s holy book, the Quran, at a recent Hindu festival celebration in Cumilla, an eastern Bangladeshi city. Cumilla is located just three miles from India’s Tripura state. Bangladesh’s week-long wave of anti-Hindu mob violence saw Muslims attack and burn Hindu temples as well as dozens of homes, farms, shops, and automobiles associated with Hindu minorities. The mobs killed at least eight people and forced the Bangladeshi government to deploy special paramilitary units to over 35 districts in a bid to quell the rioters. 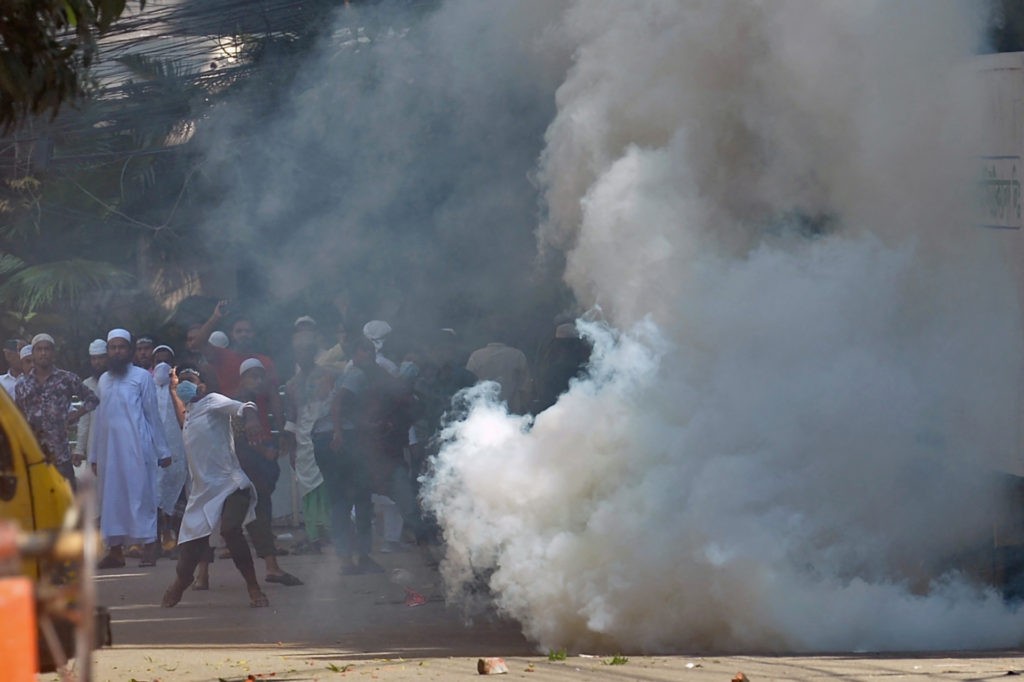 Protesters pelt stones towards police amid tear gas during a demonstration after the Friday prayers near a mosque in Dhaka on October 15, 2021, as protests began on October 13 after footage emerged of a Koran being placed on the knee of a figure of a Hindu god during celebrations for the Hindu festival of Durga Puja. (Photo by MUNIR UZ ZAMAN/AFP via Getty Images)

The interreligious tension subsequently spilled onto the Tripura side of the border. Hindu advocates in the state staged protests to denounce Bangladesh’s anti-Hindu violence from about October 21 to October 26. The rallies were led by Vishva Hindu Parishad (VHP), a right-wing Hindu organization in India, and led to some mob violence against Muslim-affiliated sites in Tripura over the course of the week.

Tripura State Police said certain social media users used the pro-Hindu rallies to instigate further anti-Muslim mob violence in Tripura in the aftermath of the protests. The alleged perpetrators reportedly posted fake depictions of the state, falsely implying that it was under siege by Hindu radicals.

“The accounts identified were spreading rumors, fake news, fake videos and fake photographs that were not even linked to Tripura,” a senior police officer in the state told Agence France Presse (AFP) on November 7. The police officer spoke to the news agency on condition of anonymity.

“It is still too early, but everyone will be identified and arrested for such fabrications,” he said.

Tripura State Police released a report to Indian media on November 6 identifying 102 social media posts it said were “published by ‘unknown miscreants’ to provoke conflict between ‘people of differing religious communities,'” according to AFP.

Most of the social media posts in question had been removed by November 6, according to AFP, which added that it “could not determine their content.”