Several United Nations agencies announced on Thursday that they had begun a nationwide humanitarian aid distribution campaign in Afghanistan, about a month after U.N. Secretary-General Antonio Guterres said the organization was working in the country “with the cooperation of the Taliban.”

The World Food Program (WFP) and the Office of the High Commissioner on Refugees (UNHCR) both began distributing money and food aid, as well as winter supplies, in Afghanistan this week. Both typically begin operations at the end of the year to help Afghans prepare for the frigid winter, which brings with it heightened threats of starvation and death by hypothermia for Afghanistan’s poor and displaced.

A third U.N. agency, the International Organization for Migration (IOM), issued a warning on Thursday that malnutrition in the country had “reached dramatic levels” and humanitarian crisis may soon become unavoidable.

The Taliban became the de facto ruling government of Afghanistan on August 15 after beginning a campaign of conquest in spring 2021 that resulted in rapid, bloodless gains throughout much of the country. The Taliban, a Sunni jihadist organization, ran the country through the 1990s until the United States invaded in 2001. The group had agreed to a peace deal with Washington last year but returned to all-out war following President Joe Biden’s decision not to respect the deal.

Since then, reports have indicated that U.N. aid workers in the country have faced the wrath of Taliban jihadis, but the U.N. leadership has insisted on collaborating with senior Taliban leaders.

“A plane carrying winter relief from the U.N. Refugee Agency’s global stockpiles in Dubai is landing this afternoon in Kabul, Afghanistan,” Shabia Mantoo a spokesperson for the UNHCR, announced Tuesday. “Humanitarian needs are rising rapidly in Afghanistan ahead of winter, when temperatures can dip to -25⁰C (5ºF).”

“Conflict and insecurity have displaced 3.5 million Afghans inside the country, including some 700,000 forced from their homes so far this year,” Mantoo continued, without specifying that the Taliban, which now controlled the country, was largely responsible for that conflict and insecurity. “UNHCR is rushing to provide winter assistance to some 500,000 displaced Afghans, returnees and local host communities by the end of 2021.”

Mantoo concluded by urging the international community to fund the United Nations’ efforts.

The WFP, a Nobel Peace Prize-winning agency, announced Thursday it would begin distributing $33 a month, or 3,500 Afghanis, to more than 4,000 impoverished families in the country for the next four months.

“There are many people, having nothing to eat and wear, and they have nothing to make their houses warm,” the agency’s Kabul representative Sami Alokozai reportedly said.

The WFP expects the aid to make a difference for the thousands, if not millions, of Afghans struggling to find reliable sources of food since the Taliban took over the country. Many families were displaced by violence between the Taliban and the former Afghan government, and Kabul’s notoriously corrupt government did little to aid them. Taliban leaders have claimed the situation has only worsened since they came to power because international organizations such as the International Monetary Fund (IMF) and World Bank refuse to grant a terrorist organization access to Afghan government funding.

The IOM, another U.N. organization, warned Thursday that famine could soon hit the country.

“More than half the population is struggling to eat, malnutrition is reaching dramatic levels, especially for many children, and over 80 per cent of the people we have surveyed say they have lost their jobs and livelihoods,” IOM leader António Vitorino said. “Millions are living in inadequate shelters with limited access to basic services, including sanitation and health care.” 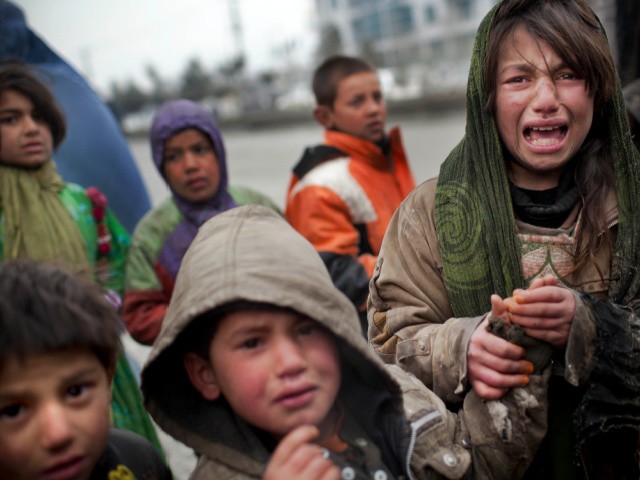 An Afghan refugee girl reacts after another child stole her food voucher while she was queuing in front of a truck organized by the World Food Program in Kabul (AP Photo/Anja Niedringhaus).

“We are going door-to-door to see what is needed and are providing shelter, blankets, warm clothing, and cash for fuel and heating,” he said. “We are planning to expand winterization assistance to every province in the country to reach 200,000 people in need.”

Neither the WFP, the IOM, nor the UNHCR mentioned how they had attained access to destitute Afghans, nor have any reports surfaced since the operation began of attacks on U.N. workers at press time – indicating that the Taliban had not interfered to prevent operations or objected to the distribution of aid.

In October, Secretary-General Guterres had stated that the agency was working with the Taliban and urged the world to do the same.

“We have been acting with the cooperation of the Taliban, who have progressively granted access to the areas requested and provided security when needed,” Guterres confirmed.

Guterres argued that “injecting Injecting liquidity into the Afghan economy can be done without violating international laws or compromising principles” in his encouragement to the international community to invest in the country.

“Afghanistan is confronting an epic humanitarian crisis and is on the verge of a development catastrophe. … We can only achieve more stability with a united approach,” he said. “Together, let us act with determination – and without delay – to help the people of Afghanistan and to secure a better future for all.”

Guterres has repeatedly suggested that cooperation with the Taliban is necessary to assure stability in the country.

“We must maintain a dialogue with the Taliban, where we affirm our principles directly,” Guterres said in September, “a dialogue with a feeling of solidarity with the Afghan people.”

The Taliban, on its end, has actively courted United Nations support. Spokesman Suhail Shaheen revealed shortly after the Taliban took over the country in August that WFP Executive Director David Beasley had met with senior Taliban officials to discuss “humanitarian issues,” including not just preventing famine but addressing the ongoing Chinese coronavirus pandemic. Taliban officials have not implemented a coordinated government strategy to deal with the pandemic but have expressed interest in purchasing vaccine products from friendly nations such as Russia and China.

Shaheen said in August that Taliban officials had “assured the executive director of WFP of its cooperation and security and appreciated their humanitarian assistance.”

“So far they [the Taliban] have calibrated, cooperated and given us the access we need,” Beasley said in an interview at the time. “I hope it continues … and I expect it to continue.” 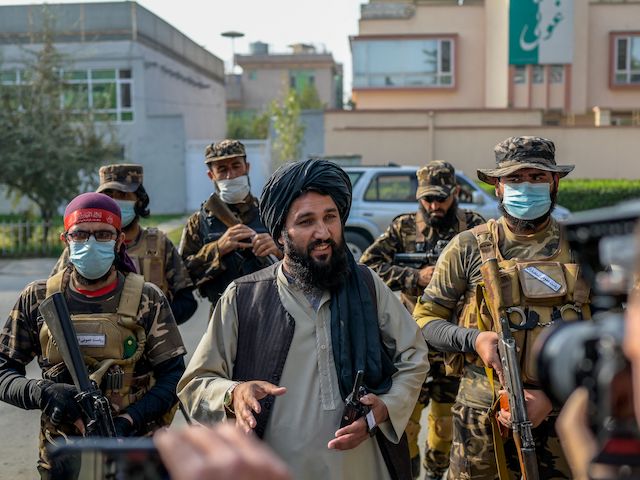 A Taliban commander (C) speaks to the members of the media in Kabul on September 30, 2021 (Bulent Kilic/AFP via Getty Images).

U.N. Under-Secretary-General for Humanitarian Affairs Martin Griffiths met Taliban officials in September and similarly presented a positive response to the terrorists’ disposition to the U.N.

A Reuters report published in August suggested that the Taliban’s public attitude towards the United Nations differed from actions on the ground. The report claimed that journalists at the news agency had obtained internal documents from the United Nations detailing attacks on U.N. personnel in the country. Taliban jihadists, the U.N. apparently had reason to know, had begun engaging in gang beatings of Afghans who worked for the global institution.