Amnesty International (AI) announced on Monday it will close its office in Hong Kong by the end of the year.

This decision, made with a heavy heart, has been driven by Hong Kong’s national security law, which has made it effectively impossible for human rights organizations in Hong Kong to work freely and without fear of serious reprisals from the government…

Hong Kong has long been an ideal regional base for international civil society organizations, but the recent targeting of local human rights and trade union groups signals an intensification of the authorities’ campaign to rid the city of all dissenting voices. It is increasingly difficult for us to keep operating in such an unstable environment.

“The pattern of raids, arrests and prosecutions against perceived opponents has highlighted how the vagueness of the law can be manipulated to build a case against whomsoever the authorities choose,” she noted. 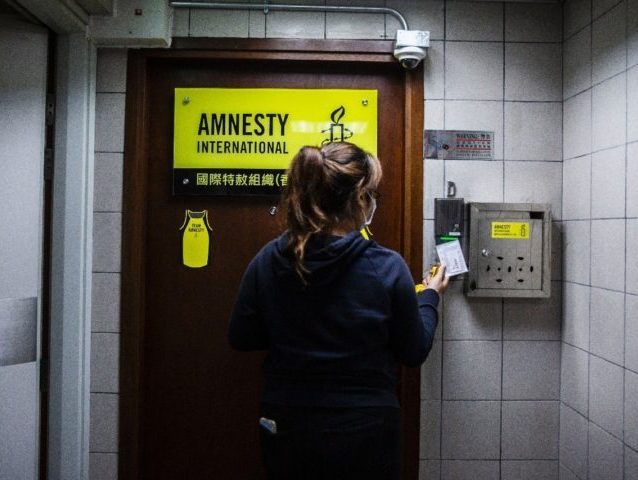 A woman is seen at the entrance to Amnesty International offices in Hong Kong in October 2021, as the Human Rights organisation announces it will be closing its offices by the end of 2021 citing Beijing’s enacted national security law as a reason. (Isaac Lawrence/AFP via Getty Images)

AI General Secretary Angles Callamard promised her organization would “continue to stand with the people of Hong Kong” during the “difficult days ahead.” AI said it would move its Hong Kong operations to other Asia-Pacific regional offices.

The Chinese government illegally imposed Hong Kong’s national security law in June 2020 by, bypassing Hong Kong’s legislature and violating the guarantee of autonomy given by Beijing when it took control of the island from the United Kingdom in 1997. 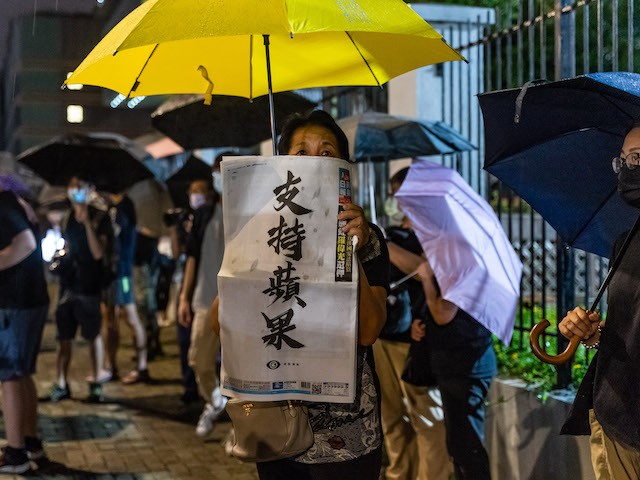 A supporter holds up a copy of the Apple Daily newspaper outside of their offices on June 23, 2021 in Hong Kong, China. (Anthony Kwan/Getty Images)

On Monday, a Hong Kong court convicted activist Ma Chun-man merely because he shouted some provocative slogans at rallies to test the limits of free speech. Ma’s sentencing on November 11 will make it clear exactly what those limits are.

“The government is trying to use the NSL (National Security Law) to stamp out certain forms of speech. This is a core function of the government’s use of the NSL over the past 15 months,” observed Thomas E. Kellogg of Georgetown University’s Center for Asian Law. “As the case against Ma shows, prosecutors continue to bring serious charges against people who say things that the government doesn’t like.”

Of particular concern to groups like Amnesty International, the NSL criminalizes “collusion with foreign powers,” which has proven to include speech that supports international sanctions against the Communist Party for its human rights abuses. Virtually everything a human rights organization says could be deemed “collusion” and punished at the whim of Hong Kong officials. 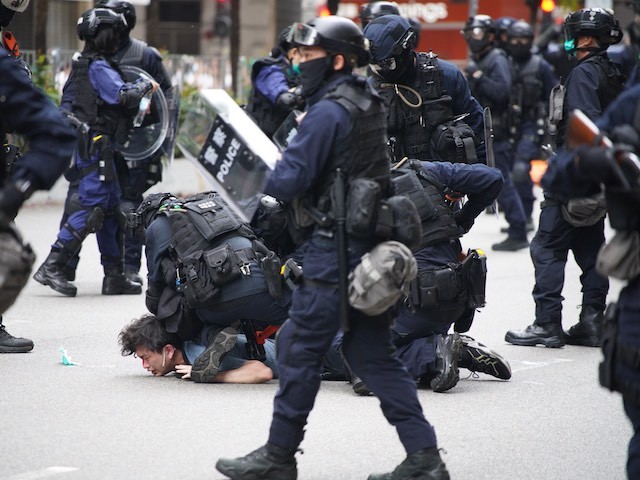 Police special tactical squad detain a protester (C) in Wanchai, Hong Kong on May 24, 2020, as thousands of demonstrators took to the streets to protest against a national security law. (Yan Zhao/AFP via Getty Images)

The BBC on Monday noted that several other human rights non-governmental organizations (NGO), such as the New School for Democracy, previously shut down their Hong Kong operations or relocated to safer venues due to apprehension about the NSL.

“The noose seems to be tightening a bit closer on civil society overall and therefore it behoved us to make a move before we ended up with someone in prison,” AI deputy secretary-general Kyle Ward told the South China Morning Post (SCMP) on Monday.

Ward specifically pointed to a decision last month by Hong Kong’s financial services minister that would strip charities deemed a “threat to national security” of their tax-exempt status. He added that some of AI’s Hong Kong personnel worried about being arrested under the NSL.