The Cuban Communist Party joined the official “Energy Alliance” of the Belt and Road Initiative (BRI) this week – an extension of the Chinese global infrastructure program focused on developing energy infrastructure globally.

Cuban Energy and Mining Minister Livan Arronte Cruz announced the new collaboration with China on Monday, claiming the focus of Cuba’s participation in the program would be on advanced renewable energies. Cuban ambassador to China, Carlos Miguel Pereira, said Havana and Beijing shared the goal of “amplifying and diversifying energy cooperation and collectively overcoming challenges [of] global energy development.”

Cuba, once the most developed and wealthiest country in Latin America, is now among the poorest due to 60 years of communist rule. Under the currently ruling Castro dynasty, Cubans regularly endure energy blackouts prompted by communist mismanagement and poor upkeep of power plants and other key infrastructure. Blackouts have intensified in recent months to the point that Unión Eléctrica, the state energy company, notifies residents of upcoming blackouts on a daily basis. 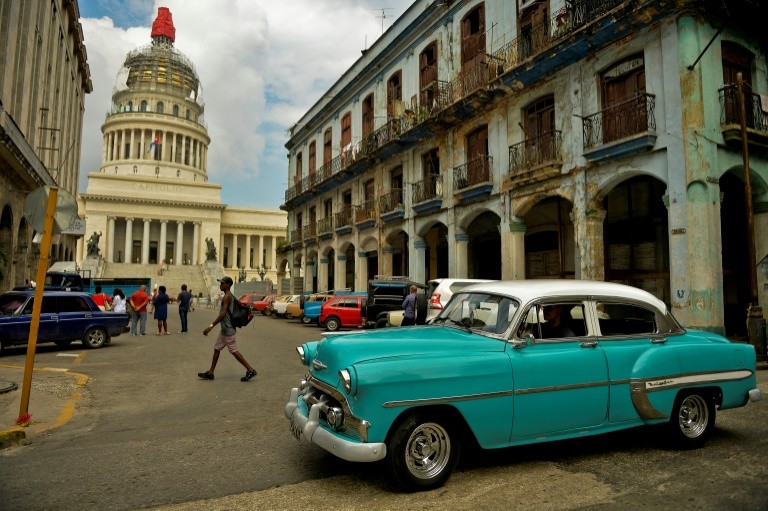 Increased blackouts, food shortages, and incidents of police brutality, among other issues, prompted nationwide protests against communism in Cuba in July. At the time, the Chinese government expressed support for the island’s Communist Party and offered to aid it in preventing the uprising from threatening the Castro regime. Perhaps in the hope of preventing larger protests in the future, Cuban officials made clear this week that they are inviting Chinese corporations to do business in the country.

The BRI is a global infrastructure initiative China launched in 2013. The Communist Party asserts that the goal of the initiative is to help developing countries advance economically by offering loans to be used on port, rail, and road projects, among others, that will make them more accessible to international trade. In reality, China has used the project to prey on underdeveloped nations with high-interest loans, moving to seize the infrastructure projects when the countries cannot pay. In addition to indebting the participating countries to the Communist Party, locals in BRI countries have reported an influx of Party-friendly Chinese businesspeople who have engaged in abusive, racist, and criminal behavior against locals, particularly black Africans.

Cuban “President” Miguel Díaz-Canel, the frontman for the Castro dynasty, announced Havana would join the BRI during a visit to Beijing in 2018.

Cuban officials boasted on Monday that joining the Energy Alliance of the BRI would make the island nation among the first Latin American countries in the coalition. Ambassador Pereira attended a ministerial conference for BRI nations on energy this week in China to formalize Cuba’s inclusion in the project.

The official newspaper of the Communist Party of Cuba, Granma, reported that Pereira “invited Chinese and other [BRI] member nations’ corporations and institutions to work in sectors like the development of green energy and inclusive access to energy services” in Cuba. Granma did not specify what kind of green energy the Party would like to see developed on the island.

Prior to this week, Cuba’s participation in the BRI had focused on transportation. China began building a railway connecting the nation’s two largest cities, Havana and Santiago de Cuba, that required Cuba to purchase 80 rail cars in 2019 and another 80 a year through 2021. As Cuba cannot afford the purchase, it paid for the cars via a Chinese loan. No evidence suggests that the railway will be profitable.

The railway was part of a deal Díaz-Canel brokered in person during meetings with Chinese dictator Xi Jinping in 2018. During his visit to Beijing – a stop on a greater tour that included a stop in Pyongyang, North Korea – Díaz-Canel agreed to deals in “new energy, information communication, and biological pharmacy,” as well. The Castro figurehead asserted that Cuba was “willing to learn from China to update its domestic economic and social model and promote the cause of socialist construction.”

A report published in August revealed that at least two Chinese technology companies, Huawei and ZTE, had extended their operations in Cuba to such an extent that the regime used their products to shut down the internet following the July 11 protests, a move designed to block Cubans from organizing more rallies against communism and from sharing images of police brutality against protesters. According to a report by The Diplomat, an Asian news and editorial site, Havana would not have been able to silence Cubans as efficiently as it did without Chinese aid.

“Chinese companies have played a key part in building Cuba’s telecommunications infrastructure, a system the regime uses to control its people, just as the Chinese Communist Party (CCP) does within its own borders,” the outlet reported. “The primary technology providers for Etecsa, Cuba’s sole internet access company, are all Chinese: Huawei, TP-Link, and ZTE.”