Singapore, which has a Chinese coronavirus vaccination rate of 82 percent, recorded its highest single-day increase in new locally transmitted cases of the virus Tuesday with 3,994 infections.

Singapore’s government tightened restrictions on in-person dining and social gatherings in the metropolis on September 27 as part of a stated effort to help reduce transmission of the Chinese coronavirus. In the three weeks since then, the city-state’s coronavirus caseload has mushroomed.

“Singapore reported 1,647 new COVID-19 [Chinese coronavirus] cases on September 27, the day measures were tightened. By the next day, new cases topped 2,000 for the first time, and have not fallen below since,” CNA reported on October 19.

“A week later, on October 5, the country reported more than 3,000 cases,” the Singapore-based news agency recalled.

The republic’s coronavirus death rate has likewise increased over the past three weeks. Singapore’s Ministry of Health (MOH) reported two deaths from the Chinese coronavirus on September 27. The city-state’s coronavirus death tally “varied in the following days, ranging from two to nine. It crossed into double digits on October 9, with Singapore reporting 11 deaths that day,” CNA recalled on Tuesday. 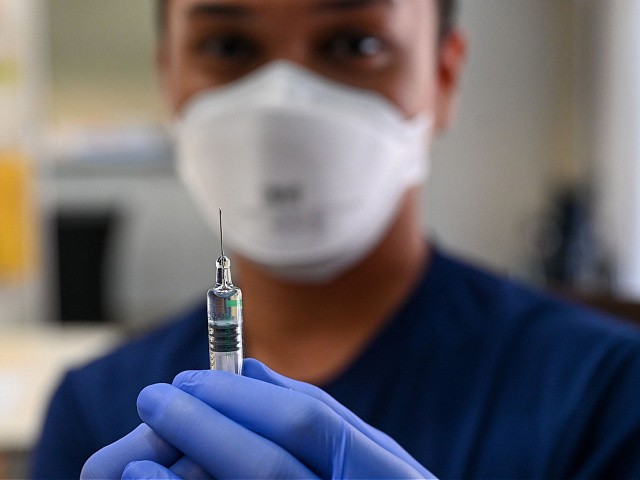 A nurse prepares a dose of the Sinopharm Covid-19 coronavirus vaccine at the Mount Elizabeth hospital vaccine centre in Singapore on September 7, 2021. (Photo by ROSLAN RAHMAN/AFP via Getty Images)

“The highest number of deaths reported in a day was on October 14, with 15 fatalities,” according to the news agency.

“From September 27 to October 18, Singapore reported 161 COVID-19 [Chinese coronavirus] fatalities – a spike from the 23 deaths in the same period prior,” CNA observed.

The number of severely ill Chinese coronavirus patients admitted to Singapore hospitals since late September has also increased. There were 27 Chinese coronavirus cases in Intensive Care Units (ICUs) across all of Singapore on September 27. This figure “breached the 30-mark and remained in the thirties in the days after, before hitting 40 on October 7,” according to CNA. “The number of cases in ICU has not fallen below that since then.”

“A total of 9,662,027 doses have been administered in Singapore under the national vaccination programme as at Oct 18 [sic],” the Straits Times reported on October 20.

“Both first and second doses of the Pfizer-BioNTech/Comirnaty and Moderna vaccines are currently being administered,” according to the Singapore-based newspaper.

“In addition, 227,800 doses of other vaccines recognised in the World Health Organization’s Emergency Use Listing, which includes Sinovac-Coronavac, Sinopharm and AstraZeneca, have been administered as at Oct 18, covering 118,598 individuals [sic],” the publication noted.

The Straits Times on Wednesday published a list of 133 state-run vaccination centers and clinics in Singapore offering Chinese coronavirus vaccines as of September 16. Just 11 of the listed sites administered Moderna vaccines while the rest offered Pfizer’s vaccine. None of the locations offered Sinovac. 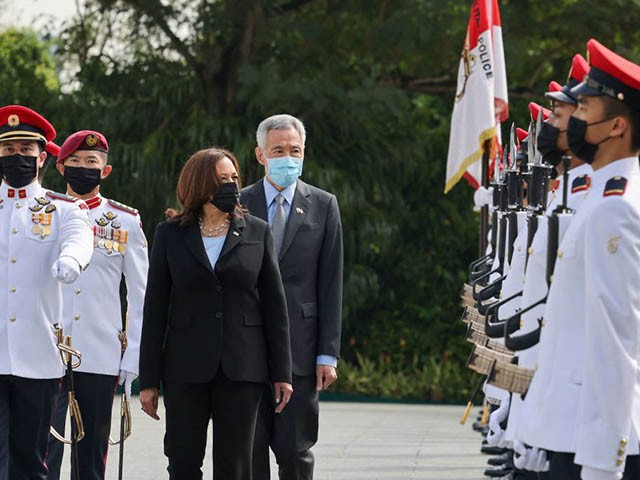 “It works by using killed viral particles to expose the body’s immune system to the virus without risking a serious disease response,” according to the BBC.

Pfizer-BioNTech said Comirnaty had an efficacy rate of 91 percent in April, though “experts continue to learn about Pfizer’s efficacy both in the laboratory and in the real world,” Yale Medicine noted on October 15.

“[A] study [published on July 28], not yet peer-reviewed, provided more new data that brought the efficacy number down to 84 percent after 6 months, although efficacy against severe disease was 97 percent,” the medical news site reported of Comirnaty.

“In August, the [U.S.] CDC [Centers for Disease Control and Prevention] also published studies that showed mRNA vaccine protection against infection may be waning, although the vaccines were still highly effective against hospitalization,” Yale Medicine added. “In one CDC study, data from the state of New York showed vaccine effectiveness dropping from 91.8 to 75 percent against infection.”

Sinovac’s CoronaVac has an efficacy rate of just 51 percent, though this did not prevent the World Health Organization (W.H.O.) from granting the vaccine emergency use approval in June.