Muslim mob attacks across Bangladesh have killed at least six people, including four Hindus, after sparking last Friday in response to an image posted to social media allegedly depicting the desecration of Islam’s holy book, the Quran, during a recent Hindu festival, the Press Trust of India (PTI) reported Tuesday.

Hundreds of Muslims in Bangladesh participated in violent protests starting on October 15 after video footage began circulating online that allegedly showed a copy of the Quran being placed at the feet of a Hindu statue. The unverified footage was allegedly filmed during celebrations for an annual Hindu festival known as Durga Puja in Bangladesh’s eastern district of Cumilla sometime last week, as the holiday’s main days lasted from October 11 through October 15 this year.

The allegedly blasphemous video footage outraged hundreds of Muslims in Bangladesh, who took to the streets — first in Cumilla and then across a dozen other districts — seeking revenge on the country’s minority Hindus. Islam is the state religion of Bangladesh, where 90 percent of the country’s population of over 170 million are Muslim. Less than nine percent of people in Bangladesh are Hindu. 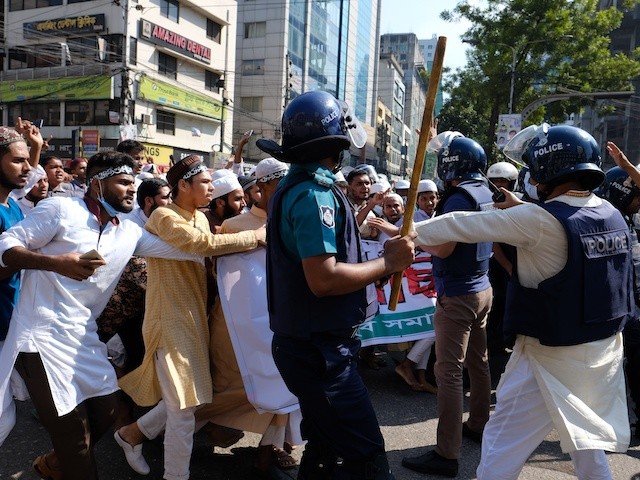 Police clash with Muslim devotees during a protest over an alleged insult to Islam outside the country’s main Baitul Mukarram Mosque in Dhaka, Bangladesh, October 15, 2021. (AP Photo/Mahmud Hossain Opu, File)

In mob violence that continued through October 17, Muslims vandalized homes, temples, shops, and automobiles owned or run by Hindus across Cumilla, Chandpur, Chattogram, Cox’s Bazar, Bandarban, Moulvibazar, Gazipur, Chapainawabganj, Feni, and other districts, according to PTI.

Police said more than 200 attackers beat and stabbed to death an executive member of the temple committee in the southern town of Begumganj where members of the Hindu community were preparing to perform the last rites of the 10-day Durga Puja festival.

The news outlet indicated that the murder took place on October 15, the final day of Durga Puja.

“On Saturday morning [October 16], another Hindu man’s body was found near a pond next to the temple, district police chief Shahidul Islam told AFP [Agence France-Presse] news agency,” according to Al Jazeera.

While Al Jazeera and other news outlets have reported that just two Hindus died in mob violence since October 15, PTI on October 19 revealed that at least twice as many Hindus have been killed by Muslims in Bangladesh over the past week.

“The Bangladesh Hindu-Buddhist-Christian Unity Council said at least 70 puja pavilions and temples were attacked in the previous three days of violence,” India’s largest news agency reported Tuesday. “The council alleges that at least four Hindu devotees have died in the attacks in Chandpur and Noakhali.”

A Muslim mob of more than 100 people “damaged 66 houses and set on fire at least 20 homes of Hindus” in a village of Rangpur district’s Pirganj Upazila on the night of October 17, the Bangladeshi news site bdnews24.com reported on October 19.

The local fire department said its initial report from the scene indicated that “29 residential homes, two kitchens, two barns and 20 haystacks belonging to 15 different owners were torched in Pirganj” on Sunday night. 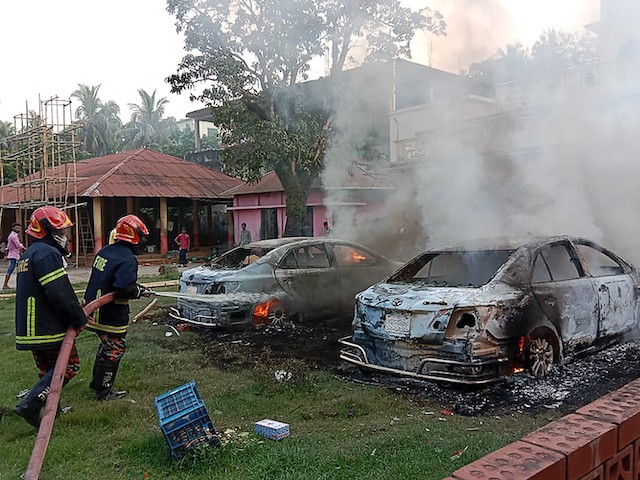 In this photograph, on October 15, 2021, firefighters work to extinguish cars set alight by a mob in Bangladesh’s southern district of Noakhali. (AFP via Getty Images)

In the Feni district on October 16, state authorities “deployed additional police forces and the paramilitary force Border Guard Bangladesh (BGB) after several temples and businesses owned by Hindus were vandalized and robbed during clashes,” PTI reported.

Bangladesh’s government has also been forced to deploy a special anti-crime force known as the Rapid Action Battalion (RAB) to support local police as they attempt to quell the mob violence in other districts. Bangladesh police have arrested approximately 450 people nationwide for their involvement in mob-related violence since October 15, Reuters reported Tuesday.