Members of the Hong Kong Confederation of Trade Unions (HKCTU) voted to break up on October 3, the group announced at a press conference held later that same day. The union “refused to say where the ‘political pressure’ it cited had come from, saying this was already clear enough to people and didn’t need to be stated,” according to RTHK.

“We all feel that it is politically uncertain to continue to run the Hong Kong Confederation of Trade Unions. We have no further elaboration on that. But in the meeting, all our affiliates understood the situation and made the hard decision,” HKCTU vice-chairman Leo Tang told reporters on Sunday.

Wen Wei Po, a Chinese state-owned newspaper in Hong Kong, published an article in September alleging HKCTU’s parent organization, the International Trade Union Confederation (ITUC), “was a political organization under the guise of a transnational union.” The newspaper suggested HKCTU may have acted as a “foreign agent” or “colluded with foreign forces,” both of which are criminal offenses under Hong Kong’s National Security Law.

Denying the accusations, HKCTU chairperson Joe Wong told the Hong Kong Free Press on September 20 his trade union had “worked on some projects with the Solidarity Centre, an organization under the American Federation of Labor and Congress of Industrial Organizations.”

Wong said the projects “concerned the promotion of labor rights and collective bargaining and did not involve any political activities.”

“The HKCTU had stopped working with the center before July last year, when the security law came into force,” he added. 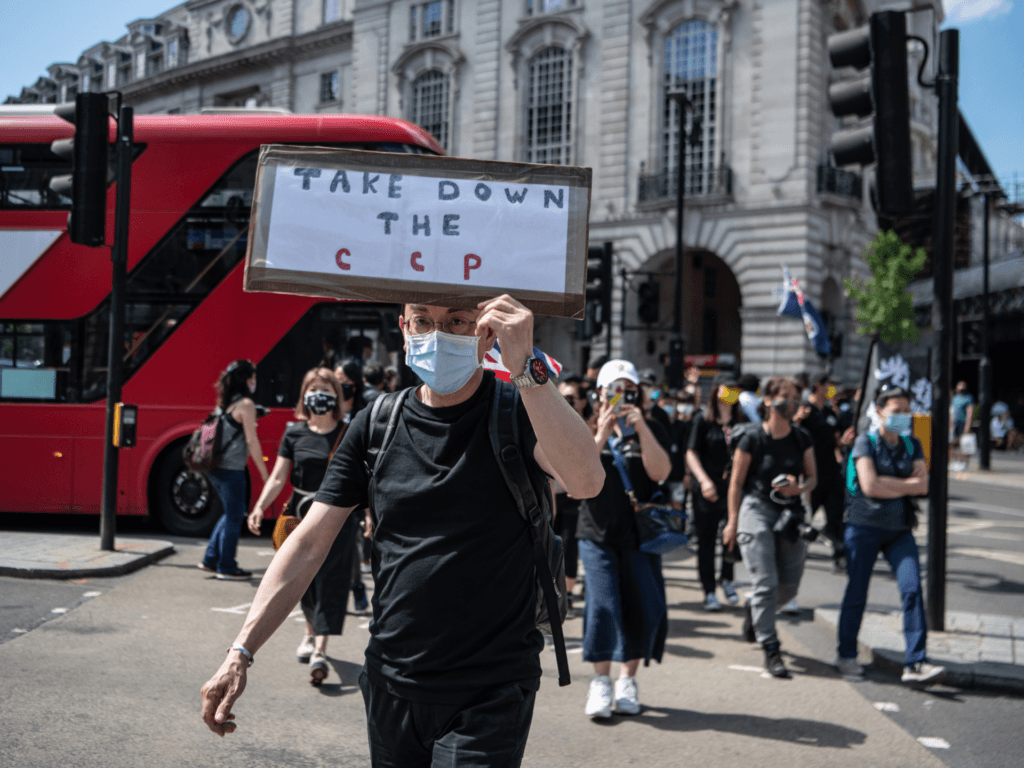 Protesters attend a rally for democracy in Hong Kong on June 12, 2021, in London, England. The rally marked two years since a confrontation between Hong Kong police and protesters opposed to the Fugitive Offenders amendment bill, which was to provide a mechanism for extradition between Hong Kong and Mainland China.  (Photo by Laurel Chor/Getty Images)

“[A]n organisation and its members shall remain criminally liable for the offences they have committed, notwithstanding its disbandment or the resignation of its members,” the Bureau said in a statement issued shortly after HKCTU’s farewell press conference on Sunday evening.

“The Police will continue to spare no efforts in pursuing the legal liabilities of any organization and person suspected of violating the Hong Kong National Security Law … or other laws of Hong Kong,” the statement continued.

“We will conduct thorough investigations in respect of those local organizations which have received donations from foreign political organizations, and will request them to provide information or will take other measures as required,” the Bureau vowed.

The Chinese Communist Party’s rubber-stamp parliament passed a National Security Law for Hong Kong in June 2020 meant to curb ongoing pro-democracy protests in the city at the time. The legislation went into effect in June 2020 and created four new offenses: collusion with foreign forces, subversion, secession, and terrorism.