Google announced on Thursday it is suing the Competition Commission of India (CCI) for allegedly leaking a confidential report detailing the CCI’s ongoing antitrust investigation into the U.S. tech company.

“Today, Google filed a writ petition in the Delhi High Court seeking redress in this matter, specifically protesting against the breach of confidence which impairs Google’s ability to defend itself and harms Google and its partners,” Alphabet Inc.’s Google said in a statement issued September 23.

“We are deeply concerned that the Director General’s Report, which contains our confidential information in an ongoing case, was leaked to the media while in the CCI’s custody,” the statement read.

Google referred to a 750-page CCI report allegedly leaked to the Indian media and reviewed by the Times of India on September 18. According to the report, the CCI, India’s antitrust watchdog, has allegedly found Google “guilty of a variety of charges, including abuse of dominance, denial of market access to competitors, and limiting and restricting technical or scientific development relating to goods or services to the prejudice of consumers.” 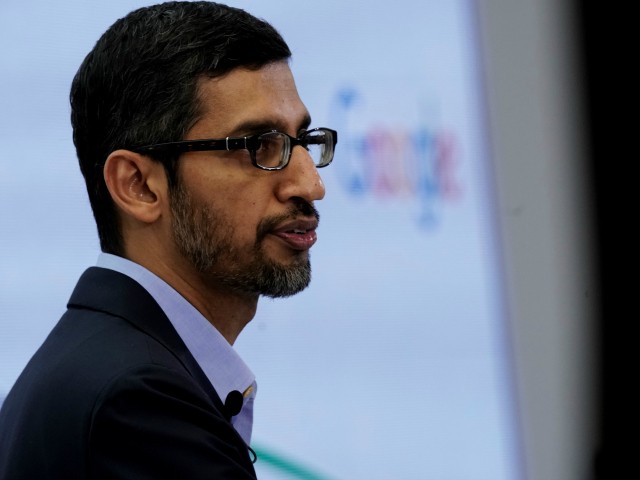 Google CEO Sundar Pichai speaks during a conference in Brussels on January 20, 2020. (Photo by KENZO TRIBOUILLARD/AFP via Getty Images)

The CCI report says it found that the tech giant forces mobile phone manufacturers in India to pre-install its apps, “amount[ing] to [an] imposition of unfair condition[s] on the device manufacturers.”

Google allegedly “leveraged its dominance” of the Indian market — where its Android devices account for 98 percent of all mobile phones used — “to reduce device makers’ ability to opt for alternate versions of its mobile operating system,” Reuters relayed on September 23 after reviewing the leaked CCI report.

The Indian antitrust agency allegedly “found Google India guilty of stifling competition and innovation to the detriment of the market as well as consumers in order to maintain its grip and dominance in search, music (through YouTube), browser (chrome), app library (Play Store) and other key services,” according to the Times of India.

“Competing general search services cannot offset the competitive advantage that Google ensures for itself through pre-installation and thus, acting as an entry barrier for competitors [sic],” an excerpt of the leaked report published by the Times reads.

The newspaper noted that the leaked report is part of an ongoing investigation into Google India. If the company is ultimately found guilty of the alleged competition violations, the U.S. tech giant “could face penalties or be asked to discontinue practices that are seen to distort competition and are anti-consumer based on market dominance.”