U.S. government-funded military equipment given to the Afghan Army during America’s two-decade occupation of Afghanistan has allegedly been spotted in Iran in recent days according to unverified social media photos, Al Arabiya reported Thursday.

“Several US military armored vehicles, which allegedly belonged to the Afghan army before the Taliban took over control of the country, were spotted in Iran on Wednesday, images shared on social media showed,” the Saudi news site wrote on September 2.

“Some of the images shared on Twitter showed trucks belonging to the Iranian army transporting US Humvees, allegedly taken from Afghanistan, on a highway connecting the central city of Semnan to the city of Garmsar, southeast of the capital Tehran,” Al Arabiya added.

Afghanistan’s former defense minister, Bismillah Mohammadi, shared some of the images via his personal Twitter account on September 1. He did not offer any clarity regarding the source of the images:

Al Arabiya said it was unable to independently verify the authenticity of the images, while Iran has not commented on the photos.

Iran shares a 560 mile-long border with Afghanistan, which was taken over by the Taliban terror group last month. The Taliban invaded Kabul, the Afghan national capital, on August 15 and deposed the city’s U.S.-backed government within a few hours. The jihadist group then declared itself the sole ruler of Afghanistan, which it renamed the Islamic Emirate of Afghanistan. The takeover prompted a mass exodus from Kabul and the rest of Afghanistan. 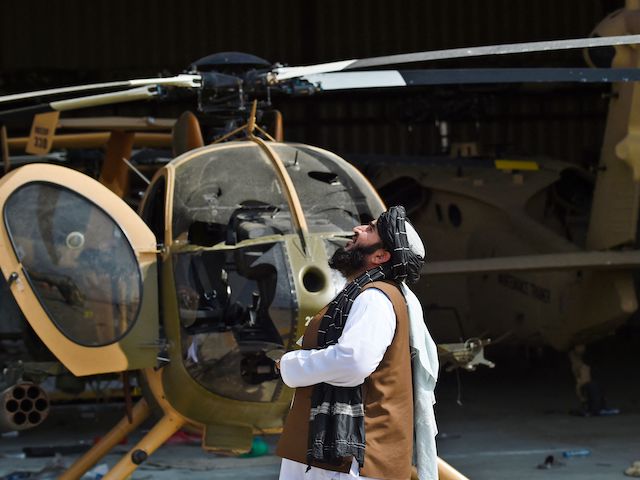 A Taliban member looks up standing next to a damaged helicopter at the airport in Kabul on August 31, 2021, after the US has pulled all its troops out of the country to end a brutal 20-year war — one that started and ended with the hardline Islamist in power. (Wakil Kohsar/AFP via Getty Images)

Muslim Shirzad, a former reporter for the Afghan news site Tolo News, posted a video to his Twitter account on August 31 that purportedly shows hundreds of alleged Afghans walking west from Aghanistan toward Iran. The video’s authenticity has not been independently verified.

The Taliban on July 9 captured Islam Qala, a strategic Afghan-Iran border crossing, as part of its ultimately successful military campaign to reconquer Afghanistan, which it previously ruled from 1996-2001. Starting in May, the hardline Sunni group swept across most of the country, wresting control of key cities and provinces from the U.S.-backed Afghan Army. The Taliban eventually closed in on Kabul, the seat of Afghanistan’s government. The fall of Kabul on August 15 preceded the U.S. military’s complete withdrawal from Afghanistan on August 30 following a nearly 20-year-long occupation of the country.