A large group of women took the streets of Herat, Afghanistan, on Thursday demanding the Taliban give women positions of power in their new, allegedly “inclusive” government.

Afghan media outlets identified the women taking the streets – in defiance of Taliban jihadists’ orders to stay home indefinitely, allegedly for their own safety – as mostly students, government workers, and “women’s rights defenders” who were attempting to defend the gains women had made in the 20 years since the United States invaded the country and ousted the Taliban regime. In addition to demanding the Taliban appoint qualified women to government positions, the women urged the Taliban to allow girls to continue going to school and women to continue holding meaningful jobs in society.

Dozens of Afghan women in Herat province marched on the streets demanding for their rights and preservation of the women achievements in Afghanistan in the Taliban regime. Their slogan reads as ‘Don’t be afraid, we are all together’. pic.twitter.com/7Uaoz05RCC

“No government is sustainable without women’s support. Our demand: the right to education and the right to work in every aspect,” one protest sign read, according to Afghanistan’s Tolo News. Another sign the news network translated read, “violation of women’s rights is equal to the violation of human rights.”

The protesters appealed to the international community to pressure the Taliban to respect their rights as much as to the jihadist organization itself to listen to their demands. The Taliban is the de facto government of Afghanistan and has been running the country since surrounding Kabul, the national capital, on August 15, prompting ex-President Ashraf Ghani to flee to the United Arab Emirates (UAE).

Neither Tolo nor other news agencies in Afghanistan covering the Herat protest offered more concrete estimates for the size of the event other than “dozens.”

Afghan women demands participation in the new government structure plus rights to study and work. pic.twitter.com/iGIxfxLcbi

The protest is the second major event of its kind since the Taliban returned to power in Afghanistan and the first since President Joe Biden completed the withdrawal of American military forces from the country on Tuesday. The first such protest occurred shortly after the fall of Kabul in the capital city. That protest appeared to be significantly smaller but demanded similar respect for human rights and a stake in helping build the Taliban jihadist government.

In the immediate aftermath of their return to power, Taliban terrorists vowed that their new reign would differ significantly from the way they governed from 1996 to 2001, when American forces invaded the country in response to the September 11, 2001, al-Qaeda terrorist attacks. At the time, the Taliban imposed a strict interpretation of sharia, or Islamic law, that banned women from work, education, and nearly any public appearance without male permission. The Taliban forced women to wear burqas, or full-body coverings that prevent viewing of even a wearer’s eyes.

The Taliban has rebranded Afghanistan an “Islamic Emirate” and promised that its new government would again impose sharia, but spokesmen have also claimed that the regime would allow women to work and girls to go to school.

“The Islamic Emirate is committed to the rights of women within the framework of sharia,” Taliban spokesman Zabihullah Mujahid told reporters during his first-ever public appearance, a press conference shortly after the August 15 takeover. “Our sisters, our men have the same rights; they will be able to benefit from their rights. They are going to be working with us, shoulder to shoulder with us.”

Another Taliban leader echoed those sentiments at the time. 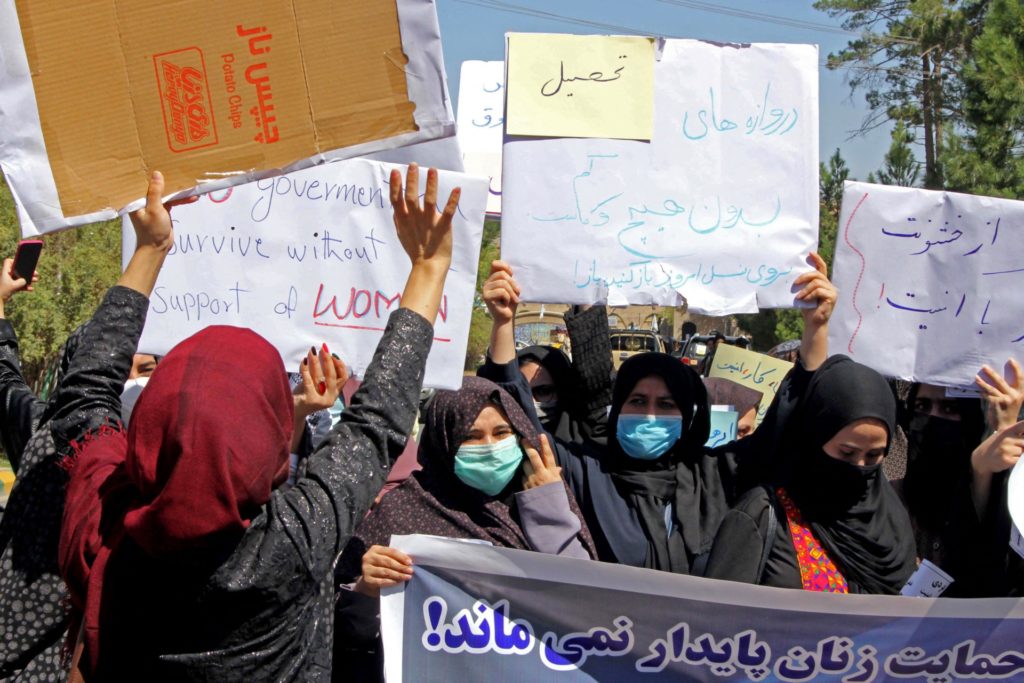 Afghan women hold placards as they take part in a protest in Herat on September 2, 2021. Defiant Afghan women held a rare protest saying they were willing to accept the all-encompassing burqa if their daughters could still go to school under Taliban rule. (AFP via Getty Images)

“The Islamic Emirate doesn’t want women to be victims,” Enamullah Samangani told reporters. “They should be in government structure according to Sharia law.”

Taliban leaders also effusively rejected the return of the burqa, insisting only hijab, or a head covering, would be necessary for women in public. The jihadists, however, soon changed their tune.

A week after asserting that men and women would share equal rights under the Taliban regime – “within the framework of sharia” – Mujahid demanded that all women nationwide stay inside their homes for the foreseeable future.

“We are asking women to stay home at the moment,” Mujahid told reporters. “There are security concerns and once we have that under control, our sisters will be able to return to work.”

The spokesman blamed rank and file Taliban jihadists for the rule, claiming that the senior Taliban leadership still needed to teach them “how to deal with women” to ensure that women did not meet with violence on the streets. He nonetheless insisted that any concerns that women would never be allowed to leave the home were “baseless” and that they would soon find permission to leave their homes with a male chaperone.

Mujahid claimed that women going to work and girls going to school on a routine basis would not need such a chaperone but that women attempting to travel for more than three days would. 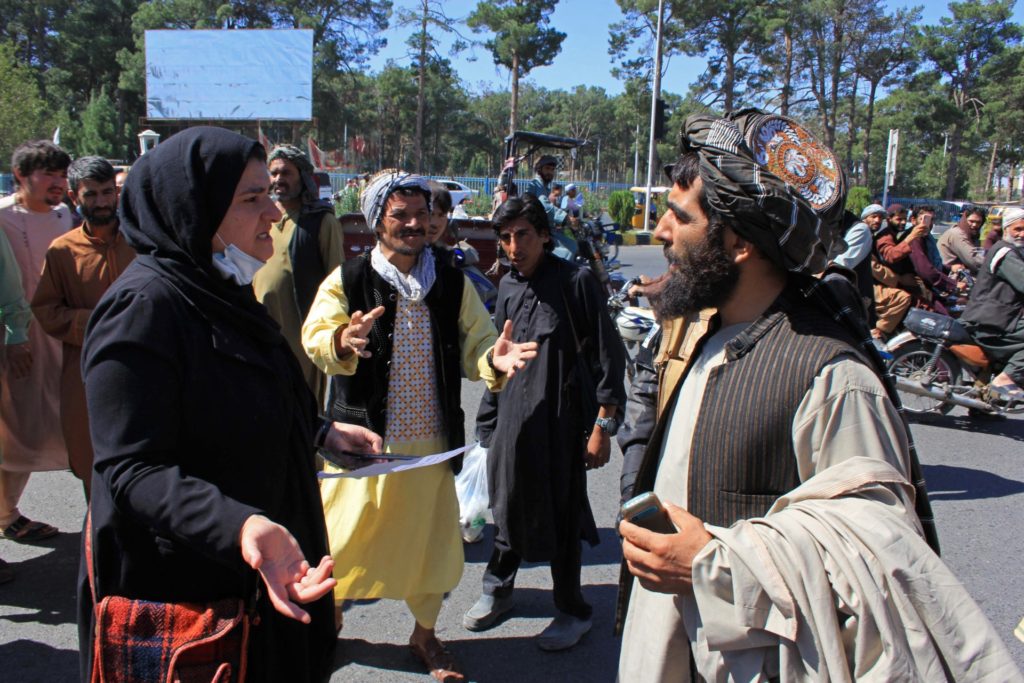 An Afghan woman protester (3L) speaks with a member (R) of the Taliban during a protest in Herat on September 2, 2021. (AFP via Getty Images)

Women working in Afghanistan have refuted Taliban claims that are free to attend work, particularly women in journalism. According to a report published Tuesday by Reporters Without Borders (RSF), fewer than 100 of Kabul’s 700 women journalists are working today as a result of Taliban intimidation.

“Forty-eight hours after the Taliban took control of the capital, women reporters with privately-owned TV channels such as Tolonews, Ariana News, Kabul News, Shamshad TV and Khurshid TV had dared to resume talking on the air and going out to cover events,” RSF noted. “But media executives quickly found that they were being harassed … tearful women journalists described how Taliban guards stationed outside their media prevented them from going out to cover stories.”