Pakistan Ambassador to Kabul Mansoor Ahmad Khan said in an interview published Wednesday that his nation hoped to see the Taliban “utilize this historic opportunity” following the collapse of the nation’s government “for regional peace, progress, and stability.”

Pakistani Prime Minister Imran Khan, an avowed Islamist who has called for global laws against “blasphemy” and praised dead al-Qaeda chief Osama bin Laden as a “martyr,” celebrated the Taliban’s conquest of Afghanistan following the collapse of the government in Kabul on August 15, stating that the nation had undone the “shackles of slavery” allegedly imposed on it by the United States. His administration has since focused on pressuring the international community to support the Taliban, a jihadist terrorist organization, in the efforts it claims it is making to evolve into a legitimate state government.

Taliban officials claimed on Wednesday that they were about two days from announcing the new leaders of the “Islamic Emirate of Afghanistan.” 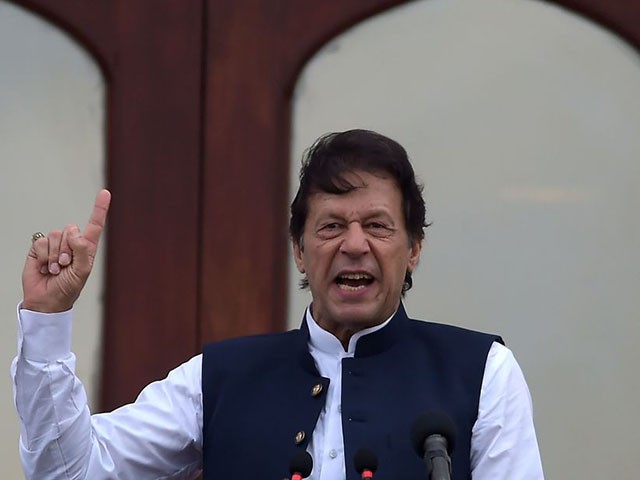 “After decades of conflict, Afghanistan needs a comprehensive political settlement for lasting peace and stability,” Khan, the Pakistani ambassador, told the country’s Express Tribune newspaper. He notably omitted naming the Taliban as the government of Afghanistan in his remarks, instead referring to an unspecified coalition participating in an “inclusive political process.”

“We can collectively help Afghans, bring an end to the internal conflict through a participative process, through an inclusive political process that leads to the formation of a new political system, a new government,” Khan said, “which has participation of all ethnic groups.” 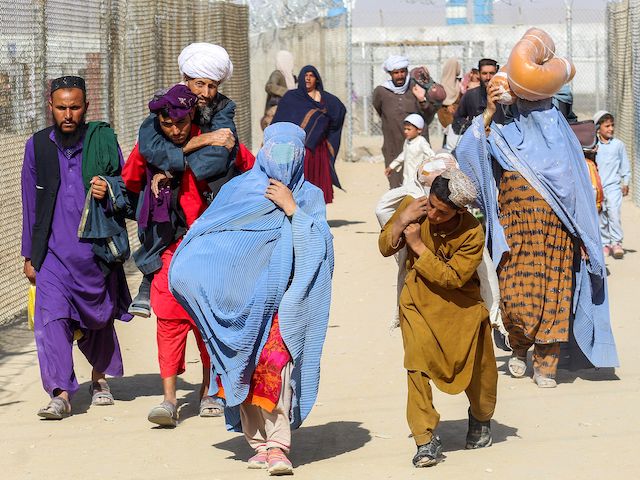 Afghans walk along fences as they arrive in Pakistan through the Pakistan-Afghanistan border crossing point in Chaman on August 24, 2021, following the Taliban’s military takeover of Afghanistan. (AFP via Getty Images)

While Pakistan has not formally recognized the Taliban as the official government of Afghanistan, its diplomats have spent much of the past two weeks reaching out to other nations urging them to invest financially in the success of the Taliban. Foreign Minister Shah Mehmood Qureshi made his latest appeal on Tuesday in a meeting with German counterpart Heiko Maas in Islamabad.

“This is a pivotal moment in Afghanistan’s history. The international community must remain engaged. Humanitarian assistance must flow. Do not let the economic collapse in Afghanistan take place,” Qureshi insisted. As no alternative exists in Afghanistan currently, all such assistance would necessarily flow through the Taliban.

Maas also discussed the Taliban takeover with Prime Minister Khan, who also “underlined that urgent steps were needed to stabilise the security situation, address humanitarian needs, and ensure economic stability in Afghanistan,” according to the readout from the prime minister’s office. 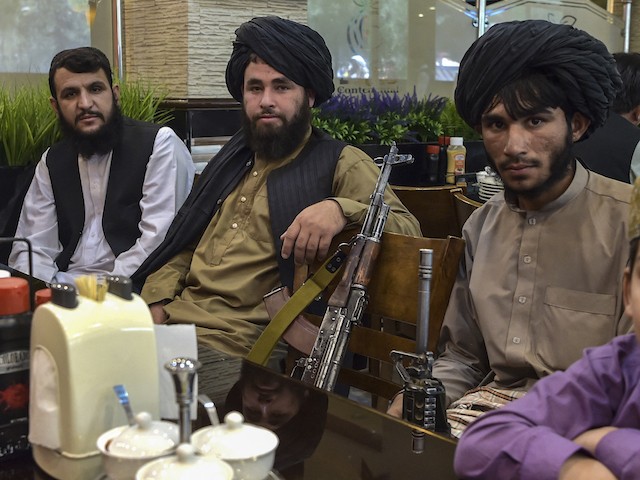 Taliban fighters wait for their meals to be served as they lunch at a restaurant in Kabul on August 26, 2021, after the Taliban’s military takeover following the U.S. troop withdrawal. (Wakil Kohsar/AFP via Getty Images)

Following the German diplomat’s visit, Islamabad received Dutch Foreign Minister Sigrid Kaag on Wednesday. Afghanistan would make up much of Kaag’s conversations with counterpart Qureshi, the Pakistani Foreign Office said in a statement on the meeting.

Prime Minister Khan has not expressed any concerns about having a terrorist organization take over a nation that shares an extensive border with Pakistan. On the contrary, he celebrated that the Taliban’s deposition of the former Afghan government was a defeat for the United States, which ousted the Taliban from power in 2001.

“You take over the other culture and become psychologically subservient. When that happens, please remember, it is worse than actual slavery,” Khan said on August 16, the day after the takeover of Kabul. “It is harder to throw off the chains of cultural enslavement.”

“What is happening in Afghanistan now, they have broken the shackles of slavery,” Khan continued.

Khan had previously insisted that the Taliban must play a role in any future Afghan government. 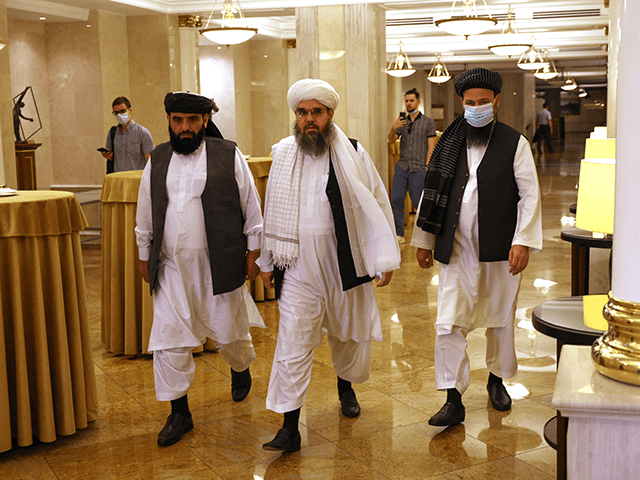 Taliban leaders themselves have emphasized how important the group considers international legitimacy in multiple pleas to the world for foreign investment and diplomatic ties. Shortly after the confirmation on Tuesday that President Joe Biden had withdrawn all U.S. military forces from Afghanistan, Taliban spokesman Zabihullah Mujahid urged Washington to recognize and form ties with the Taliban.

“We want all countries in the world, including the United States, to recognize us,” Mujahid said. “We are part of the world. We assure you that the soil of Afghanistan will not be used against any country or anyone.”

Suhail Shaheen, another Taliban spokesman, insisted shortly after the Taliban takeover of Afghanistan that any sanctions on the Taliban – particularly the freezing of Afghan government assets by the World Bank and International Monetary Fund (IMF) – were “an injustice.” Shaheen implied that the Taliban could not sustain a government without foreign funding.