Karzai and Hekmatyar, alongside former Afghan government peace negotiator Abdullah Abdullah, had announced the formation of their own “coordination council” last week to help Taliban jihadists organize a functional government following their ouster of the U.S.-backed government in Kabul on August 15. Karzai went on a media tour including both legitimate outlets like the Associated Press and Chinese state propaganda outlets like the New York Times this summer, disparaging America – despite its pivotal role in his ascent to power – and calling for China to play a bigger financial role in the future of Afghanistan.

Karzai became president in the aftermath of the American invasion of Afghanistan in autumn 2001, which resulted in the ouster of the then-incumbent Taliban regime. He served as president until 2014, running a government defined by rampant corruption, nepotism, and record-breaking narcotics cultivation. Estimates of how much money Karzai and his family stole from U.S. taxpayers range into the billions.

Taliban jihadists took over Afghanistan again on August 15, surrounding Kabul and prompting ex-President Ashraf Ghani to flee the country. Taliban spokesmen have repeatedly promised in press statements that the jihadists would commit to building a functional state apparatus, suggesting that the regime would likely consist of a supreme council, directed by radical Islamist clerics, that would ensure “inclusive” government.

The Russian news agency Tass reported on Wednesday, citing Afghanistan’s Ariana News TV, that the Taliban had agreed to give seats on its governing council to Karzai, Abdullah, and Hekmatyar. Taliban spokesmen have yet to confirm the report at press time. Tass also reported, citing Foreign Policy, that the three men are likely to be part of a “a 12-man council to rule Afghanistan.” Foreign Policy also predicted that members of the former government may also surface as ministers in charge of various government agencies, in addition to having seats on the council, as a concession to international observers.

Joining Karzai and his coordination council will likely be members of the Haqqani network, one of Afghanistan’s deadliest terrorist organizations. Mullah Abdul Ghani Baradar, a Taliban co-founder and most powerful man in the organization, will likely serve as supreme leader.

The Washington Post reported this week that Baradar, in an attempt to transform his terrorist organization into a government, met with CIA leader William Burns this week. Taliban spokesman Zabihullah Mujahid denied the report during a press conference Tuesday. 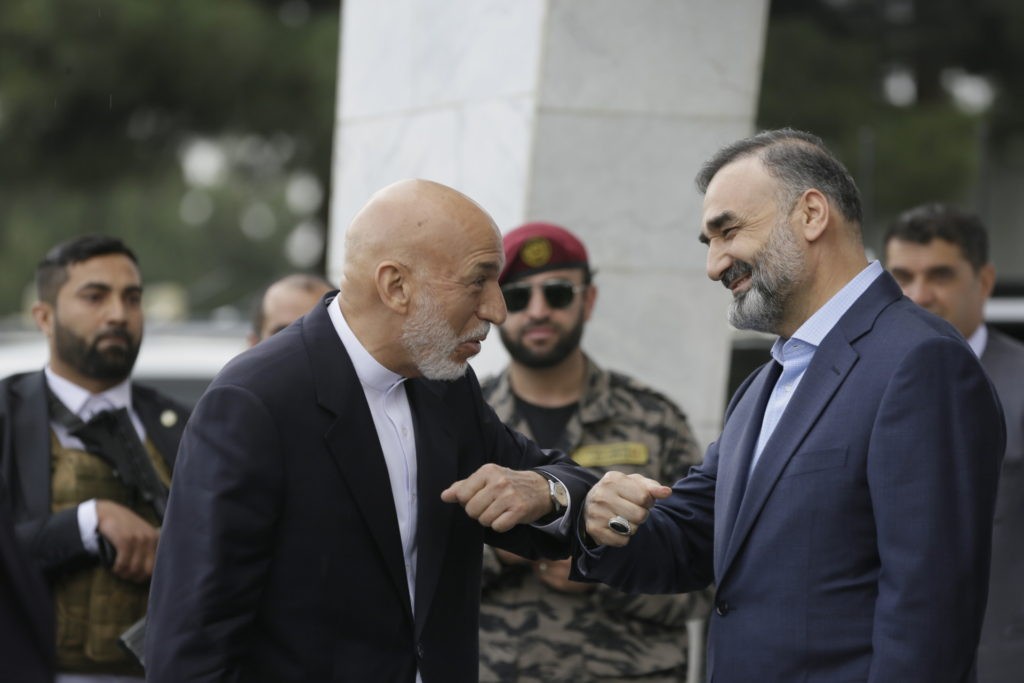 Mujahid, in his first press conference a week ago, appeared to hint that Abdullah, Hekmatyar, and Karzai would play senior roles in the Taliban’s government despite their longstanding positions against the terrorist organization. Asked about reported meetings with the three, Mujahid said, “let’s just say, that very soon we will be witnessing the formation of the government, announcing the government.”

Mujahid repeated on Monday his call for the world to have patience with the Taliban as it attempted to design a new regime for the country. The spokesman said, according to Afghan news agency Khaama Press, that “religious scholars” would take the most powerful positions in the government, though he again insisted the regime would be “inclusive” of all sectors of Afghan life.

The appointments the Taliban has made public since taking over the country indicate that the group does not have a significant number of people with political management experiment among its ranks to promote. Khaama Press reported on Tuesday that Taliban leaders had announed the appointment of several jihadis to key positions such as minister of education and head of the central bank. Karzai and his team would appear to fill a void of experience.

Karzai was Afghanistan’s head of state for 13 years. In an in-depth report published in 2010, the New York Times, revealed that Karzai largely used that power to appoint unqualified members of his family to high-ranking government positions, resulting in the disappearance of billions, much of it American money offered as aid to keep the Afghan government afloat.

“American officials say the Karzais and a handful of other well-connected families have benefited from the billions of dollars that the United States has poured into the country since 2001,” the Times reported.

Confronted by the Associated Press over the widespread corruption he presided over in 2019, Karzai blamed the U.S. government for tempting him with aid for years.

“What could we do?” Karzai shrugged.

Last month, Karzai described the U.S. government’s role in Afghanistan – not his own as president – as “total disgrace and disaster.” He urged the Chinese Communist Party to fill the void of U.S. aid in the country, calling it “a very constructive player.”

Unlike Karzai, Hekmatyar offers less in the way of formal government experience. A mujihadeen by trade, the “butcher of Kabul” developed a reputation as “a sociopath and a warlord” in the 1990s.

Hekmatyar, journalist Terry Galvin described, “almost single-handedly turned Kabul to rubble during the early 1990s,” according to Australia’s News.com.au. Hekmatyar is believed to be responsible for the deaths of 50,000 people.