The Russian embassy in Kabul, the capital of Afghanistan, claimed on Monday that former President Ashraf Ghani had fled the country with four cars and a helicopter stuffed with cash.

The embassy alleged that Ghani attempted to smuggle so much money into his helicopter that it did not physically fit into the air frame, according to Russian news agency Tass.

The Taliban, the jihadist terrorist organization that ruled Afghanistan prior to 2001, seized Kabul on Sunday after launching tens of thousands of attacks nationwide to retake the country from the former government. Taliban jihadis surrounded the capital on Sunday, prompting reports of a negotiated surrender by the Afghan government. The Taliban reportedly took over the presidential palace after Ghani abruptly fled.

The Taliban’s return to power apparently ends the 20-year-old Afghan War, which began following the September 11, 2001, terrorist attacks in the United States by the international terrorist group al-Qaeda. American forces invaded after the attacks due to the Taliban’s close ties to al-Qaeda, replacing the group with handpicked leaders including corrupt former President Hamid Karzai. While Ghani fled, Karzai is reportedly in Kabul attempting to negotiate a place for himself in the Taliban government.

“As for the reasons of the collapse of the regime, they are characterized by how Ghani fled the country,” an unnamed Russian embassy employee told Tass on Monday. “Four cars were packed with money, and they tried to cram another bag of cash into the helicopter. Not all the cash managed to squeeze in, and some of the money was left lying on the airfield.”

Other Russian news agencies identified the employee as spokesman Nikita Ishchenko, who also reportedly spoke to Reuters. He claimed that he had eyewitnesses who could corroborate the report. 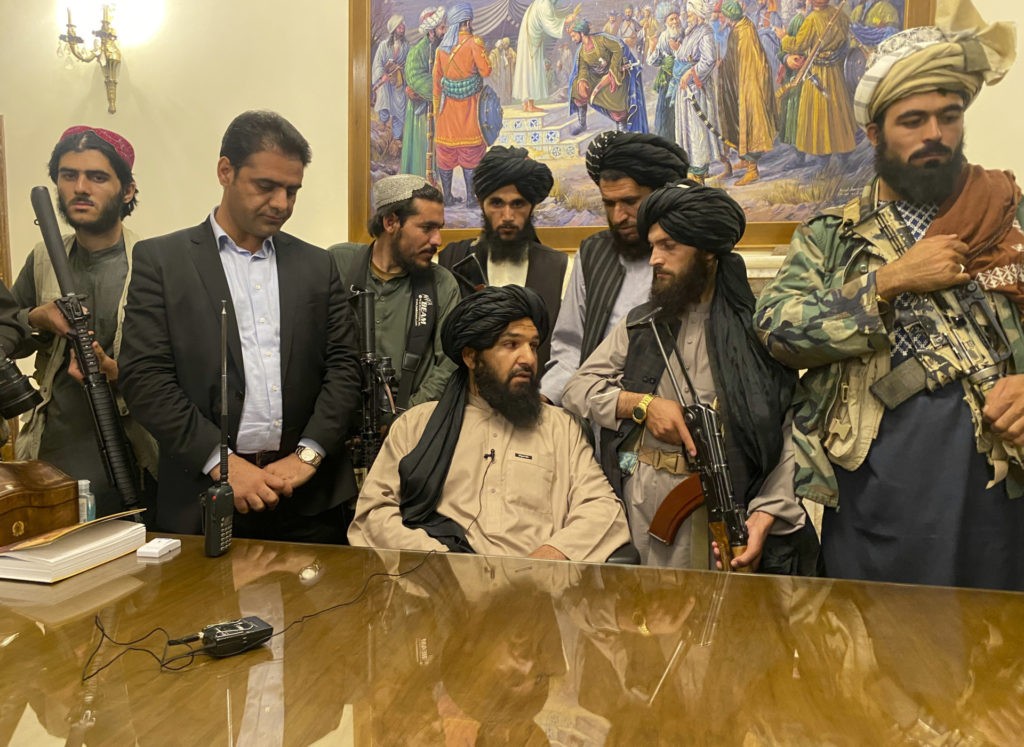 Many unverified rumors suggest that Ghani is still seeking a country that will take him. Initial reports claimed that he attempted to flee to Tajikistan, but the government there denied him entry. Tajikistan has taken over 1,000 Afghan soldiers fleeing across the border in the face of Taliban advances. Many fled, according to interviews with former Afghan officials, because the former Ghani government was so corrupt it did not bother to feed troops, much less adequately arm them to fight the Taliban.

Iran’s state-run Mehr News Agency reported on Monday that Ghani is currently in Oman, but did not cite any sources to confirm this. It added that reporters believe Ghani is attempting to seek refuge in the United States.

Ghani last appeared before Afghan citizens in a pre-recorded speech on television on Saturday night. In his remarks, Ghani vowed that he would remain in Afghanistan and fight the Taliban to prevent “further killings, loss of the gains of the last 20 years, destruction of public property and continued instability.”

“Under the current situation, remobilizing of the security and defense forces is our top priority and required measures are underway for this purpose,” Ghani said, claiming to be in the process of rebuilding the Afghan military.

Less than 24 hours later, other Afghan officials confirmed that Ghani had fled.

“The former president of Afghanistan left Afghanistan, leaving the country in this difficult situation,” Abdullah Abdullah, a former presidential election rival to Ghani and current head of the Afghan National Reconciliation Council, said on Sunday. “God should hold him accountable.”

Someone using Ghani’s official Facebook account posted an update, claiming to be Ghani, late on Sunday. It did not clarify his location or future plans.

“Today, I faced a hard choice: either stand and face the armed Taliban, who wished to enter the palace, or leave my dear country that I dedicated my life to protecting,” the Ghani account post read. “In order to avoid a flood of bloodshed, I thought it was best to get out.”

The post advised the Taliban “to assure all the people, nations, different sectors, sisters and women of Afghanistan” that it would government for him and to “win the hearts of the people.”

“I will always continue to serve my nation with an intellectual moment and a plan to develop. Lots more talk for the future,” the Ghani post promised.

Rumors that Ghani and other senior officials had fled the country caused chaotic scenes at Kabul’s international airport, according to those in the capital. Mobs swarmed the tarmacs attempting to get onboard U.S. military planes as commercial airlines indefinitely canceled their flights, reportedly causing at least three deaths as of Monday.

“All the VIPs were being allowed to fly out first, all their cash was being transported first,” Kamal Alam, a nonresident senior fellow at the Atlantic Council, told CNBC on Monday. “So people were seeing this, there was a lot of resentment and anger from the airport security, and that is really where the rot started. That’s when people started saying this government and this president is not worth defending, let’s get out of here.”

Like Karzai before him, Ghani’s government was defined by widespread corruption at almost every level. Afghan officials themselves documented and exposed the corruption to no avail. In May, former Finance Minister Mohammad Khalid Painda told the nation’s lawmakers that his investigations had revealed that Afghan customs officials embezzled $8 million a day. He said that as much as 80 percent of customs revenue was going “to the mafia and the Taliban.”