Members of the Taliban terror group allegedly beheaded an Afghan man in May who previously worked as a translator for the U.S. Army, the Jerusalem Post reported on Sunday.

During a five-hour road trip from Afghanistan’s national capital, Kabul, to Khost province on May 12, members of the Taliban allegedly stopped Sohail Pardis, 32, at a checkpoint. Villagers from a nearby desert settlement who allegedly witnessed the incident told the Red Crescent the Taliban terrorists shot Pardis’s vehicle after he attempted to accelerate through the checkpoint, causing his car to “swerve and stop.” The jihadists “then dragged Pardis out of the vehicle and beheaded him.”

Days before the alleged incident, “Pardis had confided to his friend that he was receiving death threats from the Taliban, who had discovered he had worked as a translator for the United States Army for 16 months during the 20-year-long [War in Afghanistan] conflict,” CNN reported on July 23.

Sohail Pardis was one of thousands of Afghan interpreters who worked for the US military and now face persecution by the Taliban, as the group gains control of wider swaths of the country. https://t.co/fJlJHQeHUi

“They were telling him you are a spy for the Americans, you are the eyes of the Americans and you are infidel, and we will kill you and your family,” Pardis’s friend and fellow ex-translator for the U.S. Army, Abdulhaq Ayoubi, told CNN.

Pardis was one of “thousands of Afghan interpreters who worked for the US military and now face persecution by the Taliban, as the group gains control of wider swaths of the country,” according to CNN.

“A Taliban spokesperson told CNN that they were attempting to verify the details of the incident but said some incidents are not what they are portrayed to be,” the American news outlet reported.

The U.S. will fully withdraw all military personnel from Afghanistan by August 31. The troop pullout, already in effect in May at the time of Pardis’s alleged killing, is part of a joint U.S. and North Atlantic Treaty Organization (NATO) exit from Afghanistan following the two entities’ 20-year-long joint military operation in the country. The U.S. launched the War in Afghanistan in late 2001 by ousting the Taliban from Afghanistan’s government. The jihadist terror group has re-conquered at least 85 percent of the country in the wake of the nearly completed western troop withdrawal. The Sunni Islam-based terror group has already reimposed sharia (Islamic) law in certain regions of Afghanistan and threatens to seek revenge on Afghan civilians who aided U.S. and NATO forces during their two-decade-long campaign against Taliban terrorists. 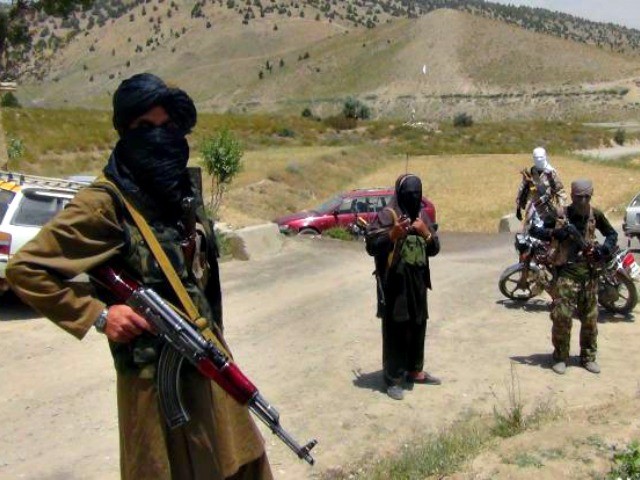 Fighters with Afghanistan’s Taliban militia stand with their weapons in Ahmad Aba district on the outskirts of Gardez, the capital of Paktia province, on July 18, 2017. (FARIDULLAH AHMADZAI/AFP/GETTY)

The Taliban issued a statement on June 7 claiming its members would not “perturb” Afghans who aided western military forces during the War in Afghanistan if they demonstrated “remorse” for their actions. Afghans who worked with NATO troops “should show remorse for their past actions and must not engage in such activities in the future that amount to treason against Islam and the country,” according to the statement.

“But none should currently desert the country. The Islamic Emirate [Taliban] will not perturb them, but calls them to return to their normal lives and if they do have expertise in any field, to serve their country. They shall not be in any danger on our part,” the terror group alleged.

“An estimated 300,000 Afghan civilians have worked for international forces in some capacity since the U.S.-led invasion [of Afghanistan] in 2001, including as cooks, cleaners, manual laborers, mechanics, interpreters, and security guards,” the U.S. government-funded Radio Free Europe/Radio Liberty (RFE/RL) reported last month.