Ngari is sometimes called the “roof of the world” for its soaring heights and thin air. Its mountains are among the most difficult to climb in the world. One of them, Mount Kailash, is closed to mountain-climbing expeditions because it is considered holy ground by Hindus, Buddhists, and other regional faiths. The average altitude of Ngari is 4,500 meters.

According to the Global Times, the exoskeletons provided to PLA troops in Ngari are “particularly effective in missions such as supply delivery, patrol, and sentry duty.”

The suits make it easier for soldiers to carry heavy weights across long distances with lower risks of injury, an important capability for troops stationed in Ngari because the lower oxygen content of high-altitude air makes every load feel heavier and every march seem longer.

The Global Times reported that precise specifications for the exo-suits have not been divulged by the PLA, but they are believed to be “lightweight, non-powered” equipment. The South China Morning Post (SCMP) said the suits are “very light,” made from “super-strong synthetic carbon fiber material,” and developed by the China Aerospace Science & Industry Corporation.

Last year, the PLA inaugurated a “Super Warrior” competition for military contractors and research institutes to demonstrate various exoskeleton designs, from the relatively simple mechanical augmentations evidently shipped to Ngari to elaborate powered and computer-controlled suits that could more dramatically enhance the physical abilities of wearers, at much greater expense and with higher risk of equipment failure. The PLA would like to eventually incorporate weapons into the suits, with the end goal cheerfully acknowledged by participants in the Super Warrior expo: 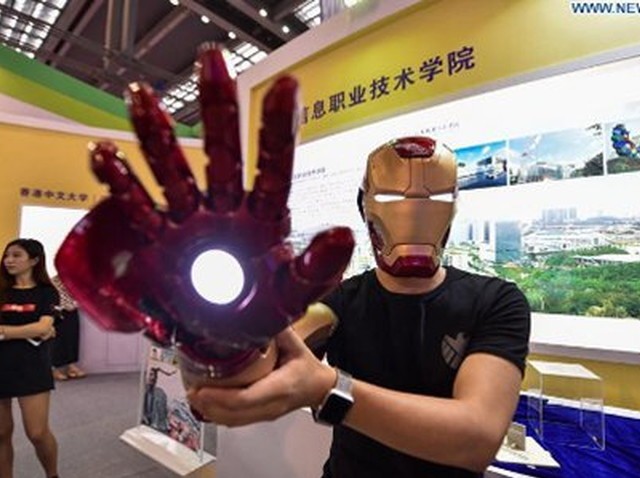 Photo via the Global Times

The U.S. military is also experimenting with exoskeleton technology, including a design from major military contractor Lockheed Martin. Some of the more modest proposals include augmentation for only a few key parts of a soldier’s body that are highly susceptible to strain, such as an augmented boot that could be easily deployed without extensive training for the users and would help troops move across rough terrain more easily. On the other end of the scale are hulking full-body armors that increase human strength tenfold.

Chinese state television reported the PLA began testing a new generation of exoskeletons in November, but those models were powered and apparently intended for troops performing highly weight-intensive activities such as handling heavy crates of ordnance and evacuating wounded soldiers from the battlefield.

Russian state media reported in October that the Russian military is also testing exoskeletons that can be used in combat. The Russian system appeared to integrate smoothly with standard-issue battle dress and was designed to modestly increase the soldier’s ability to carry heavy equipment and move for long periods of time, unlike earlier Russian exo-suit projects that incorporated heavy armor and weapons.

In addition to the exo-suits, the SCMP reported Chinese troops stationed along the Himalayan border with India have been given oxygen generators and portable hyperbaric chambers to help them cope with the high-altitude environment. Drones have been employed to deliver hotpot meals to the troops.

On the other side of the border, Indian forces are importing “extended cold weather clothing systems” from the United States, but may not have enough of them to cover all of the troops moved into the Himalayas as India’s border conflict with China escalated over the past year. The PLA is very proud of the extensive infrastructure it swiftly constructed in the region and the high-tech equipment that helps its soldiers operate in the extreme high-altitude environment, while Indian troops have more experience in the region and evidently enjoy more support from lifelong residents of the challenging area.