Christians in Sri Lanka were forced to celebrate Easter on Sunday at home, leaving churches empty the first year after a series of jihadist suicide bombings killed and dismembered 253 people in six different locations.

Sri Lanka banned both Christian services to observe the holiday and any public memorials for the dead.

Sri Lanka is currently under a nationwide quarantine order that will be in place until at least April 20, authorities confirmed on Monday. The “work from home” period is meant to slow the spread of the Chinese coronavirus, which at press time has infected 214 people and killed seven on the island nation.

The 2019 terrorist attacks occurred on April 21. Should the lockdown lift, Catholic authorities are reportedly planning a memorial event then.

The Chinese coronavirus pandemic has resulted in yet another somber Easter for the nation’s Christians, marked by stern warnings from President Gotabaya Rajapaksa not to congregate for Easter celebrations and remarks from Malcolm Cardinal Ranjith, the archbishop of Colombo, in which he declared that the suicide bombers responsible were “forgiven.”

“At this moment when the country is faced with a grave challenge to the health of the people, the government expects the Christian community to stay at homes in accordance with the advice of the Government and health officials and pay obeisance to Jesus Christ,” President Rajapaksa, elected in November as part of a national backlash against the incumbent during the bombings, said in a statement on Sunday.

“I wish that you, your family, and the entire society would be able to absolve yourselves from sins by faithfully recalling the message of Jesus.” 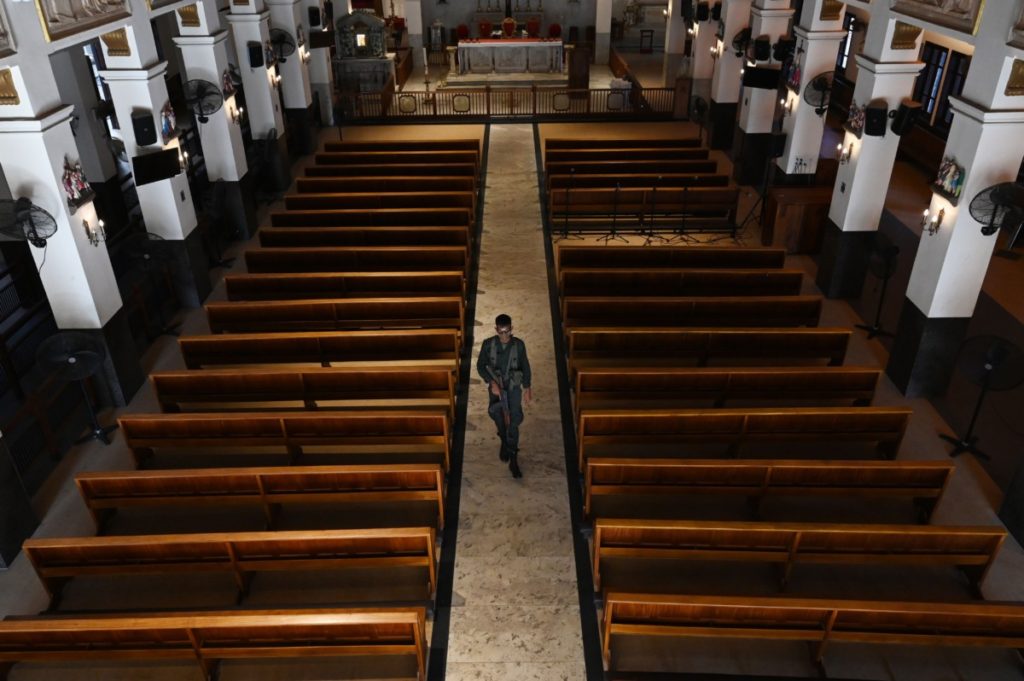 A Sri Lankan army soldier walks inside the empty St Anthony’s church on the first anniversary of the 2019 Easter Sunday bombings in Colombo on April 12, 2020, as the country remains under an indefinite curfew as part of measures to contain the spread of the COVID-19 coronavirus in the country. Sri Lanka’s Roman Catholic Church said on April 12 it had forgiven the suicide bombers behind the attacks that killed at least 279 people last Easter. Cardinal Malcolm Ranjith told an Easter mass — broadcast from a TV studio because of the coronavirus pandemic — that “we offered love to the enemies who tried to destroy us”. (LAKRUWAN WANNIARACHCHI/AFP via Getty Images)

On Easter Sunday 2019, six suicide bombers struck three churches and three hotels serving Eastern brunch meals at their most crowded times. The initial death toll was observed to be 359 people and later revised to 253 because the bombs caused so much dismemberment that authorities found it challenging to identify various remains as coming from one person. At churches, eyewitnesses stated that the bombers made sure to detonate their explosives at the back, where parents typically congregate with young children so that they can make a quick exit in the event the child becomes fussy and interrupts Mass. Similarly, the suicide bombers at the hotels detonated near restaurants serving traditional Easter brunches, which tend to attract large families and Christian foreigners.

“I couldn’t bear to watch burning babies and children. But everyone rushed in to help. This is a brutal strike,” one eyewitness identified as “Hamza” told Sri Lanka’s Daily Mirror at the time.

Authorities identified the perpetrators of the attack as members of National Thowheed Jama’ath, a jihadist organization that had expressed support for the Islamic State. Police have arrested 135 people so far in connection to planning and executing the attack.

Sri Lanka opened its churches for the first time after the attack on the weekend of May 13. Churches conducted body searches of visitors and ensured no large bags would get in. The churches also banned use of the parking lots.

Christian clergy endeavored to use the message of hope inherent in the Easter holiday to send a positive message this weekend.

Pastor Kumaran, who tended to the congregation of the bombed Zion Church in Batticaloa, told the Christian aid group Open Doors this month that watching members of his church running out carrying parts of bodies, some of them on fire themselves, and finding out that he had lost his 12-year-old son to the blast was harrowing.

“I saw dead bodies. People were carrying the bodies. I saw my co-workers, believers. They were screaming, crying. Blood was all over the place,” the told the group.

A year later, Kumaran, a convert from Hinduism, said that he had resolved to use the experience to spread Christianity.

“What happened on April 21, 2019, is we gave our loved ones for this country. Through that, we expect to receive souls from elsewhere,” Kumaran said. “We have hope that God will give us Muslims, Hindus, Buddhists. Pray for our vision to reach 20,000 new souls in Sri Lanka. We want to reach villages for Christ.”

“The Easter festival reminds us that, even when the world is in turmoil, our Lord is with us. At the same time, we must not forget the catastrophe that occurred on Easter Sunday lat year,” Father Dilusha Chamara of St. Anthony’s Shrine in Kochchikade, one of the three targeted churches, told Sri Lanka’s News First. “The memory of our departed brothers and sisters lives within us and we will be invoking blessings in all of them at the Kochchikade shrine. I pray that all people will feel the true joy of Easter within their homes.”

Cardinal Ranjith used his televised Easter sermon to offer forgiveness to the jihadists responsible for the attack.

“Last year, some misguided youths attacked us and we as humans could have given a human and selfish response, but we meditated on Christ’s teachings and loved them, forgave them and had pity on them,” Ranjith said. “We did not hate them and return them the violence.”

On Friday, Ranjith remarked on the Chinese coronavirus pandemic, suggesting that the virus was manmade.

“Covid-19 [the Chinese coronavirus] could have been caused by someone who tried to create some product to make lives easier like the way things are done today,”Ranjith said. “People including Christians have forgotten that suffering is part and parcel of Christian life. This is why science is used extensively to produce things such as genetically modified food.”