The city of San Fernando, Philippines, canceled its annual Good Friday crucifixions for the first time in decades this year, abiding by Chinese coronavirus quarantine measures. Some towns and cities did mark the holiday with socially distanced processions and acts of flagellation.

The Philippines is one of the world’s most Catholic countries. Over 80 percent of the nation, 90 million people, identifies as Catholic; including other Christian faiths, over 90 percent of the country observes Good Friday. Many devotees commit acts of panata, or self-sacrifice, on Good Friday in honor of Jesus sacrificing his life for humanity.

The most extreme version of these acts are the crucifixions, which happen every year in San Fernando. Last year, the city crucified eight men and one woman, many of them longtime veterans of the practice. Residents participate by dressing up as Roman soldiers and jeering those crucified, emulating the Romans of the time.

Ruben Enaje, who would have been crucified for the 34th time on Friday, began the practice in 1986 after, he says, surviving a three-story fall unscathed. He described euphoria following his crucifixion in 2018.

“In the past, I went home injured and limping, but this year I feel so great,” Enaje said that year. “I feel like he [Jesus] is telling me ‘go ahead, keep it up.’”

“I talked with the village chairman and he said we should postpone it because of the worries that many foreign tourists might come here and we might get infected if some of them have the virus,” Enaje said, adding he was “disappointed,” but that he would still participate in a ceremony carrying a cross through the town to express his devotion.

San Fernando Mayor Edwin Santiago reportedly sent resident a notice canceling the event, emphasizing that the city did not intend to disrespect believers, but “we actually are protecting them from the disease that may put them and their family at risk.”

Elsewhere on Luzon, the Philippines’ most populous island, most observed the holiday with livestreamed Mass ceremonies. Some cities held their annual Good Friday processions but observed the ongoing lockdown by preventing crowds from participating. The result was haunting images of procession carriages greeting empty streets and priests conducting religious ceremonies with a megaphone seemingly to no one in sight.

In Manila, men in protective masks took the streets to perform acts of flagellation, standing at least six feet from observing believers. Some participated in processions by marching alone, carrying crosses and Catholic icons.

“We are here because we want the spread of Covid-19 [Chinese coronavirus] to end and we pray that things in our country will go back to normal,” on devotee, identified as Edward Degusano, told Reuters. Degusano joined a self-flagellation ceremony.

The processions do not appear to be legal as per President Rodrigo Duterte’s strict lockdown, which he ordered police to enforce by killing violators. The Spanish newswire service EFE indicated the religious rites went on peacefully, however, until police dispersed the individuals, but no violence was reported. 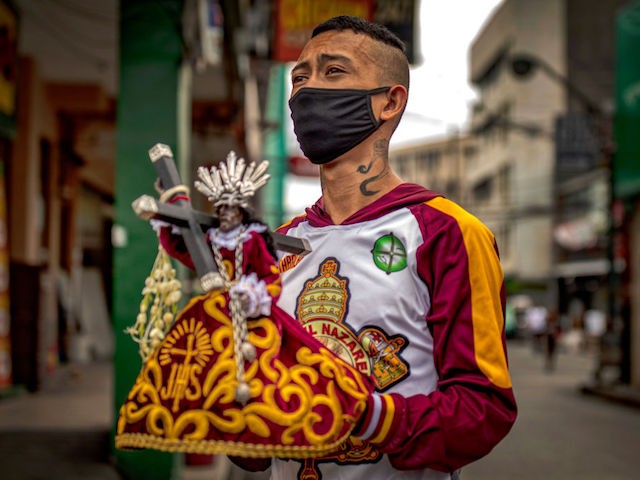 A Catholic devotee carries a figure of Jesus carrying the cross while he prays outside a closed church, defying government orders to avoid religious gatherings and stay home to curb the spread of the coronavirus, as he commemorates Good Friday on April 10, 2020 in Manila, Philippines. (Ezra Acayan/Getty Images) 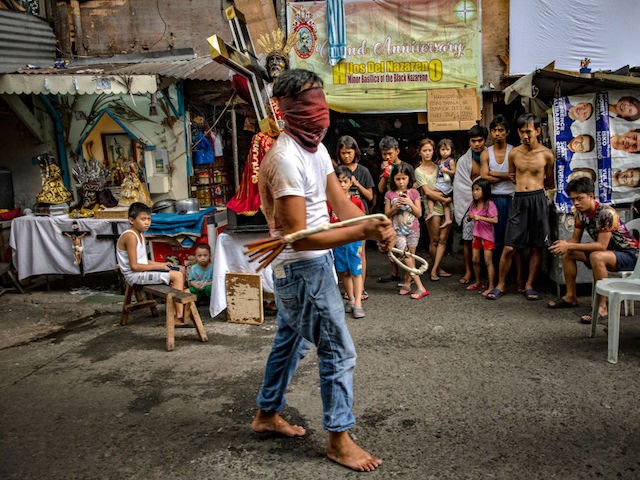 A barefoot flagellant whips his bloodied back along a street as penance, defying government orders to avoid religious gatherings and stay home to curb the spread of the coronavirus, as he commemorates Good Friday on April 10, 2020, in Manila, Philippines. (Ezra Acayan/Getty Images) 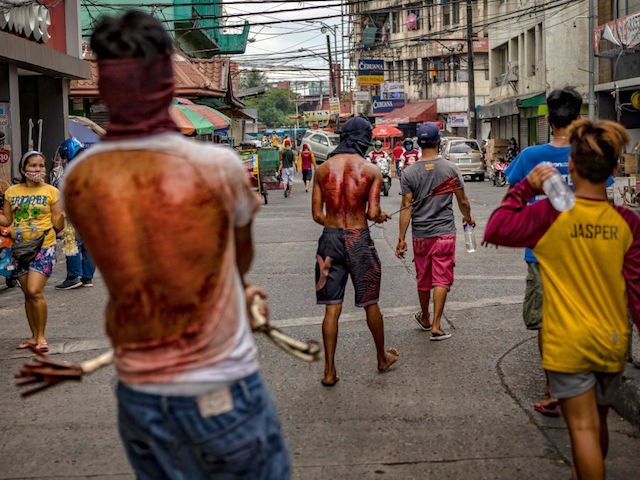 Barefoot flagellants whip their bloodied backs along a street as penance, defying government orders to avoid religious gatherings and stay home to curb the spread of the coronavirus, as they commemorate Good Friday on April 10, 2020 in Manila, Philippines. (Ezra Acayan/Getty Images)

Some also participated in processions by praying and raising their hands from a distance while wearing face coverings. Most did so outside of Manila’s churches, which are closed by law. 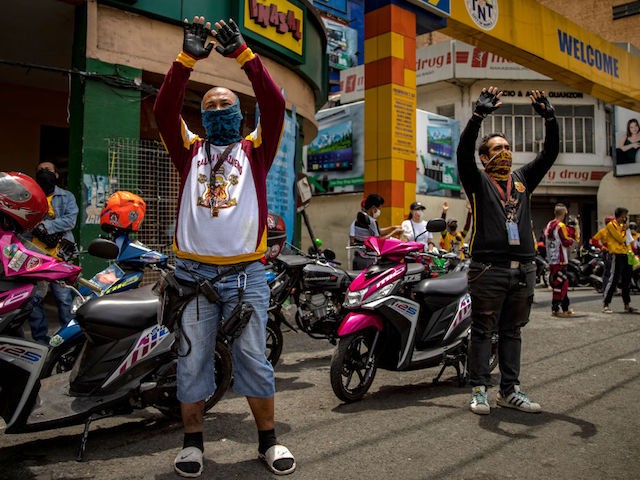 The Philippines has documented 4,195 cases of the Chinese coronavirus and 221 deaths as of Friday. Duterte took the opportunity of his Holy Week address to encourage citizens to use the time under quarantine for reflection and prayer, despite being a fierce critic of the Vatican. Duterte, who claims to have been the victim of sexual assault by a Catholic priest as a minor, has previously urged Filipinos to “kill bishops.”

“The opportunity for solemn prayer and reflection gives us a magnified view of the victory that is found in enduring sacrifice,” Duterte said on Holy Thursday. “By remembering the death of Jesus Christ at the cross, we remind ourselves of the immense power of love and compassion which is able to tear down walls of prejudice, selfishness, and hatred.”