Pope Francis continued his appeal for nuclear disarmament in Hiroshima on Sunday, insisting that peace means “we must let the weapons fall from our hands.”

Having already spoken out against nuclear arms in Nagasaki earlier in the day, the pontiff continued in the same vein when visiting the Hiroshima peace memorial, where he again condemned not only the use but also the possession of nuclear weapons.

“Future generations will rise to condemn our failure if we spoke of peace but did not act to bring it about among the peoples of the earth,” he said. “How can we speak of peace even as we build terrifying new weapons of war?”

The pope described the Hiroshima bombing of August 6, 1945 as “an incandescent burst of lightning and fire” in which “so many men and women, so many dreams and hopes, disappeared, leaving behind only shadows and silence.”

“In barely an instant, everything was devoured by a black hole of destruction and death,” he said. “From that abyss of silence, we continue even today to hear the cries of those who are no longer.”

This was “a terrifying hour that left its mark forever not only on the history of this country, but on the face of humanity,” he said.

“How can we propose peace if we constantly invoke the threat of nuclear war as a legitimate recourse for the resolution of conflicts?” the pope asked. “A true peace can only be an unarmed peace.” 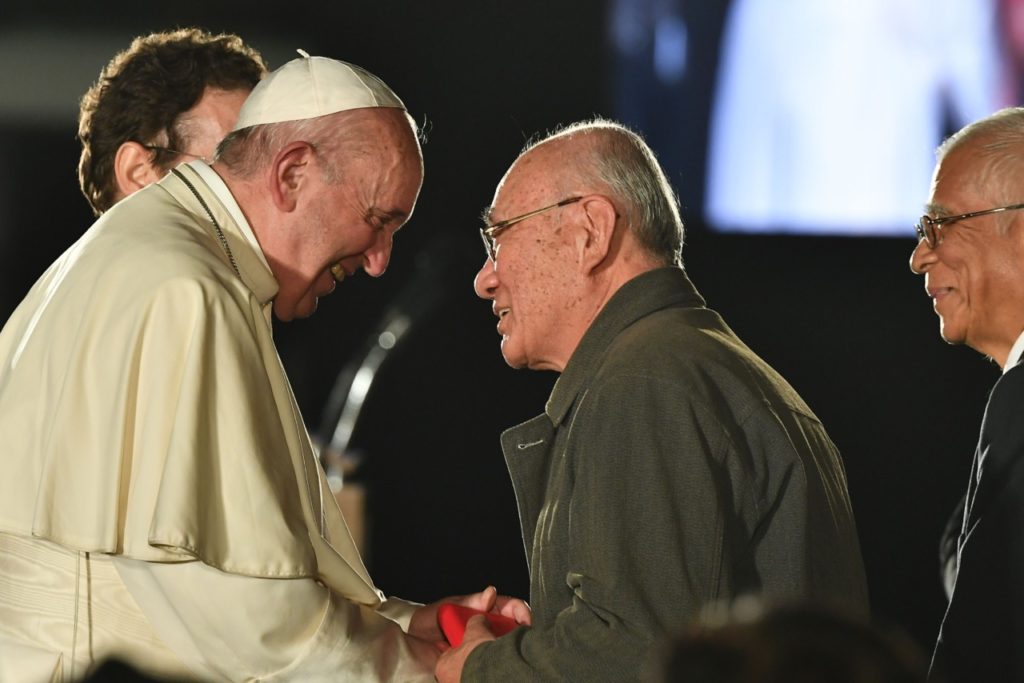 Pope Francis meets survivors of the 1945 atomic bombing during an event held at the Peace Memorial Park in Hiroshima on November 24, 2019. He described the use of nuclear bombs as “a crime”, as he took his appeal for an end to atomic weapons to Hiroshima in an emotional meeeting with survivors. (VINCENZO PINTO/AFP via Getty Images)

“When we yield to the logic of arms and distance ourselves from the practice of dialogue, we forget to our detriment that, even before causing victims and ruination, weapons can create nightmares… and warp the outlook of nations.”

During his visit, the pope insisted that the “memory of what happened here” be kept alive for present and future generations because this memory encourages the building of a more just and fraternal future and awakens the consciences of all men and women to say: “never again!”

“In a single plea to God and to all men and women of good will, on behalf of all the victims of atomic bombings and experiments, and of all conflicts, let us together cry out from our hearts: Never again war, never again the clash of arms, never again so much suffering!” he said.

Francis has often spoken out against weapons, both nuclear and conventional, going so far as to appeal for a ban on all weapons.

If people are really serious about world peace, the solution is to “ban all weapons,” the pope said in May 2018.

The existence of weapons leads humanity to live “in fear of war,” the pope declared, and the only way to remove this fear is to eliminate all weapons.