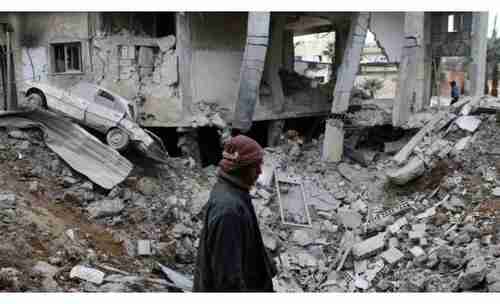 Warplanes belonging to the regime of Syria’s president Bashar al-Assad carried out chlorine gas attacks in Eastern Ghouta, a city in the suburbs of Syria’s capital city Damascus. Health workers said that six people were treated for minor breathing problems.

Canisters of chlorine gas are sometimes called “the poor man’s atom bomb.” They do not kill large numbers of people, but they have a different purpose of forcing large numbers of people out into the open. This is part of the “Grozny strategy” used by Russia’s president Vladimir Putin, so-named because he used it in Grozny in Russia’s 1990s war with Chechnya. In the Grozny strategy, civilians are forced out into the open so that they can be targeted like fish in a barrel and killed in large numbers.

Al-Assad is following the same policy he used a year ago to totally destroy East Aleppo, with 275,000 people, in about six months. Eastern Ghouta has about 400,000 people, so al-Assad has a long way to go. Al-Assad has also targeted Ghouta with several Sarin gas attacks.

In the meantime, his warplanes are specifically targeting hospitals and schools, and the army is preventing food and medicines from entering the region, so that the people can be starved to death. This is the same technique used by al-Assad last year to destroy East Aleppo. BBC and Daily Mail (London) and LA Times (13-Feb-2017) and CNN (7-Sep-2016) and Arms Control Association (17-Nov-2017)

The regime of Syria’s president is pursuing a strategy in Idlib province that could trigger a refugee “catastrophe,” and send hundreds of thousands of Syrian refugees north across the border into Turkey, and from there into Europe.

According to Thomas Garofalo of the International Rescue Committee (IRC):

We are extremely concerned for the safety of the 2.6 million people living in Idlib if the frontline continues to advance. People have told us that they will have no choice but to uproot themselves once again and head further north. They will be heading to displacement camps that are already far beyond capacity, which means their situation will get even worse, in the dead of a wet, cold winter.

Previously, an estimated 1.1 million people have fled to other parts of Syria.

Already, more than 70,000 people have fled their homes and moved further into Idlib to escape the latest wave of al-Assad’s violence. Many have sought refuge near the border with Turkey. Activists say whole villages near the frontline have been abandoned. “There could be a really parlous humanitarian catastrophe,” said one European diplomat.

As hundreds of thousands of refugees flee north toward the border with Turkey, Turkey’s army is prepared to block them from crossing the border. These refugees will be trapped, and they will be sitting ducks as targets of Syrian and Russian airstrikes, including barrel bombs, chlorine, and Sarin. Since Turkey is preventing them from escaping, Turkey will become an active partner in the mass slaughter, and they will be accused of allowing it to happen. Rather than being accused of enabling al-Assad’s mass slaughter, Turkey may well be forced to permit them to cross the border to flee al-Assad’s violence

Another possible scenario is that rather than be blamed for helping the mass slaughter, Turkey may decide to fight the Syrians, and may be joined by Saudi Arabia and United Arab Emirates (UAE). The Generational Dynamics prediction is of a major war, pitting Sunnis versus Shias, Jews versus Arabs, and various ethnic groups against each other, and this is one scenario how it can occur.

No matter which of these scenarios occurs, hundreds of thousands of refugees will pour out of Idlib into Turkey, and then into Europe.

As I have written many times in the past, Bashar al-Assad is the worst genocidal monster so far this century. The Syrian war began in 2011 when al-Assad ordered his army and air force to attack peacefully protesting civilians, including women and children. Things really worsened in August 2011, when al-Assad launched a massive military assault on a large, peaceful Palestinian refugee camp in Latakia, filled with tens of thousands of women and children Palestinians. He dropped barrel bombs laden with metal, chlorine, ammonia, phosphorous, and chemical weapons onto innocent Sunni women and children, he targeted bombs on schools and hospitals, and he used Sarin gas to kill large groups of people.