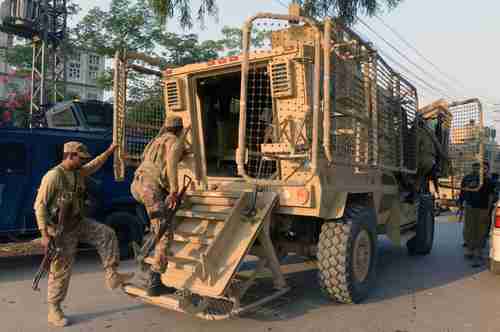 Pakistan army soldiers board an army vehicle in Peshawar on June 24, 2017 (AFP)

In a tweet posted on Monday, Donald Trump wrote:

The United States has foolishly given Pakistan more than 33 billion dollars in aid over the last 15 years, and they have given us nothing but lies & deceit, thinking of our leaders as fools. They give safe haven to the terrorists we hunt in Afghanistan, with little help. No more!

On Tuesday, US Ambassador Nikki Haley at the United Nations announced that Washington would withhold $255 million in assistance to Pakistan. Haley said, “There are clear reasons for this. Pakistan has played a double game for years. They work with us at times, and they also harbor the terrorists that attack our troops in Afghanistan. That game is not acceptable to this administration. We expect far more cooperation from Pakistan in the fight against terrorism.” Haley said that the U.S. may take additional steps.

Although Pakistani officials were infuriated by the tweet, a three-hour meeting of Pakistan’s National Security Committee (NSC) decided that Pakistan must not give any “knee-jerk” reaction to the tweet, and they reached the conclusion that despite “unwarranted allegations, Pakistan cannot act in haste.”

Pakistan’s government did summon the U.S. ambassador and register a protest, but did not take the next logical step of recalling its own ambassador from Washington.

The NSC statement said that the committee was of the firm view that the real challenges in Afghanistan were political infighting, massive corruption, phenomenal growth of drug production and expansion of ungoverned spaces inside the country full of sanctuaries for multiple international terrorist organizations posing a serious and direct threat to Afghanistan, its neighbors and the entire region. Reuters and Express Tribune (Pakistan) and CNN

US-Pakistan relations at a crossroad

Tuesday’s tweet by Trump could not have been a surprise, as it was the culmination of any number of announcements data back years.

In a surprise visit to Kabul, Afghanistan, three weeks ago, vice president Mike Pence warned that it was putting Pakistan “on notice”:

Pakistan has much to gain from partnering with our efforts in Afghanistan. The days to shelter terrorists have gone. It has much to lose by continuing to harbor terrorists.

For too long Pakistan has provided safe haven to the Taliban and many terrorist organizations, but those days are over. President Trump has put Pakistan on notice.

Major General Asif Ghafoor, Pakistan’s chief military spokesperson, responded angrily to Pence’s claims, saying that there was no organized infrastructure of any terrorist outfit inside Pakistan. Ghafoor said that Pakistan will no longer allow itself to be bullied by the United States, and blamed India for the problems in Afghanistan:

We have fought an imposed and imported war twice in Pakistan, and now we cannot do any more for anyone.

The US needs to check India’s anti-Pakistan role not only from inside of Afghanistan but also through the enhanced and increased ceasefire violations along the LoC [Line of Control in Kashmir] and the Working Boundary so that Pakistan remains focused on peace not only in Pakistan but beyond.

Ghafoor read out this statement in English, to make it clear that he was directing it at the United States.

The U.S. has been giving aid to Pakistan ever since 9/11/2001, when America came to depend on Pakistan’s help in the war against the Taliban in Afghanistan. Annual aid to Pakistan peaked at $3.5 billion in 2011, but the relationship with Pakistan was strained by the 2011 raid on al-Qaeda chief Osama bin Laden’s compound in Abbottabad that revealed that he had been hiding in plain sight in Pakistan.

Pakistani officials claimed surprise that bin Laden was hiding out in Pakistan, but those denials have never been believed. Since then, both the Obama administration and Congress have been cutting aid to Pakistan. Funding fell below $1 billion in the 2016 budget request.

So Trump’s decision this week to very publicly cut aid to Pakistan is not something out of the blue but has been coming for several years. China has previously said that it would make up for any aid reduction by the U.S.

I wrote a lengthy analysis in August in “23-Aug-17 World View — Trump promises victory in Afghanistan by redefining ‘victory'”. As I pointed out then, and numerous times in the past, Trump’s foreign policy strategy is completely consistent with the Generational Dynamics analysis of the world. As longtime readers are aware, I have worked on several projects in the past with Steve Bannon, Trump’s former chief adviser. Bannon is an expert on world history and military history and, through our association, is also an expert on Generational Dynamics theory. Mainstream journalists and analysts are mostly completely baffled by Trump’s foreign policy decisions mainly because they have no clue about generational theory.

So Trump knows that we are headed inevitably for war with North Korea, China, and Pakistan, and his policies are guided by that reality. Trump’s very public scathing criticism of Pakistan, and the decision to cut aid, make perfect sense if you realize that there is no point in paying money to a country that you are going to be fighting in a war.

Pakistan’s leaders are generally contemptuous of America’s leaders, but now they have come to a crossroads and have to make a decision. On the one hand, they want American aid, and they want access to a number of American weapons systems. Trump’s harsh message can be paraphrased as follows: Help us in Afghanistan a lot more than you have, and try to win back enough trust to get what you want from America, or else continue as before on the path eventually to cutting all ties with America.

The fact that Pakistan’s government did not yet recall its ambassador to Washington indicates that they realize that this is no easy decision. Geo TV (Pakistan, 22-Dec) and Express Tribune (Pakistan) and Foreign Policy (23-Aug)

Ohhhhhhhh noooooo! Chocolate may be extinct by 2050! 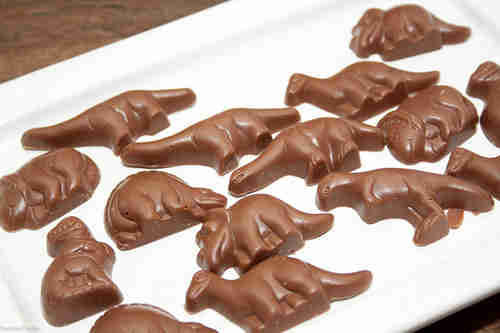 According to the National Oceanic and Atmospheric Administration (NOAA), climate change will force the plants that produce chocolate into extinction by 2050. According to the NOAA, they will die off because the rainforests are disappearing.

Chocolate extinct! Thank goodness I won’t be around to see that! CBS News and National Oceanic and Atmospheric Administration (NOAA)