The Nigerian terror group Boko Haram released video footage on Monday appearing to show four male hostages in their custody in northeastern Nigeria, one of whom said he was an employee of the United Nations Children’s Fund (UNICEF), Nigeria’s Premium Times reported.

“One of the victims, who introduced himself as Zakaria Azirkime, said he is a staff [member] of UNICEF and was abducted on the Maiduguri-Damboa road,” the newspaper revealed on November 22 after reviewing the video footage.

In the video, Azirkime said he was traveling along a road linking Maiduguri to Damboa on October 3 when he was “abducted” by members of Boko Haram.

“I am still in their custody as I speak now today [November 21],” the UNICEF staffer confirmed. 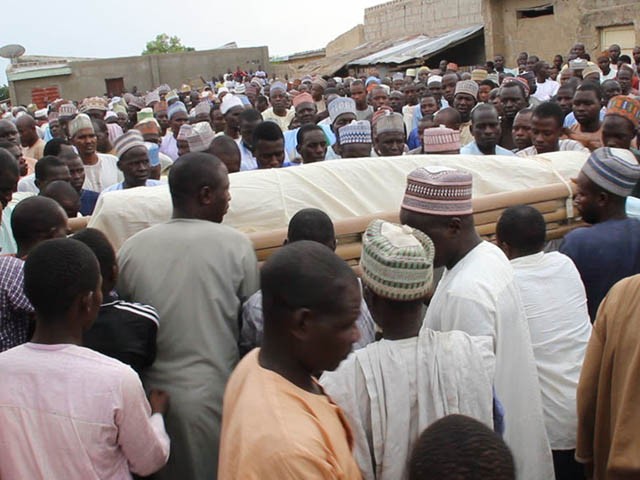 Men carry the bodies during a burial prayer held in Ngala, on December 15, 2019, of the 19 cattle herders that were gunned down by Boko Haram jihadists outside the Fuhe village, near Ngala. (AUDU MARTE/AFP via Getty Images)

Maiduguri is the capital city of northeastern Nigeria’s Borno state and is located approximately 50 miles northeast of Damboa.

Three additional men appeared in the same video as Azirkime on Monday, according to the Premium Times. All men described themselves as having been “abducted” by Boko Haram members while traveling in northeastern Nigeria. Azirkime is the only hostage in the video who identifies himself as working for UNICEF.

“The terrorists did not ask the victims to appeal to family members, government or their employers as they had done in previous videos where victims were given such opportunities,” the Nigerian news site Sahara Reporters noted on Monday.

Boko Haram is a terror group that has waged an Islamist insurgency across northeastern Nigeria and the neighboring Lake Chad region since 2009. The jihadist organization’s stated aim is to establish an Islamic caliphate in West Africa.

The group’s violent campaign has spilled over Nigeria’s northeastern border and into neighboring Niger, Chad, and Cameroon. Boko Haram’s terror attacks have killed an estimated 350,000 people across the Lake Chad region since 2009 and displaced roughly three million others. The conflict has displaced at least 310,000 people within Nigeria alone.

“Founded in the early 2000s as a Salafist Sunni Muslim reform movement, Boko Haram, which roughly translates to ‘Western culture is forbidden,’ has evolved into one of the world’s deadliest Islamist armed groups,” the U.S. Congressional Research Service (CRS) acknowledged in March.

Boko Haram is notorious for kidnappings, often en masse and for ransom. The terror group made international headlines in April 2014 after abducting 276 mostly Christian schoolgirls from a state boarding school in Borno state’s Chibok village. More than 100 of the Chibok schoolgirls remain missing today.