Ethiopian Prime Minister Abiy Ahmed, recipient of the Nobel Peace Prize in 2019, vowed on Wednesday to “bury” his enemies from the rebellious Tigray province in “blood and bones.”

Abiy’s campaign against the Tigrayans has been bloody enough to earn condemnation from the United Nations as borderline genocide, but the Tigray rebels appear to be winning the brutal Ethiopian civil war while committing alleged crimes against humanity themselves.

Abiy’s government declared a six-month nationwide state of emergency on Tuesday as fighters from the Tigrayan People’s Liberation Front (TPLF), the Marxist political party and heavily armed militia, pushed toward the capital of Addis Ababa.

“The state of emergency is aimed to protect civilians from atrocities being committed by the terrorist TPLF group in several parts of the country,” Ethiopia’s state-controlled Fana Broadcasting said on Tuesday.

“The six-month state of emergency allows, among other things, for roadblocks to be established, transport services to be disrupted, curfews to be imposed and for the military to take over in certain areas. Anyone suspected of having links with ‘terrorist’ groups could also be detained without a court warrant, while any citizen who has reached the age of military service could be called to fight,” Al Jazeera News observed.

Justice Minister Gedion Timothewos said the state of emergency was necessary because “our country is facing a grave danger to its existence, sovereignty, and unity,” and that danger cannot be addressed through “the usual law enforcement systems and procedures. 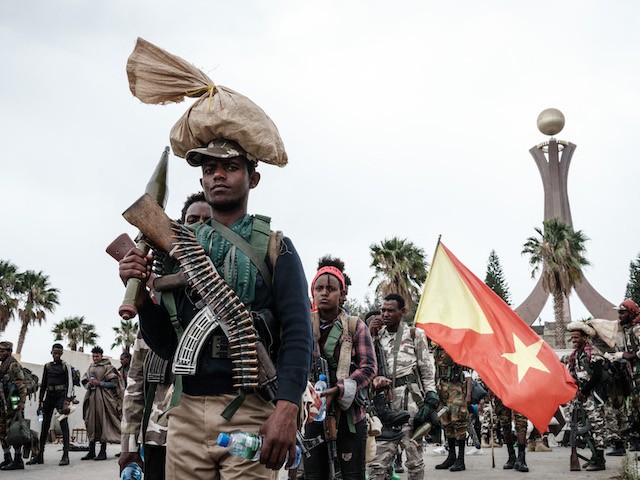 Soldiers of Tigray Defence Force (TDF) prepare to leave for another field at Tigray Martyr’s Memorial Monument Center in Mekele, the capital of Tigray region, Ethiopia, on June 30, 2021. (Yasuyoshi Chiba/AFP via Getty Images)

Timothewos added that Ethiopians who violate the state of emergency, or take any action construed as supporting “terrorist groups,” could face up to ten years in prison.

Addis Ababa officials told city residents to arm themselves and prepare to defend their homes against the TPLF, which is now within 250 miles of the capital.

“Residents can gather in their locality and safeguard their surroundings. Those who have weapons but can’t take part in safeguarding their surroundings are advised to handover the weapon to the government or their close relatives or friends,” the city administration said.

TPLF spokesman Getachew Reda indicated on Tuesday the militia is considering a march on Addis Ababa and has plans to establish a new government after deposing and arresting Abiy, who will “have his day in court.”

Abiy gave a speech at military headquarters in Addis Ababa on Wednesday in which he vowed to defeat the TPLF by any means necessary.

“The pit which is dug will be very deep, it will be where the enemy is buried, not where Ethiopia disintegrates,” he said.

“We will bury this enemy with our blood and bones and make the glory of Ethiopia high again,” he promised.

Abiy’s speech was accompanied by a candlelight ceremony and moment of silence for the casualties from the event that marked the beginning of Ethiopia’s civil war: the November 2020 raid on a federal army base in Tigray by the TPLF and its allies.

The Tigrayans ultimately captured the base, seized many of its heavy weapons, and took several hundred soldiers prisoner. Casualty reports from both sides have been disputed, but all observers agree there was a considerable amount of gunfire in the 10-day siege. 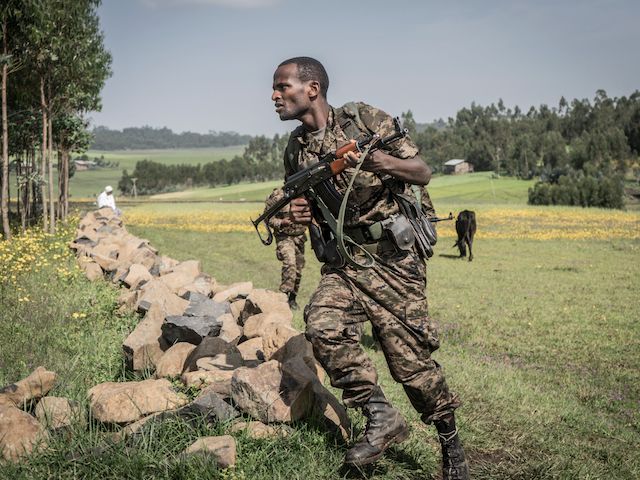 Abiy’s government responded with a military assault that seemed to overwhelm the TPLF at first, but Tigrayan forces rallied and began pushing outside their regional borders. Over the weekend they captured two key towns along the highway leading to Addis Ababa, paving the way for a possible assault on the capital.

“We will repel them with full force,” Abiy told Ethiopian lawmakers on Monday, urging citizens to “use any type of weapon” against the advancing Tigrayans.

“Dying for Ethiopia is a duty for all of us,” he said ominously.

The United Nations took note of all the dying and suffering in Ethiopia’s civil war on Wednesday, denouncing the “extreme brutality” displayed by all parties to the conflict, including tribal militias and soldiers from neighboring Eritrea who crossed the border with Abiy’s blessing to fight the Tigrayans.

The U.N. human rights office criticized both Abiy’s government and the TPLF for refusing to cooperate with its investigators and noted its monitors were unable to visit some of the bloodiest sites of the conflict due to security concerns and active interference from Abiy’s government. This criticism was all the more remarkable because the U.N. has been working in partnership with a human rights commission established by the Ethiopian government.

Prime Minister Abiy’s office oddly portrayed the damning U.N.-Ethiopian Human Rights Commission report released on Tuesday as vindication, claiming it “clearly established the claim of genocide as false and utterly lacking in any factual bases” and insisting it put “sinister allegations” against the government to rest. Abiy’s official statement did, however, promise to establish a high-level task force to investigate allegations of abuse.

Two specific allegations the U.N. investigation cast doubt upon were charges that some of the worst abuses were perpetrated against Tigrayans by Eritrean forces, and that starvation was used as a weapon against the Tigrayans by the government. Investigators did not conclusively refute those charges but said they could not find enough evidence to prove them.

“Some of the absolutely worst violations were committed by the Eritrean defense forces,” U.S. Horn of Africa envoy Jeffrey Feltman insisted on Tuesday, apparently disputing the conclusions in the U.N. report.

Feltman also said it was a fact that “the Ethiopian government began cutting off humanitarian relief and commercial access to Tigray in June,” and said those practices continue “despite horrifying conditions of reported widespread famine.”

The U.S. terminated Ethiopia’s special trade status on Tuesday and is reportedly considering targeted sanctions against both Abiy’s government and the TPLF to keep the conflict from escalating further. 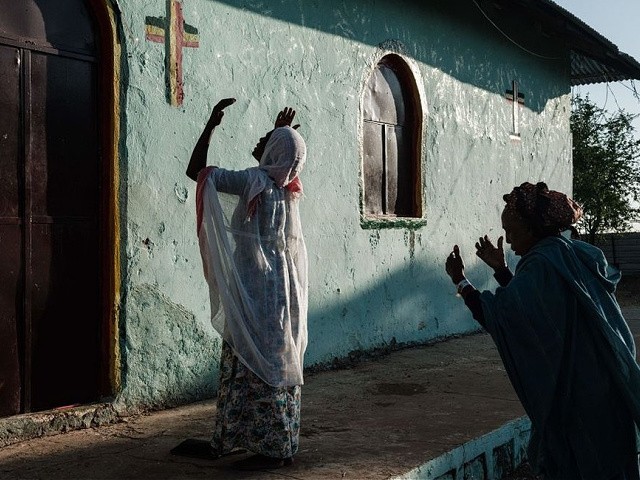 An Ethiopian refugee who fled the Tigray conflict prays during Sunday Mass at an Ethiopian Orthodox church building built by former Ethiopian refugees, at the village next to Um Raquba refugee camp in Gedaref, eastern Sudan. (YASUYOSHI CHIBA/AFP via Getty Images)

Two sources told the Associated Press that the U.S. State Department has prepared a charge of genocide against the Ethiopian government, but added it was “unclear whether Secretary of State Antony Blinken will sign it, and when.”

Feltman noted the suspension of Ethiopia’s trade status will not take effect until January 1, so it is possible for Abiy’s government to take steps that would lead the Biden administration to reconsider its decision.

“It’s not too late to retrace our steps toward the path not taken, but the change in direction must occur in days, not weeks,” he said.

Feltman also condemned the TPLF for its “expansion of the war outside Tigray” and called on its forces to withdraw from the towns captured over the weekend.

Ethiopia’s trade ministry said it was “disappointed” by the Biden administration’s action, which it warned could “reverse significant economic gains in our country and unfairly impact and harm women and children.”

“We urge the United States to support our ongoing efforts to restore peace and the rule of law, not punish our people for confronting an insurgent force that is attempting to bring down our democratically elected government,” the Ethiopian ministry said.