Afghanistan’s only all-girls’ boarding school announced plans Tuesday to relocate to Rwanda to protect its students from the Taliban terror group, which seized control of Afghanistan on August 15 and previously forbid girls from receiving an education the last time it ruled the country from 1996-2001.

“SOLA is resettling, but our resettlement is not permanent,” she said.

“When circumstances on the ground permit, we hope to return home to Afghanistan,” Basij-Rasikh added.

The educator wrote that SOLA’s students and staff were then en route, by way of Qatar, to Rwanda, a central African nation that has agreed to temporarily house Afghan refugees following a request by the U.S. government. 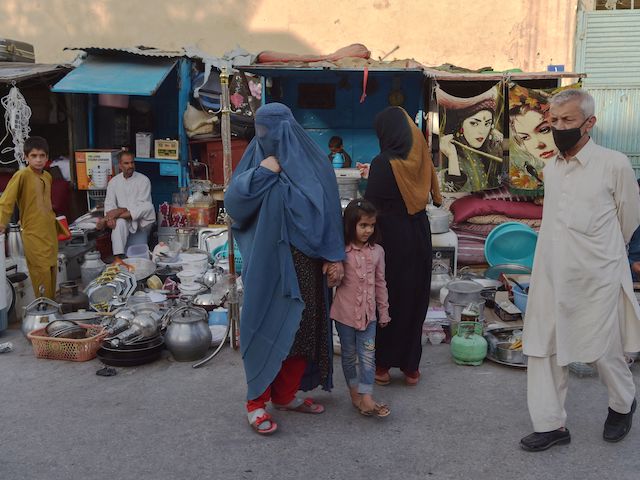 A burqa-clad Afghan woman looks for items to buy at a shop displaying used household items for sale at a market area in Kabul on August 25, 2021, which were earlier purchased from the people who faced financial adversities and those who fled the country after the Taliban’s military takeover of Afghanistan. (Wakil Kohsar/AFP via Getty Images)

“We rwandans know what is to be a refugee even in your own country. Most welcome to our sisters and brothers from Afghanistan [sic],” the Ministry wrote.

The Taliban deposed Kabul’s U.S.-backed government on August 15, plunging Afghanistan into chaos. Thousands of Afghans and foreign nationals residing in Afghanistan have been attempting to evacuate the country since then. Washington has asked Rwanda, Uganda, Albania, North Macedonia, and Kosovo to accept Afghan refugees in recent days. Uganda has agreed to take in 2,000 Afghans; Albania will house 300; and North Macedonia will accept 450. Kosovo has agreed to temporarily host Afghan refugees whose ultimate destination will be in the U.S. but has not specified how many it will take in.

The administration of U.S. President Joe Biden “has not announced exactly how many Afghan refugees will be taken in by the U.S., but has committed to resettling up to 125,000 refuges in the 2022 fiscal year,” Newsweek reported on August 26.