Uganda on Tuesday agreed to receive and temporarily house 2,000 Afghan refugees at the request of the U.S. government, Reuters reported.

“The request was made yesterday by the U.S. government to H.E. (President Yoweri Museveni) and he has given them an OK to bring 2,000 (Afghan) refugees to Uganda,” Esther Anyakun Davinia, Uganda’s junior minister for relief, disaster preparedness, and refugees, told Reuters on August 17. 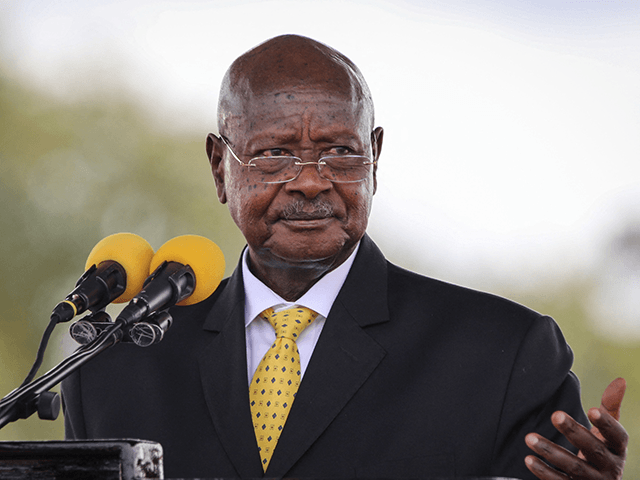 Ugandan President Yoweri Museveni speaks during the inauguration ceremony for his sixth term at Kololo Ceremonial Grounds in Kampala, Uganda, on May 12, 2021. (Photo by Badru KATUMBA / AFP) (Photo by BADRU KATUMBA/AFP via Getty Images)

“They are going to be here temporarily for three months before the U.S. government resettles them elsewhere,” Davinia added. She did not reveal when the refugees would begin arriving in Uganda.

“Albania and Kosovo have also accepted a U.S. request to temporarily take in Afghan refugees,” according to Reuters.

Davinia did not provide an explanation as to why the U.S. has chosen Uganda as an Afghan refugee recipient, though the country “has a long history of welcoming refugees,” the BBC reported Tuesday.

“The East African nation has the largest number of refugees in any country in Africa — and the third-largest in the world,” according to the British broadcaster.

East Africa neighbors the Arabian Peninsula, which itself is home to Qatar. At least 640 Afghan refugees landed in Qatar from Afghanistan on August 15, though their final destination remains unknown. The administration of U.S. President Joe Biden was reportedly working on a deal with Qatar as of August 14 for the peninsular Arab nation to receive roughly 8,000 Afghan refugees, a U.S. State Department spokesperson told CNN anonymously.

Uganda is a well-established ally of the U.S. and receives nearly $1 billion dollars annually from the U.S. government in financial aid. Its location in East Africa and its close relationship with the U.S. make it a prime candidate for accepting Afghan refugees at Washington’s request.

Hundreds of Afghans have fled Afghanistan for neighboring Central Asian states, such as Tajikistan, in recent weeks to escape a resurgence of the Taliban terror group across the country. The jihadist group took advantage of President Joe Biden delaying the U.S. troop withdrawal from Afghanistan to stage a comeback, steadily reconquering major cities and provinces for weeks before closing in on Kabul, the seat of the Afghan government and national capital, on August 14. The Taliban penetrated Kabul on August 15 as thousands of Afghans mobbed the city’s airport in a desperate attempt to flee the fallen capital.

Chaos unfolded at Hamid Karzai International Airport on Sunday as Afghans surrounded planes attempting to depart, interrupting service on the site’s airstrip. Harrowing video footage of the scene showed a handful of Afghans fall through the air and, likely, to their deaths after tragically attempting to cling on to the tires of an actively departing plane.

A better angle that shows the falling men from the US airplane while taking off from the Kabul airport pic.twitter.com/Yw59jQXJww

At least 640 Afghans managed to rush onto a U.S. military aircraft designed to hold just 150 people on August 15.

"The Crew Made the Decision to Go:" Inside Reach 871, A US C-17 Packed With 640 Afghans Trying to Escape the Taliban | @TaraCopp and @MarcusReports https://t.co/lf3LajxzzX pic.twitter.com/JH5Yrkwet4

“The C-17, using the call sign Reach 871, was not intending to take on such a large load, but panicked Afghans who had been cleared to evacuate pulled themselves onto the C-17’s half-open ramp,” an unnamed U.S. defense official told the news site Defense One, which published a stunning photo of the packed aircraft.

“Approximately 640 Afghan civilians disembarked the aircraft when it arrived at its destination,” the defense official said.

The C-17 reportedly arrived in Qatar on Sunday. Qatar is located along the Persian Gulf, not far from East Africa, which itself is home to Uganda.

The U.S. Air Force said human remains were found in the C-17’s wheel well after it arrived in Qatar on August 15 and that it was currently investigating the sobering discovery. The U.S. Air Force further revealed that the Afghans shown in viral social media videos falling from a plane departing Hamid Karzai International Airport on Sunday were likely attempting to board the same C-17, adding that it was still probing the matter.