Amnesty International (AI) published a report on Tuesday that accused forces loyal to the government of Ethiopia – including troops from neighboring Eritrea and militia recruited from the Amhara tribe – of using systematic rape as a weapon against the insurgents of Tigray province.

The report, which took its title I Don’t Know If They Realized I Was a Person from the testimony of a pregnant 20-year-old Tigrayan woman who said she was gang-raped in her family home by three Amhara militia fighters in November, charged members of the Ethiopian and Eritrean military, Amhara regional police, and members of the Amhara Fano militia with widespread sexual assault, sexual slavery, sexual mutilation, and other forms of torture.

“It’s clear that rape and sexual violence have been used as a weapon of war to inflict lasting physical and psychological damage on women and girls in Tigray. Hundreds have been subjected to brutal treatment aimed at degrading and dehumanizing them,” said AI Secretary-General Anges Callamard.

“The severity and scale of the sexual crimes committed are particularly shocking, amounting to war crimes and possible crimes against humanity. It makes a mockery of the central tenets of humanity. It must stop,” Callamard said, calling on the African Union (AU) to step in and ensure the government of Ethiopian President Abiy Ahmed does so.

The conflict in Tigray has been building ever since current Prime Minister Abiy Ahmed took power in 2018. Abiy won the Nobel Peace Prize in 2019 for his contributions to ending the longstanding conflict with neighboring Eritrea and was welcomed as a determined reformer by much of the international community. 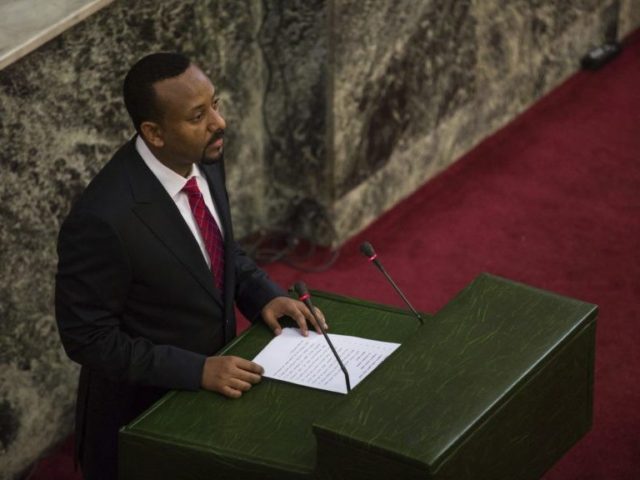 In this Monday, April 2, 2018 file photo, Abiy Ahmed, the newly elected chair of the Ethiopian Peoples’ Revolutionary Democratic Front (EPRDF) addresses Ethiopian lawmakers after he was sworn in as the country’s Prime Minister in Addis Ababa. (Mulugeta Ayene/AP Photo, file)

Abiy was much less welcomed by the Tigrayans, who were the politically dominant minority in Ethiopia before his reforms dislodged a great many ethnic Tigray from power. Abiy himself hails from the Oromo, the largest of Ethiopia’s ethnic groups.

When Abiy cited the coronavirus pandemic to delay elections in August 2020, Tigray held its own. Abiy ruled the Tigray elections were illegal and the political conflict erupted into violence in November when Tigrayan militia occupied a government military base.

The Tigrayan insurgency has grown steadily worse, especially after the militant Tigray People’s Liberation Front (TPLF) – a Marxist political organization classified as terrorists by the Abiy government – came back from a seeming military defeat in June and began invading the adjacent Amhara and Afar provinces.

Abiy issued a public call last week for “all capable citizens” to join the national military or Amharan paramilitary units to fight the TPLF, abandoning all pretenses of a ceasefire. Critics feared Abiy’s call to battle could become a campaign of ethnic cleansing against Tigraynas, while Amhara officials warned the TPLF would continue slaughtering their people unless they were stopped.

Alleged human rights violations have been perpetrated by all sides, including accusations against Eritrean troops helping Abiy’s forces subdue Tigray – which lies along the Eritrean border and has long memories of brutal invasions from Eritrea.

Further complicating the dismal humanitarian situation are large camps in Tigray packed with Eritrean refugees, who fear persecution by Eritrean troops. At least two of those camps have been completely destroyed since the beginning of this year and the United Nations has relocated others for the safety of the refugees. 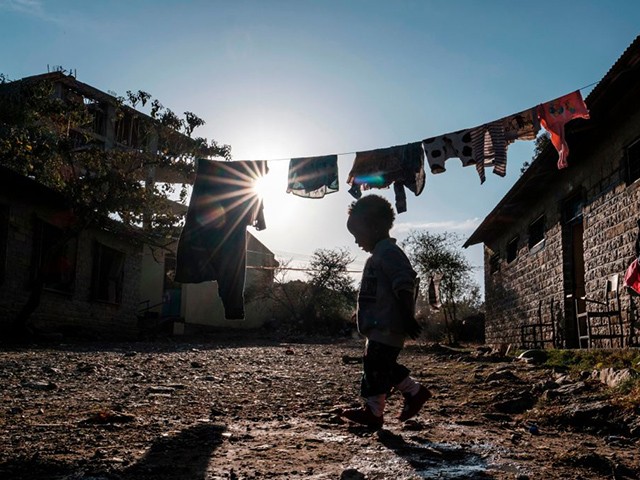 A displaced child from Western Tigray walks outside of a classroom in the school where the family is sheltering in Tigray’s capital Mekele on February 24, 2021. (Eduaro Soteras/AFP via Getty Images)

Amnesty International’s report detailed the use of sexual assault as a weapon against Tigrayan women, observing that deliberate efforts were made to dehumanize and demoralize the victims and their families, including the use of ethnic slurs against the vicitms.

Eritrean soldiers were involved in 38 of the 63 incidents documented by AI. The victims were “as young as 10 and as old as 62,” according to AI managing director Adotei Akwei. Some of the women said they were brutalized in front of their children.

“They gathered like a hyena that saw something to eat,” one Tigrayan woman said of the Eritrean soldiers who assaulted her. “They raped the women and slaughtered the men.”

AI said Tigrayan health facilities logged 1,288 cases of “gender-based violence” between February and April, but many of the survivors interviewed for the report said they did not seek care at the facilities, suggesting the total number of sexual assaults could be much higher.

“Two survivors had large nails, gravel, and other types of metal and plastic shrapnel inserted into their vaginas, causing lasting and possibly irreparable damage,” AI reported.

The governments of both Ethiopia and Eritrea denied Amnesty International’s allegations. The Ethiopian Foreign Ministry claimed the AI report was “based on a flawed methodology” and made “sweeping and far-reaching conclusions that could hardly be supported by the limited and remote ‘investigation.’”

Other Ethiopian ministries insisted their government takes allegations of rape seriously and is investigating all credible accusations. Ethiopian Women’s Minister Filsan Abdullahi admitted in February that her agency’s task force “unfortunately established rape has taken place, conclusively and without a doubt.”

Eritrea accused AI of having a “hostile agenda” and said the organization is running a “regime change” operation against it. Eritrean Information Minister Yemane Gebremeskel claimed many of the women interviewed by AI for its report were TPLF operatives making “false accusations” for propaganda purposes.

“The AI report is transparently unprofessional and it is evident that the AI makes no effort to get the facts right and cross-check the veracity of the allegations. Sadly, this is not the first time for the AI to level politically motivated, defamatory attacks against,” Gebremeskel said. 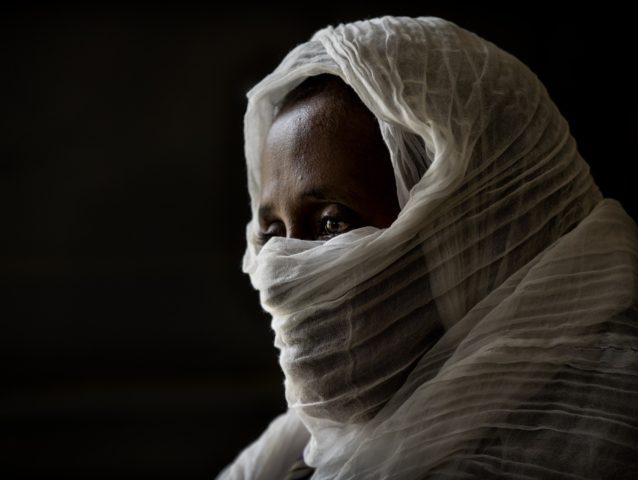 In this Friday, May 14, 2021 file photo, a 40-year-old woman who was says she was held captive and repeatedly raped by 15 Eritrean soldiers over a period of a week in a remote village near the Eritrea border, speaks during an interview at a hospital in Mekele, in the Tigray region of northern Ethiopia (Ben Curtis/AP Photo, File)

Abiy won a resounding re-election victory in July (in an election deemed “significantly flawed” by the U.S. government), but the UK Guardian observed that atrocities like those reported by AI have “galvanized previously apolitical Tigrayans into backing the TPLF” in what they increasingly see as “a fight for survival.”

The latest twist, reported by AFP on Thursday, is that a militant group calling itself the Oromo Liberation Army (OLA) has announced an alliance with the TPLF against the “dictatorship” of Prime Minister Abiy.

The Ethiopian government regards the OLA as a terrorist organization and said it was “not surprising” to see it join forces with the TPLF. The government accuses the OLA of conducting massacres against the Amhara.

“The government and the people of Ethiopia together will deploy all means necessary to prevent the terrorist TPLF from spiralling the country into further instability,” a spokeswoman for Abiy said on Thursday.